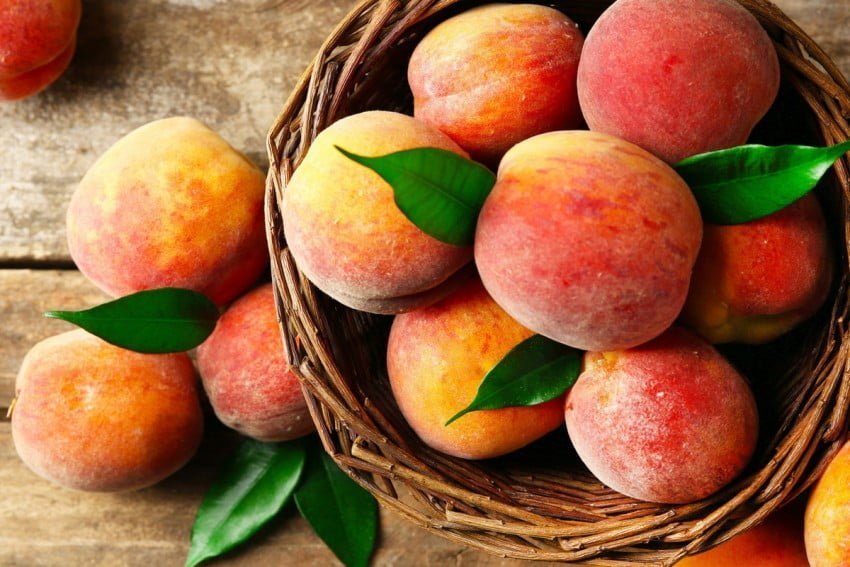 EastFruit analysts note that the beginning of the season for large peach exports from the Fergana Valley, Uzbekistan in 2021 was marked by their relatively high prices. The average wholesale price for peaches in the country is now on average twice as high as usual price at this period.

Will traditional sales markets pay $ 1 more for Uzbek peaches, or will Uzbekistan give way to its competitors this year, as it happened with apricots and cherries? Let’s figure it out.

Peaches are the second most important source of export revenue in the fruit segment of Uzbekistan, after fresh table grapes. In 2020, almost 86 thousand tons of peaches worth about $ 65 million were exported. Cherries brought even less revenue to Uzbekistan than peaches last year! No wonder farmers of Uzbekistan reduce apricot plantations in favor of peaches.

Bulk of Uzbek peaches is exported to Russia directly, as well as through Kyrgyzstan and Kazakhstan, although they also consume peaches from Uzbekistan. Uzbekistan recently began to export peaches to Turkmenistan, and small volumes were exported to the UAE, Tajikistan, Afghanistan, Belarus and Mongolia.

Can Russia pay a higher price for peaches this year? By monitoring EastFruit wholesale prices, it is easy to see that the average fresh peach prices in Russia are currently lower than in Uzbekistan. By the way, Uzbekistan currently has the highest wholesale price for peaches in the region. For example, fresh peaches in Tajikistan are currently sold 3.5 times cheaper than in Uzbekistan. Even in countries where peach harvesting has not yet begun, such as Moldova and Poland, prices for peaches are lower because they are imported from Greece and Turkey at a lower price. Only in Ukraine and Belarus the prices for peaches are the same as in Uzbekistan.

What should be done with peaches? Why did the Department of the Republic’s Customs Committee for the Fergana Region announce the start of large-scale peach exports? Where are they exported to?

Uzbek peaches are exported mainly to the Asian regions of Russia and the northern regions of Kazakhstan, where prices are higher than the national average and where the influence of Turkish exports is not that big. However, export volumes are most likely not high enough yet, otherwise prices would be lower than they are now.

Despite the almost complete absence of Uzbek peaches on the Russian market, peach prices in Russia are now the lowest in the past few years. Peaches in Russia were wholesaled at $ 2 per kg average in mid-June last year, at $ 3.4 per kg in 2019, and at only $ 1.6 per kg this year. This means that the export of Turkish peaches to Russia has increased significantly this year. Turkey is the leader in the export of peaches to Russia by a huge margin from others. Last year, it exported 122 thousand tons of peaches to the Russian Federation, and Uzbekistan exported only 35 thousand tons. Accordingly, one cannot exaggerate the influence of Uzbekistan on the Russian peach market.

It is obvious that prices for peaches may begin to decline dynamically in the near future in Uzbekistan to stimulate export. It is quite possible that the price this year will even repeat the path of cherries price  that was much higher at the beginning of the season than a year earlier and ends the season at a lower level than last year. Otherwise, a high demand for peaches from Uzbekistan is not expected – after all, peaches from Moldova, Serbia and even the southern regions of Russia will become available on the market in a few weeks.

According to the State Statistics Committee of Uzbekistan, as of August 1, 2020, the share of the Fergana region in the total export of peaches from the country amounted to 35%. Probably, the tendency to increase peach plantations in Fergana region due to the reduction of apricot orchards (mainly local varieties) allowed this region to become an absolute leader among 13 regions producers of fruit and vegetable in terms of peach exports. The second place was taken by the Namangan region of the Fergana Valley (17%), the third by the Tashkent region (16%), and the fourth by the Khorezm region (12%). Overall, about 80% of peach exports were shipped from these four regions, with more than half from the Fergana Valley.

In the past few years, Uzbekistan has been actively increasing the export of peaches, and it has been one of the ten largest exporters in the world since 2018. In 2020, Uzbekistan ranked 5th in terms of the physical volume of peach exports and 8th in the world in value terms. 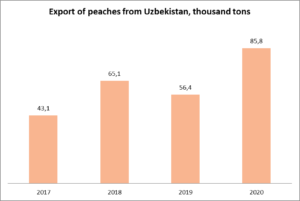 In 2021, Uzbek peach exports are unlikely to reach last year’s record levels due to a likely decline in Uzbekistan’s peach harvest due to frosts in late February and mid-March. However, it should be noted that the main regions for the export of peaches, the Fergana Valley and the Khorezm region, suffered to a lesser extent. However, the damage from frost in the central and southern part of Uzbekistan for peach orchards was significant. At the end of March, the damage to the peach crop from weather anomalies in the central and southern parts of the country was estimated from 50% to 70%.