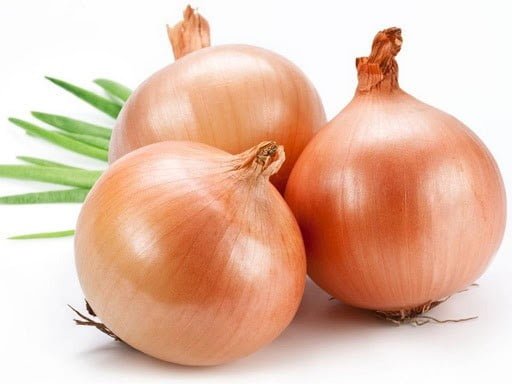 Market participants in Eastern Europe and Central Asia are discussing the prospect of onion prices reaching $1/kg in wholesale trade. This means that retail prices can reach an unprecedented $1.5-$2.0/kg!

How possible is this, is this unique, and what is the reason for such gloomy forecasts? EastFruit experts analyzed the onion market in Iran, Pakistan, Uzbekistan, the Netherlands, Poland, Tajikistan, Ukraine, Georgia, Moldova, Kazakhstan, and Turkey and offer their preliminary conclusions in this article.

Starting from the second half of September 2022, the volume of international trade in onions has increased sharply in the markets of the EastFruit project countries. The main reason for increased demand was the expected repeat of the 2018/19 season, when, due to drought and poor harvest in the EU countries in the summer of 2018, even Central Asian countries exported onions to Poland, Romania, Germany, the Netherlands, and other countries in the region. There was a shortage of onions on the market and an acute shortage of onions of large calibers (more than 60 mm) used for processing. Since there was also a severe drought in the EU countries in 2022, primarily in the world’s main exporter of onions, the Netherlands, the prices started rising in the summer.

However, many European traders did not take into account another important factor – the occupation of the south of Ukraine by Russian troops, where about 80% of the commercial onion production of the largest European country is concentrated. Ukraine annually exported about 20 000 tonnes of fresh onions, and the exports even exceeded 50 000 tonnes in some seasons.

Onion production in the southern regions of Ukraine dropped sharply after the occupation by the Russian army, and onions that farmers managed to grow were not suitable for supplies to other regions of Ukraine and to the EU. Unexpectedly, Ukraine has become a major importer of onions from Poland, Romania, Moldova, Azerbaijan, Kazakhstan, and Turkey, which also contributed to the growth of onion prices in the region. By the way, Ukraine used to regularly export onions to some of the countries from which it had to import in 2022. No wonder the prices were so high.

In mid-June 2022, there were floods in Pakistan, which destroyed, among other things, a huge part of the onion crops. As a result, Pakistan, which is one of the world’s largest exporters of onions, has become an importer. Iran, Uzbekistan, Turkey, and even Afghanistan started supplying onions to Pakistan. Uzbekistan exported about 26 000 tonnes of onions to Pakistan after the flood and until November 2022 inclusive.

Not surprisingly, prices kept rising in all regions as there were problems in almost every one of them.

Frosts as a new trigger for rapid price growth

We have written a lot about the effects of frost in Central Asia on the onion market recently. It turned out that the anomalous frosts that came from Russia to Uzbekistan, Tajikistan, Kazakhstan, and Kyrgyzstan destroyed the huge stocks of onions stored in uninsulated warehouses in the region. As a result, Kazakhstan banned the export of onions fearing a shortage in the domestic market. Uzbekistan has turned from a net exporter into a net importer of onions, and traders are actively looking for large volumes of onions in the countries of the region.

However, Central Asia is far from major supplying countries, and the transportation of onions will be very expensive. Besides, it is unclear what happens to the new crop of early onions in the southern regions of the country since frost could also damage it.

Will there be price records? Forecast for Poland, Ukraine, Uzbekistan, and Tajikistan.

As for now, neither in Europe nor in the countries of Central Asia, wholesale prices for onions have not yet exceeded record figures. However, they are already record-breaking for this period of the year, which means that absolute records can be broken, too.

Most market participants have no doubts that prices in Central Asia will exceed absolute record levels soon, and in Europe, they may well reach and exceed them by spring.

What were the prices for onions in these regions in the past, and when did they peak? 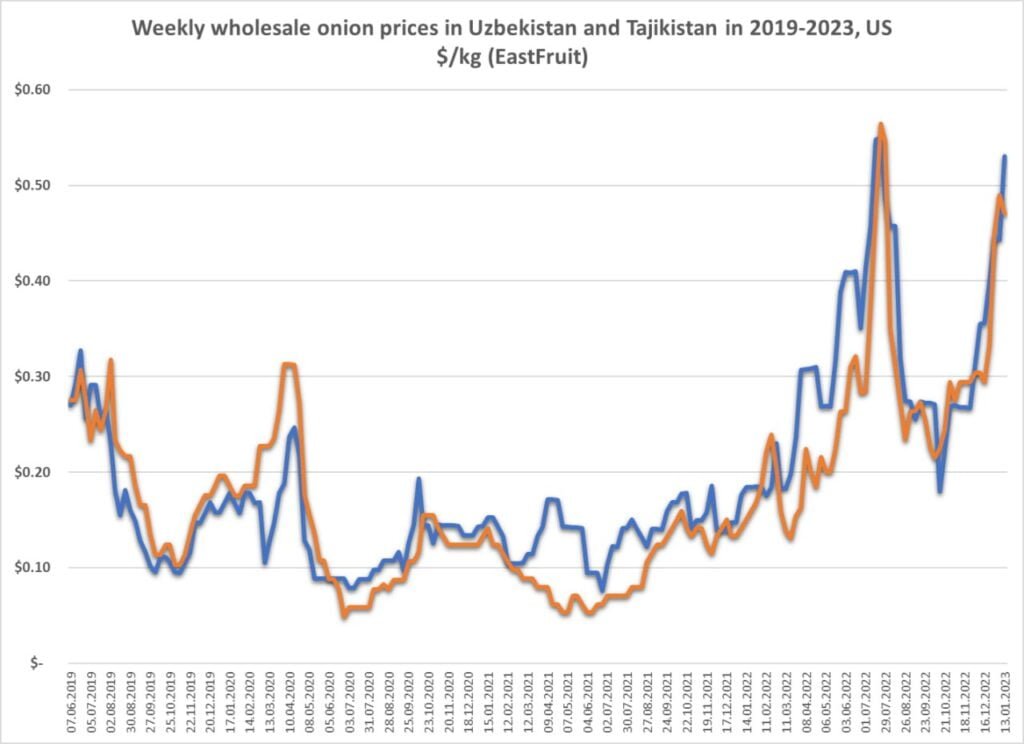 As you see in the chart, wholesale onion prices in Tajikistan and Uzbekistan are approaching record highs in the summer of 2022. Meanwhile, they are already record-breaking for this time of the year.

As of the end of the last week, wholesale prices for onions in Uzbekistan were 2.8 times higher than last year, and in Tajikistan – 3.1 times higher! Wholesale prices for onions in both countries are expected to reach $0.60/kg as early as this week, which will be an absolute record. Prices in Uzbekistan and Tajikistan usually range from $0.12/kg to $0.20/kg in wholesale trade at this time.

By the way, Tajikistan has already banned the export of onions this season – this happened in August last year. Therefore, a new ban can also be imposed, although it is not necessary since domestic prices are too high to export. However, prices are even higher in neighboring Afghanistan, so, everything is possible. 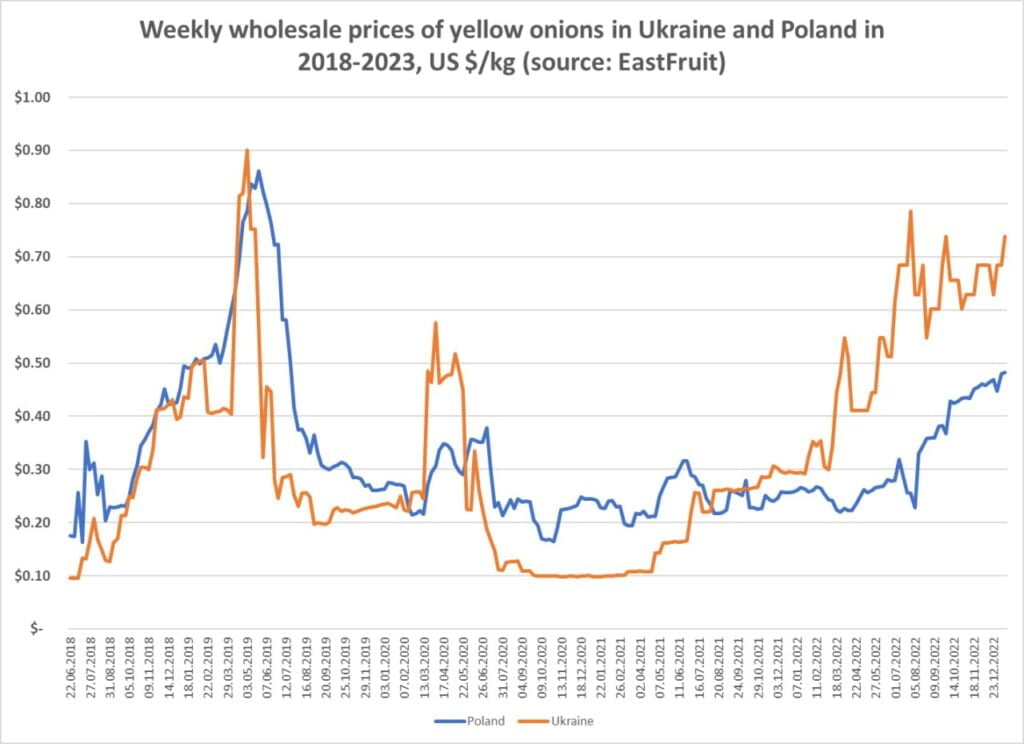 There were similar trends this season in Ukraine and Poland, where prices are well correlated, but they differed much since Ukraine started importing from Poland, while it used to export onions there.

As can be seen from the graph, prices in Poland are still far from the records of spring 2019, and prices in Ukraine are approaching them. Please note that prices are in USD. As for local currency, the wholesale price in Ukraine is exceeding the record level of early May 2019.

Compared to mid-January 2021, wholesale prices for onions are 81% higher than last year in Poland, and 2.5 times higher in Ukraine. The ban on the export of onions from Kazakhstan may lead to faster growth in onion prices in Ukraine as it also imported Kazakh onions. Besides, given the tense situation in the regional onion market, and the fact that there are still five months left before the new harvest, a further increase in onion prices in Ukraine is expected.

Similarly, onion prices in Poland in the spring may well exceed the records of 2019, when they reached $0.90/kg.

From March 23 to April 22, 2023, Muslims around the world celebrate the holy month of Ramadan. As a rule, the volume of purchases of various products, including onions, is growing during this period. In the countries of Central Asia, a lot of pilaf is traditionally consumed at this time. And as a rule, the highest quality products are bought.

Although early onions will already be available in the southern regions of Uzbekistan and Tajikistan at this time, last year’s onions (and carrots, too) are needed for high-quality pilaf. Therefore, we should expect a sharp increase in demand for onions in the region in the first half of March. Perhaps it is by the second half of April that onion prices in Central Asia can reach their maximum.

Turkey – prices are too high

The Turkish market reacted promptly to the high demand for onions, and their wholesale prices from the field rose to $0.30 at the beginning of the season. The current wholesale price is approaching $0.60/kg. Strong demand is supported by a large domestic market, as well as onion exports to Iraq. The new harvest is expected in the second half of April in 2023, so there are no prerequisites for reducing wholesale prices when shipping onions from Turkey.

The current wholesale prices for onions in Iran range from $0.40 to $0.50/kg, depending on the region. It is too high for Iran, where onion prices are usually much lower during this time.

Pakistan and Iraq remain the main buyers of Iranian onions. If wholesale prices in Russia increase sharply due to the ban on the export of Kazakh onions, the exports of new crop onions from Iran can be increased. Onions of a new harvest will become available in the coming weeks there. At the same time, given transportation costs, onion supplies from Iran are unlikely to help stop the growth of wholesale onion prices in Central Asia.

It borders Tajikistan and Pakistan and influences the pricing of onions in Uzbekistan and Tajikistan. Floods in Pakistan also affected Afghanistan leading to the loss of part of the crop. However, Afghanistan exported onions to Pakistan after the harvest started because prices were higher there.

Current retail prices for onions in Kabul exceed $4/kg, and the Taliban government promises to solve the issue of high prices by importing onions from Uzbekistan. This is quite realistic at the current level of prices in Uzbekistan – Afghan importers can pay more than local buyers. However, as we see, Uzbekistan may not have enough onion stocks before the start of the new season.

Having started exporting onions to Ukraine in the fall, wholesale companies quickly increased prices from $0.15 to $0.30/kg. Wholesale prices for onions rose to $0.40 by the New Year, one of the reasons being an increase in demand from Georgia, which imports onions from Azerbaijan.

After the ban on the export of Kazakh onions demand for Azerbaijani onions will increase sharply, primarily from Georgia, which annually imports about 30 000 tonnes. This will lead to an increase in wholesale prices. The growth of demand from the countries of Central Asia is also expected.

At the beginning of 2023, the wholesale price for onions rose to $0.60, and further growth is likely to continue until May when a new crop of onions from Turkey, Iran, or Egypt becomes available.

Onion prices in Moldova are growing dynamically but they are still lower than those in many countries of the region. However, prices close to $0.50/kg are record high for Moldova, especially for this period. Prices were almost two times lower last year.

Despite the record level of onion prices, the prospects for their growth in Moldova are obvious – the stocks are most likely lower than last year, due to exports to Ukraine and Romania in autumn and December 2022.

This price level creates positive price expectations for exporters from Egypt, Turkey, Spain, and South Africa, who expect to exceed 2019 sales volumes. They competed with onions from China and Central Asia in the EU market then. In 2023, Chinese onions are not expected on the EU market, and Central Asia itself needs to import them.

China exports onions mainly to Asian countries this season, since logistics does not yet allow delivery to the EU, and Chinese products do not always meet the EU minimum requirements in terms of quality. However, if prices keep growing so fast, this may change.

The global situation in the onion market looks uniquely tense. Just think about it – retail prices for onions in the Philippines have reached $12/kg! That is, onions are more expensive than meat there, and stories of pilots smuggling onions into the country are reported! The problem is that onion imports are regulated by the state there, but as we see, onion prices in other countries are close to record levels or have already exceeded them.

As for now, it is not clear how the gap in the onion market can be filled. After all, onions cannot be replaced with other products in recipes. One can only hope that there will be a good onion harvest in Egypt expected to start in March-April 2023. Obviously, importers in the Middle East, Europe, and Asia have lined up for onions from Egypt.

In our opinion, the prospects for onion price growth in the coming months in Eastern Europe, Central Asia, and the Caucasus are very clear. New price records this season are unlikely to surprise anyone.