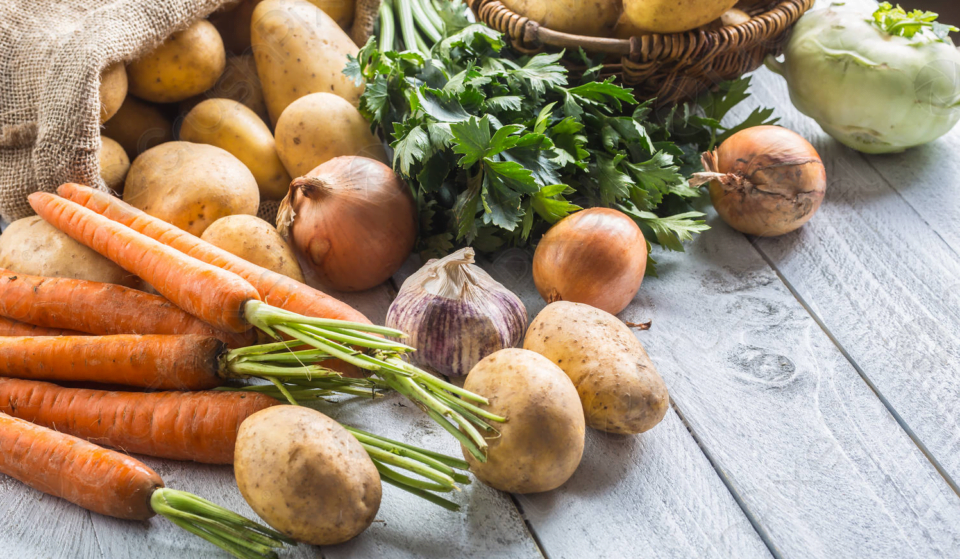 EastFruit continues to publish analytical materials on the potential impact on the Egyptian market of Russia’s economic problems and sanctions caused by its treacherous military invasion of Ukraine. You can read whether the demand for Egyptian potatoes will decrease and what will happen to the supply of Egyptian potatoes for export here.

By the way, we must add that the prospects for exports from Egypt are improving dramatically due to the recent sharp devaluation of the Egyptian currency. This means that the competitiveness of Egyptian fruits, vegetables, and potatoes in foreign markets will also increase.

In this article, we will assess the prospects for the exports of carrots, onions, and garlic from Egypt to Russia in 2023.

Carrots are not as a big export commodity for Egypt as potatoes – average carrot exports from Egypt over the past five years have ranged from 5 000 to 22 000 tonnes per season with a downward trend.

Unfortunately for Egypt, the main and only major market for fresh carrots from Egypt was Russia. Data for 2017-2021 indicates that about 80-90% of the total Egyptian carrot exports were supplied to the Russian market.

Given the high competition and the large volume of stocks of last year’s local carrots, in the event of an unfavorable situation in the Russian carrot market in the first and second quarters of 2023, Egyptian producers will have nowhere to sell or store products except for selling to processors, freezing, drying, or making juice.

Therefore, EastFruit analysts see serious risks for Egyptian carrot suppliers in the Russian market in the 2023 season. Excessive demand for carrots in Russia, as it was in 2021, is not yet expected.

Onions. Egypt was the largest supplier of onions to Russia from 2013 to 2020 inclusive. Meanwhile, Russia was not the largest onion sales market for Egypt, as opposed to the situation with carrots and potatoes, although it remained an important one.

However, the volume of Egyptian onion supplies to Russia decreased sharply in 2021 – by more than 2 times compared to 2020. The reason was the saturation of the Russian market with onions of local production at an affordable price and the absence of a traditional price peak, which usually started in Russia at the end of March. This is clearly seen in the graph below. 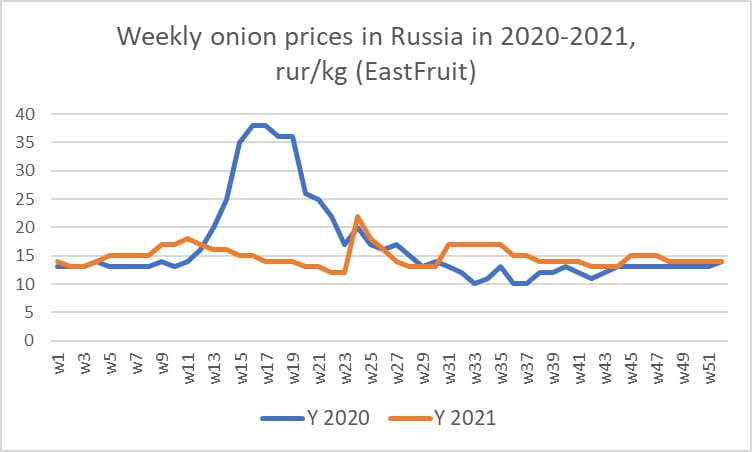 The situation was not favorable in many other markets either. The result was an oversupply of onions in the Egyptian market, prices fell, and farmers had to ship large volumes of onions for drying. By the way, Egypt sharply increased the export of dried onions in 2021 (by 26% in physical terms) compared to 2020.

Despite the peak of exports in 2019, there is still a tendency to reduce the total export of fresh onions from Egypt in recent years, as can be seen in the graph below. 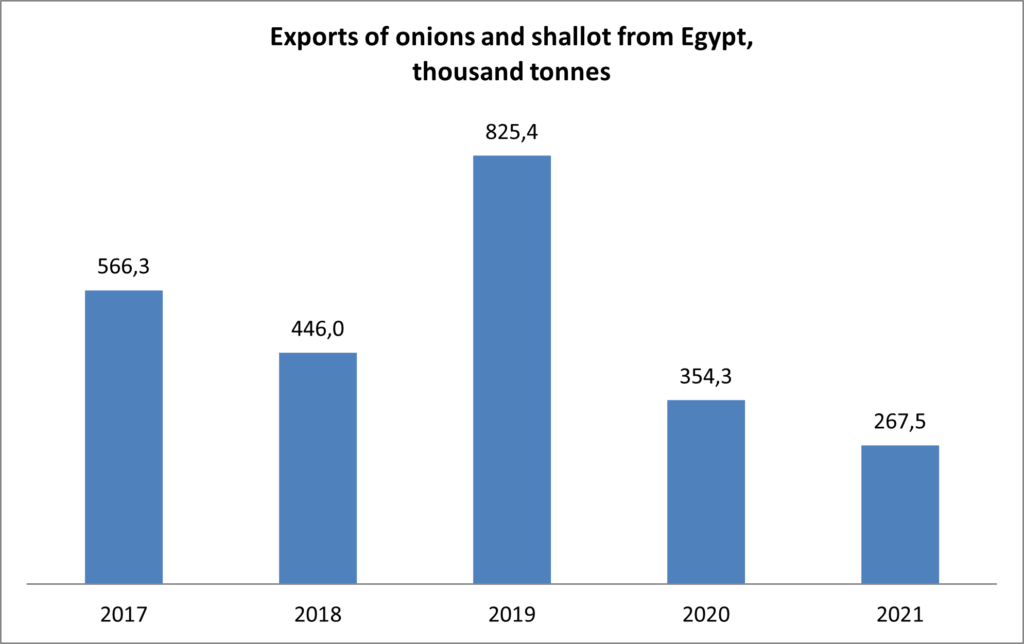 According to EastFruit experts, the demand for onions on the Russian market will remain at a fairly good level in 2023, at least not lower than in pre-war 2021. At the same time, there has been an increase in prices for onions after the New Year holidays in Russia.

Besides, Russia is not the main market for Egypt. The share of supplies to the Russian market in the total volume of Egyptian onion exports since 2018 is no more than 15% (from 7% to 14.4% in 2018-2021). There are more reliable, solvent, and stable buyers than Russia among the largest importers of Egyptian onions, such as Saudi Arabia, Great Britain, the Netherlands, Italy, and Germany. The total share of these five in 2021 accounted for more than 70% of onion supplies from Egypt. The number of countries importing more than 1 000 tonnes of Egyptian onions reached 18 in 2021.

Garlic is a very important vegetable exported from Egypt to Russia. Egypt, along with Iran, is the second largest supplier of garlic to Russia, after China. Egyptian garlic is supplied to Russia in the first and second quarters of the year.

In the first quarter, the only major competitor of Egypt in the Russian market is China. The garlic harvest in the 2022 season in China was large, the quality was good, and the prices were lower than last year. But due to the sudden end of the lockdown and the subsequent rapid spread of COVID-19 in China, Chinese exporters experienced difficulties in exporting garlic at the end of December 2022. If these problems stay relevant in January and the following months, Egyptian garlic exporters will not have their main competitor in the Russian market, or its presence will be weak due to restrictions. The issue of wholesale garlic prices in the domestic market of Egypt remains open due to the expected reduction in garlic production by 50% this season, and this may limit sales in the Russian market.

If the issues of Chinese exporters are resolved soon, they may glut the Russian market with garlic in the first quarter, and their prices will be more competitive compared to Egyptian ones due to the expected reduction in garlic production in Egypt.

Uzbekistan and Iran also enter the Russian market with a new harvest of garlic in the second quarter of the year. Thus, Egyptian garlic exports to Russia will depend on the developments in the Russian market given the above factors and their combination, even if the demand for garlic in the first half of 2023 is the same there as last year or even higher.

Nevertheless, analysts do not expect a significant decrease in demand for garlic in the Russian market, at least not a large one.

A third part of the analysis of the impact on the supply of other vegetables will be published soon.