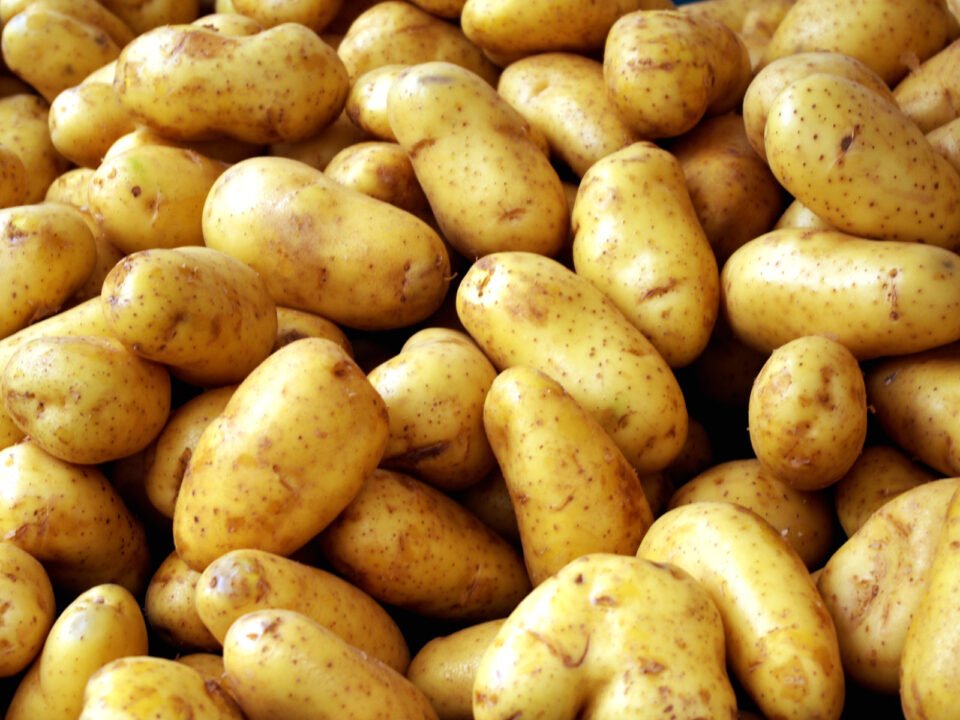 Home › Horticulture market › Studies › Potatoes of Egypt — how will the shrinking Russian economy affect the sector? Analytics by EastFruit (Part I)

According to various sources, the fall in Russia’s GDP due to its full-scale invasion of Ukraine in 2022 amounted to 3.4-4.5%. Many citizens of the aggressor country had to flee abroad, fearing mobilization into the army and/or political persecution for condemning the crimes of the Russian regime. Also, more than 100 000 Russian citizens have already died in Ukraine. This led to a drop in the incomes of the population, and to a decrease in the Russian population itself.

99% of Russian imports of Egyptian vegetables consist of 10 vegetables, and their structure at the end of 2021 (before the start of the full-scale war) was the following: 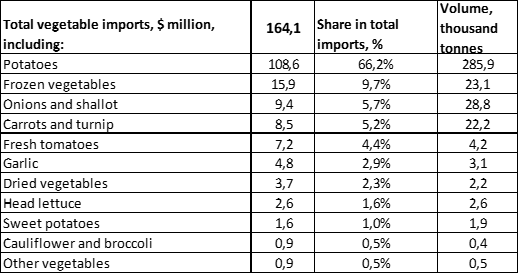 As EastFruit experts have already noted, Russia remained the main market for potatoes exported from Egypt in the first three quarters of 2022. In addition, Egyptian exporters increased the supply of onions, carrots, and frozen vegetables there.

In other words, Russia was the largest potato market for Egypt, and its share in the total exports of Egyptian potatoes in 2022 remained high, since Egypt’s export earnings from potato exports to Russia in the 9 months of last year amounted to more than $138 million, with a volume of over 300 000 tonnes.

If we compare the total volume of annual potato exports from Egypt and the volume of exports to the Russian market in physical terms, we note an interesting fact. 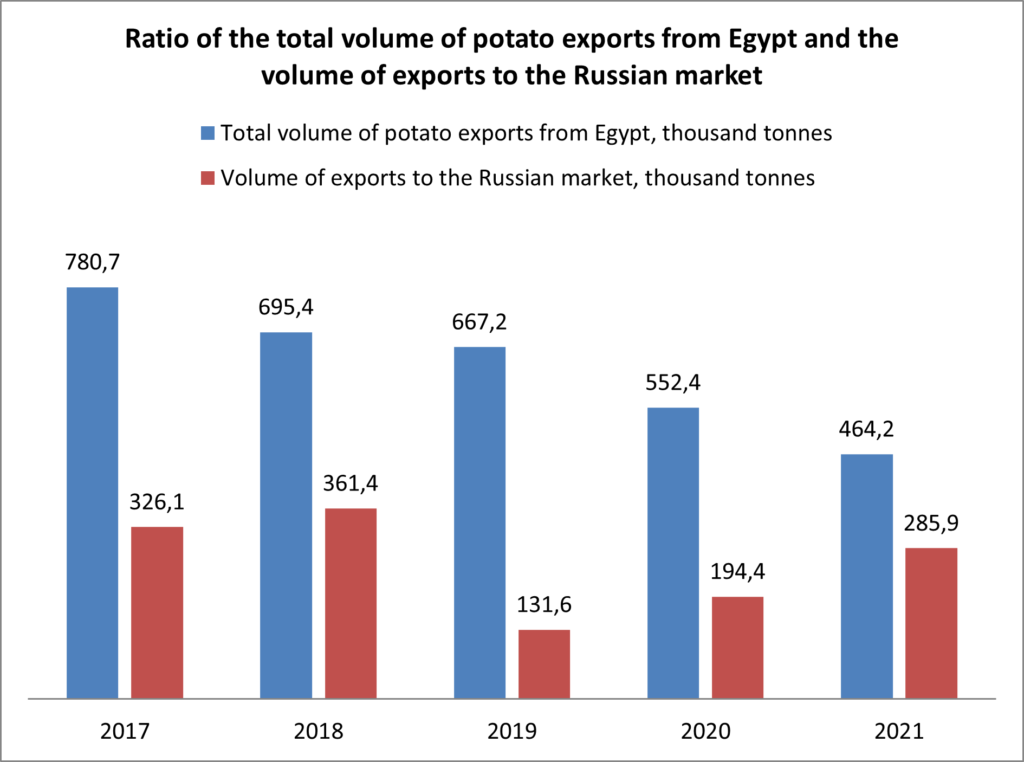 As you see from the diagram, Russia has become the main buyer of Egyptian potatoes over the past few years. It is not only due to the increase in potato purchases from Egypt but also because the total volume of potato exports from Egypt has been steadily declining from year to year.

What should Egyptian potato suppliers to the Russian market expect in 2023?

With the incomes of the population of Russia declining, the demand for basic food, or, in other words, for a source of cheap calories (which includes potatoes), is usually growing. The need to maintain a large military contingent on the territory of another state, as well as the maintenance of the population in the occupied territories dependent on Russian food supplies, should not be discounted.

Therefore, in our opinion, the demand for potatoes in Russia is likely to remain high – approximately at the level of 2022.

In addition to domestic demand, it is important to analyze changes in domestic production. The production of potatoes in Russia in 2023 depends on their domestic prices. So far, local farmers are dissatisfied with prices, which are 1.5 times lower than last year due to large stocks. This speaks of the low prospects for increasing the plantation area and production within the country. Therefore, it cannot be ruled out that the imports of Egyptian potatoes in the spring will be low. However, given the long-term downward trend in total potato exports from Egypt, Russia is likely to maintain its status as the main buyer of Egyptian potatoes.

As for the position of Egypt in the potato market of Russia, it is unconditionally the largest foreign player in this market. About 97-99% of the annual volume of potato exports to the Russian Federation is supplied by Egypt in the first and second quarters of the year.

The share of supplies in the first quarter accounts for about a third of the annual supply of potatoes. It was during this period that Egypt’s supplies were at least 3 times higher than those of other competitors in the Russian market. Egypt has only two major competitors in Russia at this time – Pakistan and Belarus. Given the flood in Pakistan in the summer of 2022, and the expected reduction in supply from Pakistani suppliers, Egypt has one large competitor in the Russian market in the first quarter of 2023 – Belarus. By the way, Belarus which is also under international sanctions for participating in the invasion of Ukraine has problems selling potatoes and similar problems in the economy as Russia does.

Egypt’s biggest competitor in the second quarter is Iran supplying potatoes to the Russian market both directly and, in part, through Azerbaijan. However, the volume of Egyptian potatoes in this period is twice higher as that of Iranian ones.

It should be noted that the Russian market is not the key one for the main and largest competitors of Egypt – Pakistan, and Iran. The main markets for Pakistani potatoes are geographically closer and rather large consumers, such as neighboring Afghanistan, Uzbekistan, the United Arab Emirates, and Sri Lanka. The main markets for Iran are neighboring Afghanistan, Azerbaijan, Turkmenistan, and Iraq.

Thus, according to EastFruit experts, Egypt will retain its leading position in the Russian potato market in 2023, and given the expected high demand for potatoes, there are no serious risks for Egyptian potato suppliers in this market.

Continued in the next article.