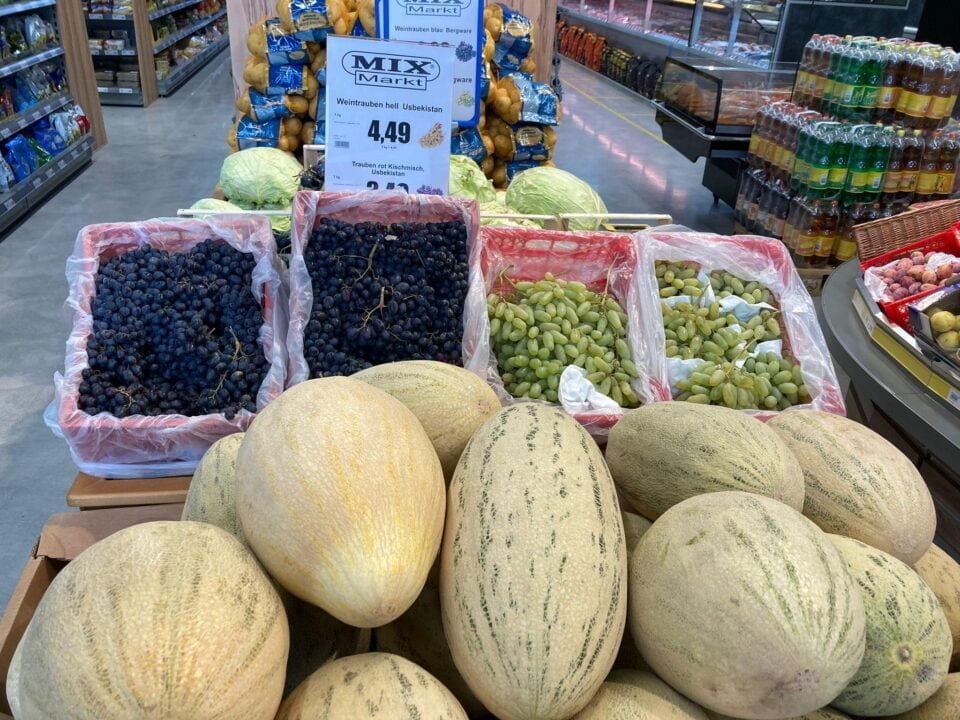 According to EastFruit analysts, there are more Uzbek fruits available this year in ethnic supermarkets in Germany targeting mainly immigrants from the former USSR and socialist bloc countries.

Obviously, the “Uzbek fruit” brand is still relevant for former Soviet consumers, because the fruits are sold well, despite their higher price than for those from the EU countries.

In particular, at the end of August, in the Mix Markt supermarket, Uzbek melons were sold at 1.29 euros per kg, which is equivalent to 16,200 sums per kg. At the moment, the wholesale price for melons in Uzbekistan, according to the EastFruit wholesale price monitoring, averages 1900 sums per kg or 15 euro cents per kg. However, about 40 eurocents is needed to deliver the melon to Germany, and another 20 cents per kg for packaging. Therefore, the cost of melons delivered to Germany, excluding the exporter’s markup, is now at least 75 eurocents per kg. Accordingly, the supermarket markup in this case is small, since the margins of the EU supermarkets are much higher than in Uzbekistan and the CIS countries due to higher labor and real estate costs.

Table grapes from Uzbekistan are also sold in German supermarkets. Despite the varieties not being indicated on the price tags, apparently, there are two most popular Uzbek varieties on sale: Khusayne white and Kishmish Kora Black. “Husayne White” is sold in Germany at 4.49 euros per kg (56,350 sums per kg). It is prized mainly for the shape of the fruit, but it has seeds. “Kishmish Kora” is a seedless variety, sold 1 euro cheaper – at 3.49 euros per kg (43,800 sums per kg).

Note that in 2020, Uzbekistan has already exported both melons and table grapes to Germany. 500 tons of melons and 17 tons of table grapes were exported during the season. Of course, the volumes are not large comparing to the total export volume of both goods from Uzbekistan. They are sold mainly in ethnic stores, because is difficult to compete with Spanish, Greek and Italian products in terms of price and quality in conventional supermarket chains in Germany.

However, even such volumes of melons and grapes exported annually to Germany is a breakthrough, since not only immigrants from the former USSR make purchases in ethnic stores, but also other residents of Germany, who get acquainted with Uzbek fruits and can appreciate their taste.