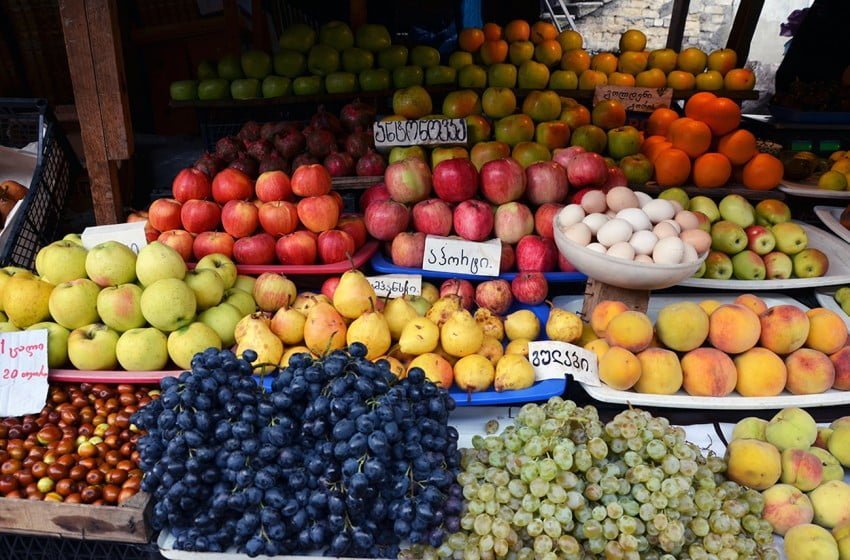 Home › News › Raspberries, walnuts and quince showed the most dynamic growth in production in Georgia over the past 3 years

Fruit production in Georgia is increasing. However, what fruits, berries, and nuts do Georgian gardeners prefer? To identify trends, EastFruit experts analyzed the change in perennial crop production in Georgia in 2019 compared to the 2016-2018 average based on data provided by the National Statistics Office of Georgia. However, there is a need to take into account both the frequency and weather factors that could affect production in 2019.

In 2019, compared to the 2016-2018 average, the total harvest of perennial crops in Georgia, according to official statistics, increased by 18%. However, the production of some goods decreased.

During the researched period, the most significant damage to the fruit and vegetable sector in Georgia was caused by the marble bug, due to which in 2015-2018, the harvest of some crops in the western part of the country was damaged. Our analysis showed that pest control yielded results, and key export products, particularly nuts and citrus, show the increasing growth by 14% and 1%, respectively. However, as of 2019, the production volumes of more than half of perennial crops in Georgia are less than 3 thousand tons, that is, production volumes remain insignificant.

Of the products with positive dynamics, grapes stand out the most, which, in addition to significant production volumes, also has a high production growth rate – more than 45%. However, it should be noted that the National Statistics Office of Georgia does not take into account production by varieties; thus, we assume that most of the grapes are technical varieties used in winemaking. Besides, the rate of planting table grapes, as well as the production, have also increased.

Raspberry production has the highest growth rates, and in 2019, compared with the average in previous years, raspberry production doubled. However, the base for comparison remains very low – in 2019, the production of raspberries was only 600 tons, comparable to the production volume of one large farm in Ukraine. Before the pandemic, a huge number of tourists visited Georgia, the demand for berries was high, and the price of raspberries never fell below $ 1.50 / kg. Therefore, many producers saw opportunities for themselves to grow this berry. Besides, with the support of state and donor programs, new varieties and growing technologies allow achieving high yields of raspberries per hectare with good transportability and taste of the berry.

Walnuts ranked second in terms of production growth rates in Georgia among fruit crops. Its harvest increased in 2019 in relation to the average indicators of 2016-2018 by 57% at once. As a result, in 2019, the export of walnut kernels from Georgia increased ten times at once, while imports fell sharply.

Although the volume of walnut exports is still low, namely only 321 tons in 2019, and considering that the country has been a net importer of walnuts for many years, this is indeed a turning point. According to the Georgian Association of Almond and Walnut Producers, at the end of 2019, the total area of ​​modern walnut orchards in Georgia exceeded 3,000 hectares, and many new orchards are already yielding crops. Therefore, the upward trend in production will only strengthen as the rest of the modern orchards begin to bear fruit in the next 2-3 years, and the already bearing ones will increase yields.

Besides, in 2019, FAO and EBRD organized a study trip to California for a group of Georgian nut producers to study the experience of growing walnuts, almonds, and pistachios. You can watch videos from walnut orchards that we filmed during this trip, as well as presentations by leading international experts during a specialized walnut conference in the Nuts playlist of our YouTube channel.

Also noteworthy is the dynamic growth of the production of kiwi and feijoa in Georgia. We recently shot a video about the prospects for growing feijoa, which has already become very popular and attracted the attention of importers from other countries of the region to Georgia. In Georgia, our video made it possible to draw producers’ attention to this interesting and promising culture. As for kiwi, EastFruit plans to share a video this year on growing, storing, processing, and marketing kiwi in Italy, which will also be of interest to producers in Georgia.

Overall, most perennial crops in Georgia are showing positive growth, with an average of 24%. The production volumes of most crops are still small, which creates opportunities for new professional producers.