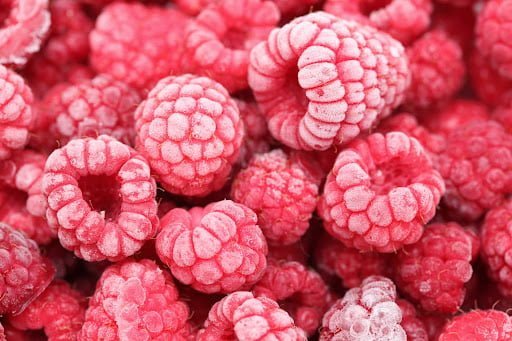 Home › Horticulture market › Market reviews › Poland is the global leader in the growth of frozen raspberry imports: an overview of key market trends

After the analysis of the competition among exporters in the global frozen raspberry market showing that Ukraine is a global leader in terms of its exports growth, EastFruit experts paid attention to imports. After all, it is the growth in demand, and hence in imports, that allows to increase the exports of raspberries.

Who are the main global importers of frozen raspberries, and what trends have been noted in these countries in recent years?

Every fifth kilogram of exported frozen raspberries in the world is supplied to Germany – 2.7 times more than France, second in this ranking. Note that the rating of importers was compiled on the basis of the average data over the past five years, but in 2020 the United States pushed France to second position in terms of imports of frozen raspberries. 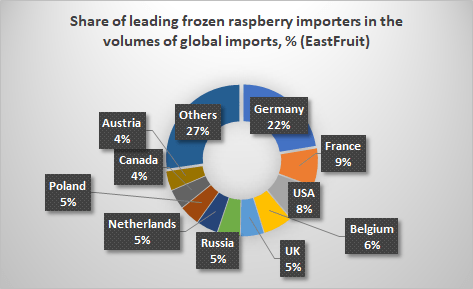 Accordingly, the United States ranks third in terms of imports of frozen raspberries in the world, being significantly ahead of other importers in terms of volumes.

As you see, the concentration of raspberry imports in the world is average, because the first three countries together import less than half, namely 39% of all raspberries.

Among the top 10 importers, there were also trading countries – those importing frozen raspberries mostly for further re-export. These are, first of all, Belgium, the Netherlands and Poland. Moreover, if the first two are net importers, due to extremely low volumes of domestic production with high volumes of consumption, Poland is a net exporter ranking second in the world by a large margin from the third in terms of net exports.

How many countries import exotic raspberries?

The second important aspect limiting the demand for frozen raspberries is the low knowledge level of the benefits of using frozen berries, fruits and vegetables.

“During our trade missions to ASEAN countries, primarily Malaysia and Singapore, we discovered that fresh raspberries are available in retail at about $40 per kg, and you can find raspberry smoothies on the menu in restaurants. Fresh raspberries are usually supplied to supermarkets from Chile or the United States, but there was almost no import of frozen raspberries. When we asked restaurateurs where they get raspberries for smoothies, they said they buy them in the supermarket, freeze and use for smoothies! They were extremely surprised when they learned that tastier frozen raspberries could be bought at $3-4 per kg – 10 times cheaper!”, – says Andriy Yarmak, economist at the Investment Centre of the Food and Agriculture Organization of the United Nations (FAO).

“Thus, there is a huge potential for the development of frozen raspberry global consumption, both by promoting the consumption of raspberries and frozen products in general. After all, most people in the world have never tasted raspberries. As a rule, consumers like this berry in smoothies, teas, juice, dairy such as yoghurts, in confectionery and bakery, and, of course, fresh,” the FAO expert explains.

Nevertheless, only 12-15 countries now import more than 10 thousand tons of raspberries annually, many of them for subsequent re-export. More than 1 thousand tons of raspberries a year are bought by only about 35 countries! This is both good and bad. It is bad because the market is limited. On the other hand, the potential for its growth is really great, but not at the high prices that prevail at the moment.

Where do consumers come from? Which countries are increasing imports of frozen raspberries faster than others?

We have mentioned that Poland is rapidly increasing imports of raspberries, but remains the second largest importer of this berry in the world. It will be interesting for Ukrainian exporters to know that many global leaders are increasing their imports.

For example, the average annual growth in frozen raspberry imports to Serbia that remains the undisputed leader in the global market is 12% or 1.4 thousand tons per year. Thus, Serbia is the 12th largest raspberry importer in the world! Chile is also rapidly increasing imports by as much as 20% annually.

Why would exporters import raspberries? What does this mean?

In our opinion, this suggests that marketing in any business is the key to success. Serbs, Poles, Chileans and other countries that sell a lot of raspberries for exports can use their own channels to resell raspberries from other countries – this is additional income! We wrote more about this in the article “How much money does Ukraine give to Poland when exporting berries?“. 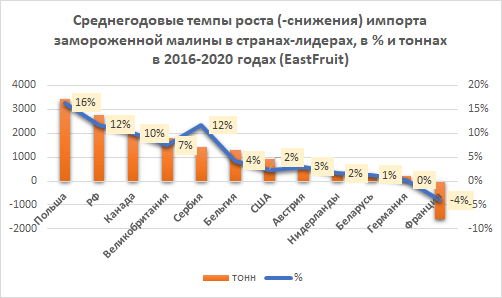 We took the top 11 largest importers of raspberries for the chart, since these are the countries that, on average, have imported more than 10 thousand over the past 5 years, excluding re-exports. We have already mentioned which country was a major re-exporter. It remains to add only Belarus that helped Russian importers bypass Russian “anti-sanctions”.

Notably, it was Poland that topped the list of countries with the fastest growing raspberry imports in the world. It imports 16% or 3.4 thousand tons of raspberries more every year. In this article, we analyzed the reasons for the decline in raspberry production in Poland and the increase in imports, one of which is competition from Ukraine.

Russia is second in the world in terms of growth rates of frozen raspberry imports. Obviously, this is due to the growth of production in the food industry of the country, where raspberries are used more and more. However, the berry business in Russia is extremely underdeveloped and local commercial production is severely limited, especially in the raspberry segment. Accordingly, the Russian Federation is forced to increase imports of raspberries from other countries. Moreover, it is Belarus that is one of the key exporters of raspberries to Poland, but Belarus itself has become one of the global leaders in imports.

The third and fourth positions in terms of the growth rate of frozen raspberry imports are taken by Canada and the United Kingdom. The first one annually imports 2 thousand tons more, and the second – 1.8 thousand tons more. Relative growth rates also remain high. This year, Ukraine has already supplied at least one batch of raspberries to Canada and the United States, so they may become more traditional markets for the suppliers of our region.

Also, good opportunities open up in the US market, which is quite capacious, with prices being almost always very attractive. Therefore, this market should become one of the strategic ones for any supplier of high-quality products.

As you see in the chart, France is the only country that has reduced raspberry imports over the past five years. However, this does not prevent it from remaining one of the three largest markets for frozen raspberries in the world. It is gratifying that Ukrainian exporters are already actively supplying raspberries there.

What trends are noted in the import of frozen raspberries in 2021?

Frozen raspberry prices skyrocketed in the summer of 2021. The sharp rise in global prices was triggered by the raspberry harvest failure in Serbia that became apparent when the harvest of summer varieties started. The demand remained high, but given such a high price level, it will undoubtedly decline.

Since prices were still relatively high in the first half of the year, many countries have already started to reduce imports in 2021. According to data for the first 7 months of 2021, more than half of the top 10 importing countries have reduced the volume of raspberry imports. This is a wake-up call, especially after the active expansion of areas planted with raspberries in Ukraine, Poland, Serbia, Bosnia and Herzegovina and in many other countries. We have already written about the “raspberry boom-2 in Ukraine” – similar is expected in other raspberry-producing countries.

According to our estimates, the total volume of global raspberry imports in the first 7 months of 2021 decreased by about 5%. The top 10 global importers have reduced imports by 11 thousand tons over this period! The reduction in this group of importers may reach 25-30 thousand tons by the end of the year.

Therefore, all producers and processors of raspberries need to take into account the reducing import volumes and replacing raspberries in recipes with other fruits and berries. After all, the high price of berries makes them less attractive for the food industry of importing countries.

The strategy for the sustainable development of the raspberry business, as well as how Ukraine can become a global leader in the raspberry export in volume and in value, will be discussed in Kyiv on December 3, 2021 at the 17th international conference  “Fruits and Vegetables Ukraine 2021. New Investment Opportunities” within the framework of the #FTradeClub. You can apply for registration here. The event is supported by the Ukrainian Horticultural Association, the European Bank for Reconstruction and Development (EBRD) and FAO.