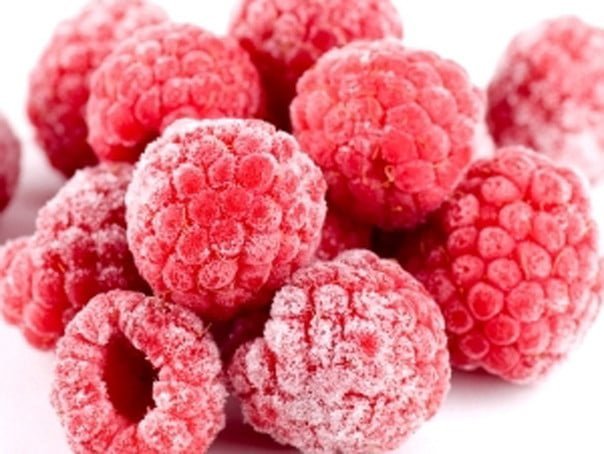 Given the growing interest in raspberry production, especially in Ukraine, which may result in a new “raspberry boom” with negative consequences for many producers, EastFruit experts analyzed the trends in global exports of frozen raspberries.

Who is Ukraine’s main competitor in the global raspberry market? Who is the fastest to increase raspberry exports? Which countries are net exporters and which ones prefer re-export? What is happening with the production of raspberries in Poland? We will answer these and other questions in this article and support them with figures and facts.

Competitors of Ukraine in the global frozen raspberry market

If we ignore the re-exporting countries, the leaders of the global frozen raspberry market and the main competitors of Ukraine are Serbia, Poland, Chile, Bosnia and Herzegovina, Mexico and China. Given the geographic realities and the structure of exports, Chile, Mexico and China can be partially excluded from this list. However, given the start of supplies of Ukrainian raspberries to the USA and Canada, these countries are also becoming direct competitors of Ukrainian raspberry exporters. In addition, they are supplying more and more frozen raspberries to the EU countries, and China – to Russia.

Over the past five years, the share of these countries in global exports of frozen raspberries was as follows. 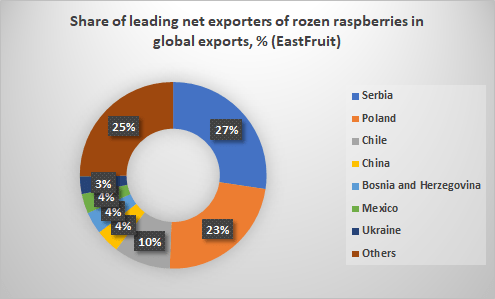 As can be seen, Ukraine closes the seven global leaders in terms of export volumes with a share of about 3% of global exports.

However, if the countries are sorted by the volume of net exports, Ukraine becomes fifth for a five-year period and fourth, if exports in 2020 are taken into account. Only Serbia, Poland and Chile remain ahead of Ukraine, although the gap between them and Ukraine remains huge. The net volume of exports of frozen raspberries and blackberries to Serbia is 132 thousand tons in 2020, and Ukraine’s – just under 21 thousand tons. It turns out that in recent years Ukraine has overtaken Bosnia and Herzegovina, Mexico and China in terms of frozen raspberry exports.

By the way, there are also Germany that exports more raspberries than Ukraine, Belgium, the Netherlands and Belarus in the global ranking of large exporters of frozen raspberries. However, all of them are net importers, that is, they import more raspberries than they export. Accordingly, they can be both sales markets and competitors for Ukraine.

What is going on with raspberry production in Poland and how does Ukraine affect it?

Poland is the closest neighbor of Ukraine, the main competitor, and, of course, the largest market for Ukrainian frozen raspberries. Also, tens of thousands of seasonal workers from Ukraine leave for Poland to harvest raspberries and other berries. Naturally, both countries compete not only in the frozen raspberry market, but also in the labor market. Who wins this competition?

Let’s first take a look at the trends in Poland. 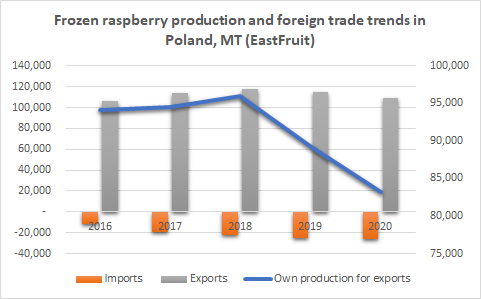 It is interesting that Ukraine is increasing its net exports of frozen raspberries by 2.5 thousand tons on average annually over the past five years. It means it is Ukraine that greatly helps Poland to keep its export volumes at a high level, supplying its raspberries to Poland for re-export at a high price. If Ukrainian processors and exporters learn to more effectively sell raspberries directly, bypassing Poland, this will only accelerate the reduction in raspberry production in this country.

It is the development of direct exports of frozen raspberries that will allow Ukraine to compete more successfully with Poland in the labor market, because producers will receive higher prices, thus, they will be able to pay workers no less than they pay in Poland. Of course, it is not that simple – in order to pay a competitive price, you need to fulfill a number of conditions. For example, to increase the yield and quality of raspberries, as well as to collect volumes for exports.

More on how Ukraine can successfully compete in the market of raspberries and other berries, as well as the new successful UHA export platform, will be discussed during the 17th international conference “Fruits and Vegetables of Ukraine 2021: New Investment opportunities” to be held on December 3, 2021 in Kyiv. Registration of participants is open here.

Global leaders in increasing the rate of exports of frozen raspberries

According to EastFruit estimates, Ukraine has been the global leader in the relative growth rate of raspberry exports among the top 10 net exporters for the past five years and ranks second in the world in terms of the absolute growth rate of net exports. Ukraine increases the export of frozen raspberries by 17% or 2.5 thousand tons annually. We note that we used only net export rates for the analysis.

As you see can see from the above chart, only Serbia increases the exports of raspberries faster than Ukraine in absolute terms – by 8.5 thousand tons of raspberries of its own production annually. Therefore, the gap between Serbia and Ukraine in global exports continues to grow.

The good news for Ukraine is that Ukraine is successfully closing the gap with other countries in terms of export volumes, in particular with Poland and Chile, and is breaking away from Bosnia and Herzegovina, China and Mexico. Notably, Poland and Chile have been cutting net exports of frozen raspberries in recent years, giving way to competitors.

The sharp rise in global prices for frozen raspberries in 2021 caught all market participants by surprise. This was a kind of compensation for the tenacity of those farmers who did not go out of business in 2017-2018, when prices fell to incredibly low levels. We wrote about the reasons and consequences of the rise in prices in the article “Raspberry Boom 2”.

What happened to exports in 2021? How did the leaders’ positions change?

More or less reliable data is available for most of the leading countries in the exports of frozen raspberries until July 2021 inclusive. And here’s the picture.

Serbia reduced the exports of frozen raspberries in the first 7 months of 2021 by 17% compared to 2020. The exports of Serbian raspberries will also be lower in the second half of the year, because it is the decline in the raspberry harvest in Serbia that has become one of the reasons for the global rise in raspberry prices.

Poland, on the contrary, managed to increase the volume of exports of frozen raspberries by 14%, although it could not compensate for the decline in Serbia’s exports. Poland also exported much less raspberries than in the same period in 2019.

Mexico doubled its exports of frozen raspberries in January-July in two years. Compared to 2020, exports grew by 36% – the fastest growth among all competitors.

Ukraine increased the exports of frozen raspberries by 32%, or about 2.5 thousand tons during the specified period. This means that the growth of exports can significantly accelerate by the end of 2021, as raspberries of new harvest had a minimum specific weight in the export data for July. We know that the 2021 raspberry harvest was high in Ukraine and exports in the remaining months of the year are very active.

China’s exports of frozen raspberries increased by 25% during the stated period. However, we do not yet have reliable information about raspberry market developments in China.