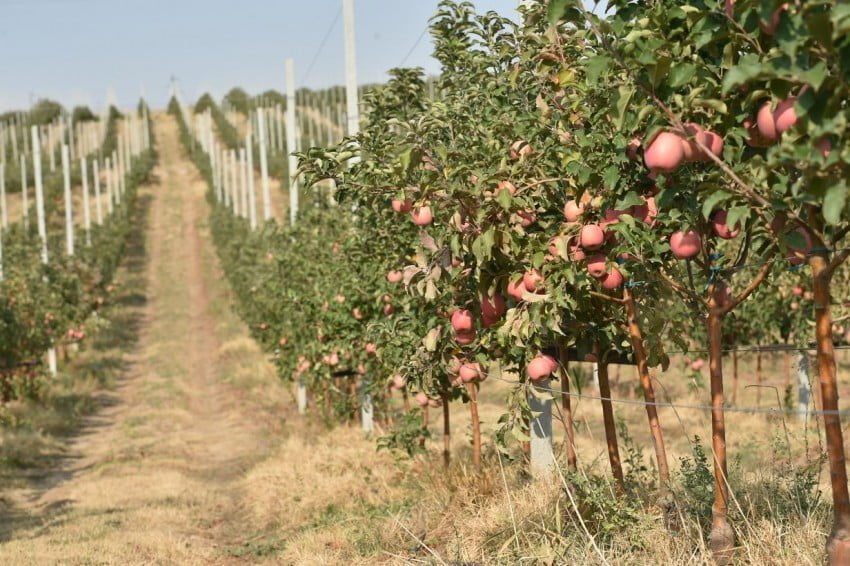 In Tajikistan, threats loom for the future of many intensive apple orchards. These orchards, which were established using modern cultivation technologies, may be uprooted as early as next year.

EastFruit experts have tried to understand the reasons for this threat. To do this, our colleague from Tajikistan Bakhtiyor Abduvohidov, consultant to the Food and Agriculture Organization of the United Nations (FAO), talked with farmers and consulting agronomists with experience in the country regarding their current views and suggestions to remedy the situation.

The farmers we interviewed had approximately 35 hectares of fruit-bearing apple orchards planted on average about 4.3 years ago. Most grew orchards on M-9 dwarf rootstocks, but also some were semi-dwarf MM-106.

As a rule, farmers consulted with sellers of seedlings when cultivating these orchards. Those sellers promised that, depending on technology, they would be able to produce roughly 35-40 tons of high-quality apples per hectare by the fourth year; and, upon reaching full fruiting, about 60 -70 tons per hectare.

Unfortunately, the farmers we interviewed only averaged 7 tons per hectare of apples this year while taking into account non-commercial products sent for processing. That is, the yield turned out to be 5-6 times lower than expectations, which now leaves many farmers considering the uprooting of intensive apple orchards to cultivate other orchards and vineyards more familiar in Tajikistan instead.

Tuigunov Boymurod, a farmer who owns an intensive apple orchard and advises other apple growers, sees three main reasons for the problems. “The problems in Tajikistan are primarily the weather,” says Boimurod. 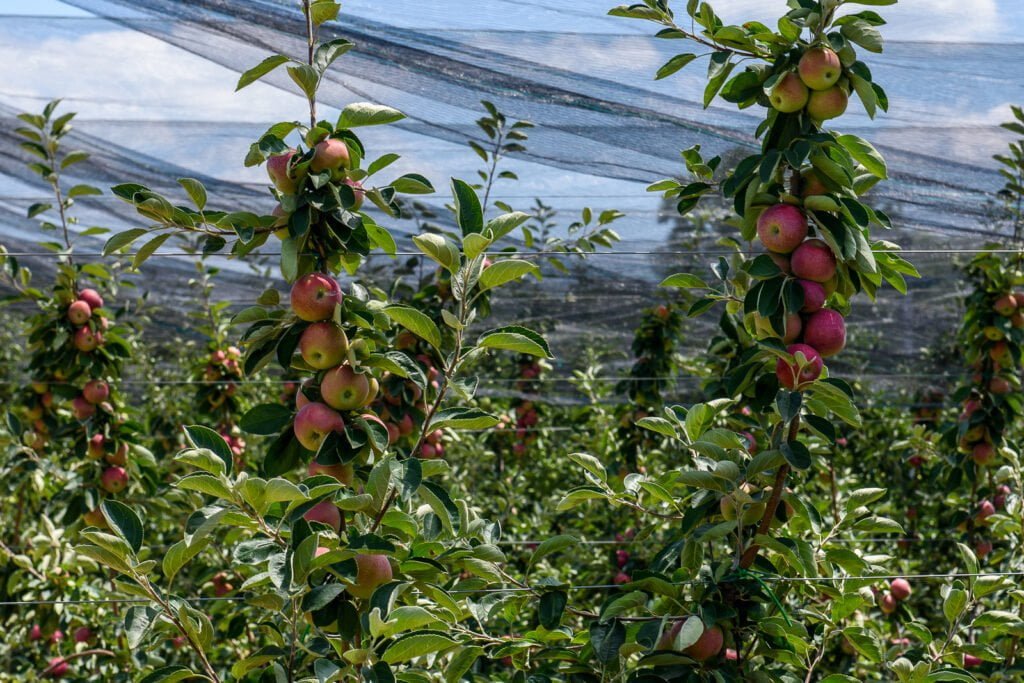 “In the future, those who constantly have problems with frost and hail will leave, especially those who grow apples in regions that are not traditional for apple orchards. Where apples have always grown, the areas will expand. In all regions of Tajikistan, hail is the main threat to apple orchards. The second problem is the poor qualifications of those who give advice on the use and quality of plant protection products. Finding and using them correctly is a specific problem for us. The third problem is the lack of farm equipment. When you have to cut grass you either have no people to do it or no money to hire people to do it. If there had been equipment, it would have been done easily. Also, equipment makes it is possible to spray faster and better, but not everyone does it. Those who do not protect their orchards at all, will receive nothing. Farmers do not always have time for their orchards. If household chores arise, they solve problems at home first, then problems in the orchards. That is why the result is bad and they see what (high) prices are in Dushanbe, but they have already missed the opportunity,” explains Mr. Tuigunov.

Farmer Nosir Boboev from Penjikent in the Zeravshan Valley planted an intensive apple orchard on two hectares in 2016 and acquired seedlings in Serbia. He is trying to grow Golden Delicious, Granny Smith, and Idared apple varieties; but he is already considering getting rid of the business that so far brings only losses.

This year the farmer managed to collect only 6 tons of apples – only 4 tons are high quality. He believes worms are to blame. “Because of them, a lot of apples fell from the trees. Last year, we also received only 4 tons of apples from two hectares despite the fact that the orchard is on drip irrigation – we give fertilizers through drop, on leaf, and at the root. Proceeds from the sale of the crop do not even cover the cost of fertilizers and protective products, which are very expensive. I will do it differently next year. If it doesn’t work out, I’ll replace the orchard. It’s good that I have another business,” says Nosir Boboev.

“For many years now, we have had an unstable harvest in the valley – now worms, now bad weather, and now hail. The people who grow apples do it the old-fashioned way. They do not work in apple orchards at all; they come to their orchards a couple of times a year, always during the harvest period…If God wills it so, they take it; and, if not, then they don’t, because the costs are minimal. There are many pests here and people are not ready to spend the money to fight them. There is a lot of hail and rain in our region during flowering – you need to use a net, but you won’t make money on it,” explains the farmer.

Nina Dmitrash, FAO’s international consultant on horticultural technologies, who has visited Tajik orchards and regularly communicates with farmers in the country, helps them to understand various technological problems. She believes that farmers cannot just take a new technology and implement it without first making adjustments for their orchard’s needs. It must be adapted to the conditions of the growing region taking into account both climatic conditions and soil specifics. “In Tajikistan, unfortunately, there is still not enough knowledge and understanding of the technological methods of intensive gardening for growing apples. People often write to me from Tajikistan and ask for advice. For example, they ask why the fruits of the Gala variety cracked and the process of decay began. I ask if this orchard was provided with moisture, was calcium introduced, did they carry out treatments against storage diseases, and did they start harvesting on time? Their answers: ‘Why water if we are already planning to pick an apple? Why process if we do not plan or have the ability to store?’ Also, maturity is determined by color and taste, that is, by eye,” Nina gives as an example.

There is a shortage of basic knowledge about intensive gardening technologies, which when used properly result in a high apple yield with high quality parameters.

“This year, there were frosts in early spring. The fruits did not set well; the yield was not high. Most of the flowers fell off. Flowering was massive, but there was no ovary. From an area of ​​4.5 hectares, we received about 15 tons – this is nothing. We had problems with the shape of trees so in the winter they did deep pruning, maybe this also influenced the poor outcome. Unfortunately, in Tajikistan, we have problems with specialists and poor agricultural technology,” says one of the pioneers of intensive apple orchard farming in the country, Nasrullo Sayfulaev, representing the dekhkan farm SEROB. Nasrullo has high hopes for the next season and has not yet given up the orchard because he sees good fruit buds this year.

Read also: Why, in the current season, Tajikistan winegrowers could not get a high harvest?

Abdusator Khaidarov, head of the Nexigol group of companies, owns a network of agricultural stores in the country and imports plant protection products from Europe. In addition, he has 2 hectares of intensive apple orchards, in which he grows more than 15 varieties based on M-106 and M-9. He uses them to demonstrate modern technologies, but Abdusator stopped using drip irrigation of the orchard.

“Drip irrigation was done in the first three years, then I switched to irrigation ditches when the seedlings took root. At that stage it became more profitable, because after three years it was necessary to change the system. Then, they decided to leave it on the irrigation ditch. Now it makes no sense, in our opinion,” says Mr. Khaidarov. 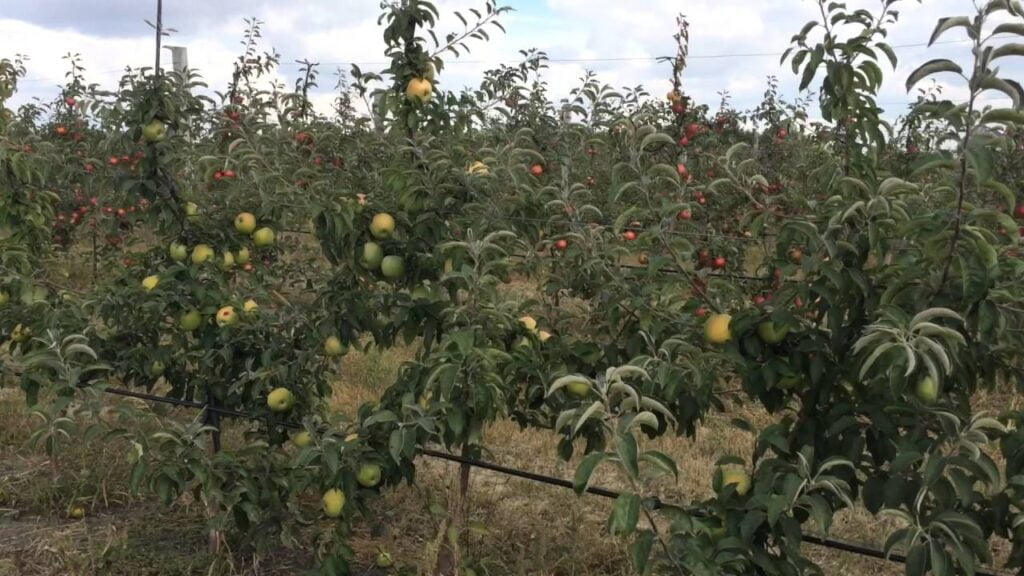 Since the entrepreneur communicates with many farmers, he has his own understanding about the problems of growing apples in Tajikistan.

“Problem number 1 is implementation and lack of storage. Farmers are forced to hand over an apple from 1.5 to 4 somoni per kg, and those who buy an apple earn much more than a farmer by storing it. Growing apples becomes boring.”

The farmers we interviewed said that they sell apples at an average of 6.2 somoni per kg (about 60 US cents per kg), which is a very high price. These prices are not even in most other countries in the region. Even for non-marketable apples, according to the interviewed farmers, you can get up to 3 somoni per kg (29 US cents). However, in countries like Ukraine, Moldova, and Poland, such apples can rarely be sold for more than 5-10 cents per kg.

In addition to problems with sales, Abdusator Khaidarov also sees a lack of technological knowledge and a lack of farm equipment among the main problems.

According to Andriy Yarmak, an economist at the Investment Centre for the Food and Agriculture Organisation of the United Nations, who has been working with the fruit and vegetable sector in Tajikistan for more than five years, it is the lack of basic education and a sufficient level of understanding the logic in using intensive technologies that is one of the main problems of the industry. “Poland introduced intensive orchards after millions of citizens from the country went to work in the orchards of Germany, Italy, the Netherlands, and other EU countries, receiving, in addition to money, knowledge and understanding of modern approaches to farming. At the same time, basic education tried to keep up with modern requirements – students and teachers of agricultural universities had practical training at modern enterprises and tried to introduce this into the educational process. Even so, not everything worked out right away – there were mistakes and disappointments in Poland, too,” says Andriy Yarmak.

“Tajik farmers should not hope for instant results. After all, intensive farming is hard work every day. However, there is a lot to learn. There are many options for how you can gain practical experience. For example, you can arrange for your employees or relatives to work in horticultural enterprises in Moldova or Ukraine where there will be no big problems with the language barrier. It is also possible to organize intensive hands-on training for relatively little money in these countries. It is even easier to go to Uzbekistan, where there are already a number of relatively successful apple producers, and get practical experience there. Even more can be learned from Iran, where farming is developing rapidly,” recommends Andriy Yarmak.

He also believes that it would be nice if all growers came together in an association that could centralise the accumulation of knowledge and experience in intensive farming. “The association would accelerate the transformation of the horticultural business as well as become a marketing center for joining the efforts of manufacturers to sell finished products and even to purchase quality material and technical resources, equipment, and other elements of horticultural technologies,” says the FAO economist.

Moldova increased apple exports in the first half of April