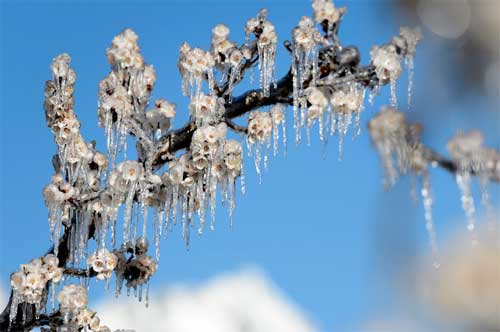 Instead of waiting for the announcement of official data on the damage from the February frosts to orchards and vineyards in Uzbekistan, EastFruit experts conducted a selective survey of farmers with many years of experience from different regions of the country. Particular attention was paid to the Fergana Valley because the Bukhara and Samarkand regions share two-thirds of the total production of fruits and berries for the entire country.

According to EastFruit analysts, the cultivation and sale of stone fruit crops bring the residents of Uzbekistan more than $500 million in revenue and more than $250 million in foreign exchange earnings for the country. Therefore, this industry is critical for the well-being of rural residents and the country’s economy as a whole.

Islomzhon Mamatov, a farmer from the Altyaryk district of the Fergana region, believes that subzero temperatures at the end of last month had almost no effect on the future harvest of grapes, apricots, and cherries. If there are losses, they are expected within the range of annual average statistical fluctuations.

Azizbek Khamraliev, a farmer from Kuvasay in the Fergana region who specializes in the production of grapes, peaches and cherries, said the yield losses from the February frosts are 2-3%. As for apricots, he estimates the damage from 5% to 10%. Farmers of the Andijan region estimate the maximum losses from these frosts up to 10%.

In the southernmost region of Uzbekistan in the Surkhandarya region, they also hope for minimal losses despite the fact that almonds, apricots, and cherries had already blossomed there by the time the cold weather began. Due to the fact that the de facto cold weather turned out to be much milder than predicted and the air temperature did not drop below zero, the surveyed farmers do not see a serious negative impact of the temperature fluctuations on the future harvest of stone fruits and almonds.

The situation is completely different in the middle zone of the country. Ashur Oripov, an experienced farmer from the Bukhara region (Shafirkan district), said that by the time of frost in late February early varieties of apricots had blossomed, which is about 25-30% of all apricot trees in his orchard. He estimates the future yield losses of these early varieties to be 80-90% with frosts destroying the overwhelming majority of the crop of blossoming apricot varieties.

Fakhriddin Davronov, a farmer who runs one of the largest horticultural farms in the Samarkand region (Akdarya district), estimates the losses on early blossoming apricot varieties to be 95%. Despite the fact that cherries and peaches had not yet blossomed by the time of the frost, in his opinion, the damage to the future harvest could be up to 50% of the potential harvest. As for apples and cherries, he thinks there are practically no losses.

Interviews with farmers from the Payaryk district of the Samarkand region also believe that the vast majority of the harvest of blossoming apricot varieties is likely to be lost.

Farmers of the Republic did not have time to fully assess the damage from the frosts at the end of February, as nature again prepares a new test for the future harvest of fruits and grapes. By the end of this week and early next week, another cold snap is expected in Uzbekistan, which will be further aggravated by strong winds.

It is predicted that from Sunday to Tuesday, the air temperature at night in the Fergana Valley will drop below zero to minus two degrees Celsius. In Tashkent and the central regions of Uzbekistan, it is expected up to minus six at wind speeds of up to 12-15 meters per second.

The weather forecast for Bukhara is even more threatening at minus 5 degrees at night with wind speeds reaching 18-19 meters per second.

The worst tests await the residents of Samarkand where, according to preliminary forecasts, the temperature at night may drop to minus 10, which, even without wind, would threaten the loss of the crop. With strong winds, the actual temperature can become significantly lower.

In Surkhandarya, the southernmost region of Uzbekistan, the air temperature will barely drop below zero, but the winds will be the strongest up to 30 meters per second. This can destroy a significant part of the ovary even without frost.

It remains to be hoped as in the previous time, that the reality will be more lenient compared to the weather forecast.

EastFruit will closely follow the development of events and promptly inform about the impact of such sudden changes in air temperatures on the harvest of the current year.

Today, the largest online conference about apricots in the region is being held. Although the conference is called “Apricot Business in Tajikistan,” 95% of all the issues discussed will be relevant for Uzbekistan and other countries of Central Asia.