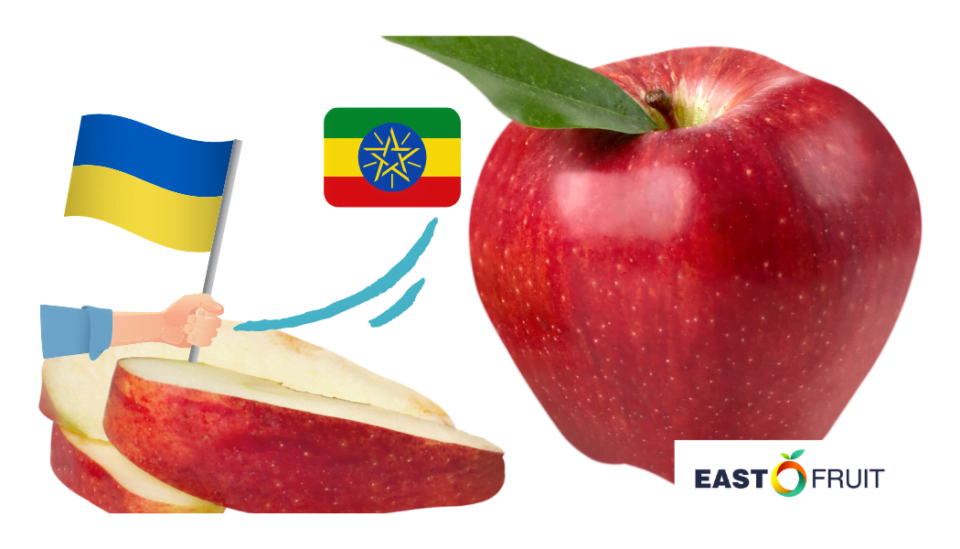 According to EastFruit analysts, Ethiopia continued to increase apple imports at the end of 2021. The import volumes of these exotic for Ethiopia fruits increased by 30% in 2021 and reached 4.3 thousand tonnes.

Naturally, the leader in terms of apple supplies to the Ethiopian market is South Africa, which is closer than other suppliers. Imports from South Africa grew by 88% over the year and accounted for almost a third of Ethiopia’s total apple imports.

However, the sharpest increase of apple exports to the Ethiopian market in 2021 was demonstrated by Ukraine, which is now among the six largest countries-suppliers. The exports of fresh apples from Ukraine to Ethiopia grew more than 6-fold over the year and reached 222 tonnes. Ukraine has also bypassed such large apple exporters as Poland, Italy, China, the USA and Serbia In terms of the volumes of apples shipped to Ethiopia in 2021.

Read also: Apples at $1 apiece – how to successfully sell apples to Sub-Saharan Africa?

Notably, Ukraine almost caught up with Chile in terms of apple exports to Ethiopia in 2021. Five countries, South Africa, France, New Zealand, Turkey, and Chile, are ahead of Ukraine in their apple exports to Ethiopia. Exports from France and New Zealand tend to decrease recently, while Turkey is increasing them rather quickly. In 2021, apple imports by Ethiopia from Turkey grew 3.6 times and Turkey became the second in terms of growth in supplies to Ethiopia after Ukraine.

“In apple exports to the countries of Sub-Saharan Africa, it is not so much the volumes that are important as the trend itself. After all, apples are mainly sold by piece there and they are still quite expensive. This means that, subject to a decrease in prices and an improvement in the trade infrastructure for fresh produce, which is still sold without refrigeration, the potential for growth in apple exports is huge. Indeed, more than 115 million people live in Ethiopia, and the rate of population growth, combined with the rate of economic growth, is higher there than in the vast majority of other regions of the world, including the Southeast Asia,” says Andriy Yarmak, economist at the Investment Centre of the Food and Agriculture Organization of the United Nations (FAO).

Apples from Ukraine, as we already wrote, are becoming a trend in the region of Sub-Saharan Africa. This means that we can expect the share of the countries of this region to keep growing in the apples exports from Ukraine.

Reduction in supply makes prices for onions increase in Ukraine