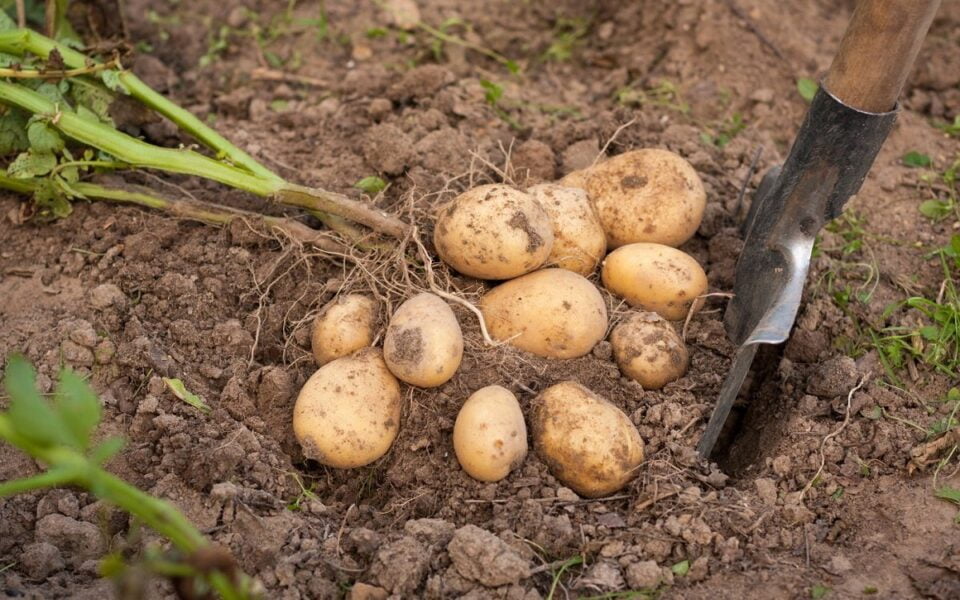 In Georgia, potato prices hit historic lows, stocks at are record levels, and imports are increasing

The Georgian team of EastFruit analysts draws attention to the unusual situation in the Georgian potato market this season. The first lots of early potatoes from greenhouses have already appeared on the market, prices for2020’s harvest potatoes are significantly lower than those of last year and the stocks are still unusually high, with imports that are still higher than last year! Nevertheless, it does not seem that Georgian potato producers are planning to reduce the area cultivated with tubers. Let’s figure out what are the reasons for this!

First of all, we note that the 2020/21 season will definitely be less profitable for potato farmers in Georgia. Moreover, in our opinion, not everyone will be able to sell the entire potatos stocks of the 2020 harvest, because potato imports remain high. 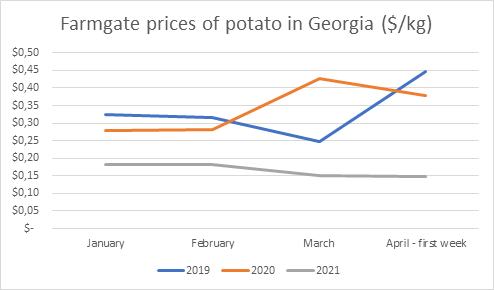 Monitoring of wholesale prices by East-Fruit shows that in the first quarter of 2021, prices decreased by an average of 49% in USD and by 37% in lari compared to the same period in 2020. Such a significant difference between March 2020 and March 2021 prices is mainly due to the fact that in 2020, during this period, the first wave of the coronavirus pandemic began and consumers started panic-buying food. However, the current prices are also lower compared to 2019.

Farmers associate the low price of potatoes in the first quarter of 2021 with a high harvest in 2020 and a decrease in demand due to the lack of tourists and the shutdown of the HORECA sector. The rich harvest was due to favorable climatic conditions, as well as an increase in the area cultivated with potatoes in 2020. This is indirectly confirmed by a significant increase in imports of seed potatoes. 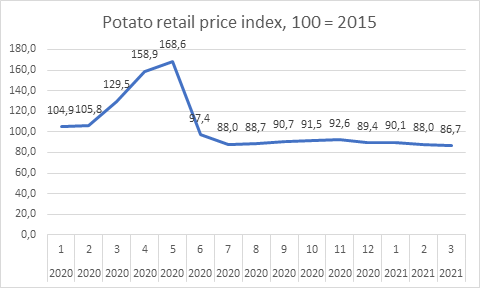 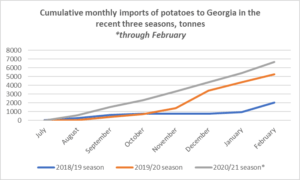 Despite 2020 being a good year for potatoes in  Georgia, imports of potatoes were 27% higher as of the end of February 2021 than in the previous season. Moreover, despite the downward trend in prices for potatoes in Georgia, imports increased every month. As can be  seen in the table, the volume of potato imports at the end of February was at record levels over the past three seasons. The main, and the only supplier of potatoes to Georgia during this period was Turkey, where prices for tubers were even lower.

Potato imports will most likely still be lower at the end of the 2020/21 season than in the previous season, because more than 9 thousand tons of potatoes were imported to Georgia in March-May 2020. This was the market’s reaction to the surge in demand, which, in turn, was caused by the panic during the first lockdown, the closure of agricultural markets and low local stocks.

Seed potatoes were imported mainly from Germany and the Netherlands both this and last season. However, Turkey has also increased its export of seed potatoes to Georgia.

Despite the difficult year, in a conversation with EastFruit, farmers note that they will continue to grow potatoes in the same volumes, and are not going to reduce production in 2021. Perhaps they have sufficient stocks of seed potatoes of their own production. However, considering dynamics of prices for  potatoes and a decrease in imports of seed potatoes to Georgia, most likely, the area planted with potatoes may still decrease.

The new potato season in Georgia will start in June. Traditionally, farmers from the southern region of Kvemo Kartli will be the first to harvest early open field potatoes. In September, late potatoes from Samtskhe-Javakheti will arrive  on the market, where there are appropriate climatic conditions for growing late potatoes, which ensures consumption in winter and spring.

Although Georgia has not started harvesting potatoes in the open field yet, greenhouse potatoes are already present on the market. According to the results of price monitoring last week, early potatoes cost 4–5 lari ($1.17 -1.47). Last year at this time, there were no commercial lots of early potatoes on the market yet.