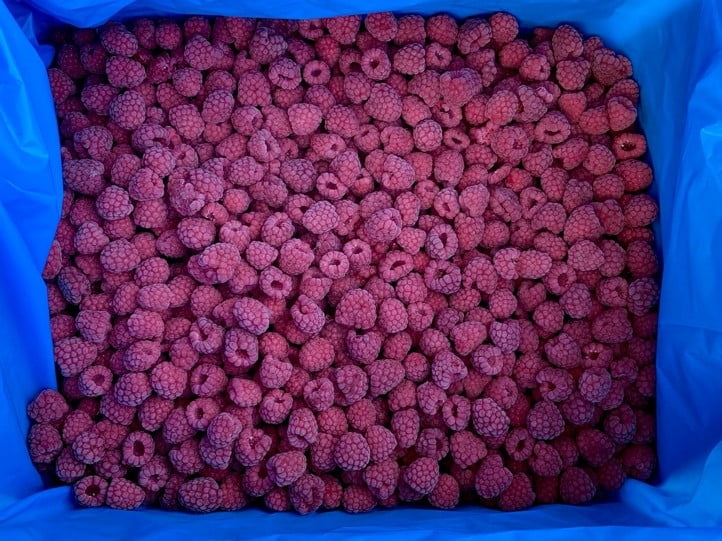 Home › News › Frozen raspberry market in the EU – when will the free fall in prices stop?

EastFruit team is starting a series of market reports on frozen berries, fruits and vegetables. The first analytical report will be devoted to raspberries – the key product that gave impetus to the development of shock freezing industry in Eastern Europe and Central Asia.

Before moving on to the crisis in which the European and global frozen raspberry market found itself in January 2023, let’s take a short digression into history.

After the unusually high prices of raspberries in 2021, farmers in many countries became massively interested in its cultivation and began expanding plantations. Even counties, which have never produced raspberries commercially, such as Uzbekistan or Tajikistan, joined this trend.

This forced EastFruit team to issue a warning about the consequences, and our Second Raspberry Boom article received a lot of international attention. Nevertheless, production of raspberries still increased significantly. Many investors, of course, hoped that product prices would remain at the same high level and ignored our warnings and many simply never heard of it.

If the price of a certain product goes up to a very high level, consumption of that product is usually reduced and an alternative is being sought. This was certainly the case of raspberries, which were suddenly becoming the most expensive berry.

However, in 2022, another factor was added to the problem – the full-scale military invasion of Russia into the territory of Ukraine, which forced Ukrainian producers of frozen raspberries hurry up with the sales of their products. Thus, adding to the pressure.

At the beginning of the 2022 season, prices for frozen raspberries in the EU were still at a very high level of around 5 euros per kg, but the real transactions took place at a price of about 4.7 euros per kg. Of course, we are talking about “extra class” raspberries, or highest quality grade. Serbia, the world leader in frozen raspberry exports, posted even higher prices.

Freezing plants in many countries of the world were guided by these prices. Thus, they began to procure raw material for freezing considering this very high price levels. Even in Tajikistan and Uzbekistan, the purchase of raspberries for freezing at the beginning of the season happened at prices of $3.0-3.5 US dollars per kg, which assured local growers huge profits. Although prices were later reduced somewhat, it is obvious that the freezers planned to export frozen raspberries no cheaper than US $4-5 per kg.

This madness was happening while a huge war was going in Europe and the economic recession was looking very likely for the EU countries and was already happening in Russia. Let us mention the obvious – raspberries are not, as you know, an essential food product. However, processors did not make the necessary adjustments and continued to procure very expensive fresh raspberries for processing.

August shock – the factor of Ukraine

August 2022 for some reason came as a real shock to the market participants, when Ukrainian exporters began to offer high quality raspberries at prices close to 3.7 euros per kg.

Under these conditions, the market simply “stopped” because no one understood what the price would be. Accordingly, mainly Ukrainian exporters managed to sell. They could afford such a low price, partly due to the devaluation of the national currency and due to lower raw material purchase prices.

Naturally, in such conditions, prices in the market gradually decreased. Exporters from other countries also had to reduce the prices of their products, although most of them “held” raspberries in the hope of price recovery in the future, when Ukraine stops the sales.

Autumn shock – remontant raspberry factor and a factor of terrorism

Warm autumn allowed Ukraine to harvest a good harvest of remontant raspberry varieties. Against the backdrop of a high production, local processors lowered their purchasing prices once more, realizing that prices on the world raspberry market continue to fall.

In addition, as Russia launched massive missile strikes against Ukraine’s civil energy infrastructure, many feared problems with frozen produce storage. Therefore, they accelerated sales even more, putting a new round of pressure on raspberry prices.

“As a result, by the end of November, wholesale prices for high-quality frozen raspberries in the EU had already fallen to the level of 3.3-3.5 euros per kg. According to Yulia Timoshenko, manager of the Moldovan fruit freezing company Tiferet, the price of raspberries of the “gris” lowest quality category has completely collapsed, falling to the level of 1.65 euros per kg, and in January 2023 it often changed as often as four times a day.”

It is not surprising that Ukraine managed beat its own record of raspberry exports by volume and shipped around 40,000 tons of frozen raspberries abroad. However, producers of frozen berries from other countries, primarily from Poland and Serbia, had a very hard time, because they bought raw materials at a rather high price, and were often forced to sell products at a loss.

The baton for a long-term reduction in the price of frozen raspberries in the EU passed in January 2023 from Ukraine to Morocco. As soon as it seemed to the European freezers that by the end of 2022 the price of raspberries had stabilized around 3.20-3.30 euros per kg for “extra” quality, Moroccan exporters entered the market in January 2023, offering raspberries at 2.5- 2.6 euro/kg!

As a result, Poland again lowered its purchase price for Ukrainian, Moldovan and other European raspberries to 2.8-2.9 EUR/kg.

There is not much feedback on the quality and information on the supply volumes of raspberries from Morocco, but according to the rules of the market, even several truckloads at a lower price can break this entire fragile market.

At the same time, freezers and traders in Ukraine, Serbia, Poland and Moldova still have a considerable amount of raspberries of different quality grades on in their storages. Even in Central Asia some producers still carry significant stocks of raspberries and are not able to sell them without a loss.

Below is an indicative chart of average monthly prices for “extra” quality frozen raspberries (95/5 and 90/10) in the EU countries from July 2022 to January 2023.

For many producers, it is very painful and unprofitable to sell raspberries at the current prices. Moreover, the demand for raspberries, despite the price decline, remains low.

Some Ukrainian producers procured raw material from remontant autumn varieties at lower prices than summer harvest, since at the time of the purchase of raw materials they had current pricing information on the market.

How will the market develop in 2023? Another dive in the history to find answers.

In fact, nothing fundamentally new is happening on the market of frozen raspberries. We have seen this before.

“Many people remember the situation a few years ago, when prices of frozen raspberries were under 2 euros per kg in Europe, and even fell significantly below this level. At that moment, the entire chain from the farmer to the final product was under pressure from the low price level. It was not profitable for farmers to sell their raw material for processing. Thus, some left the berries unpicked, some sold them at loss, and many uprooted their raspberry plantations,” says Yulia Tymoshenko.

“The period of low world prices for raspberries in 2017–2018, which also affected the 2019 season, was provoked by the rapid growth in the production of this berry in Ukraine. As a result, consumers have become accustomed to the fact that raspberries have become one of the most affordable berries. This led to an increase in the number of products where raspberries are used: various types of yoghurts, smoothies, and confectionery and bakery products. Accordingly, low prices have become the key to rapid growth in demand for raspberries worldwide. Raspberry penetrated the markets of the countries where it has never been produced, e.g. the markets of ASEAN countries. Meanwhile, farmers in different countries of the world massively got rid of raspberries, because the low price of frozen raspberry made it unprofitable to grow fresh berries, especially against considering the increasing labor shortages,” says Andriy Yarmak, an economist at the Investment Centre of the Food and Agriculture Organization of the United Nations (FAO).

“When in 2021 there were problems with the raspberry harvest in Serbia due to climatic anomalies, it turned out that the demand for this berry in the world is very high and continues to grow by inertia. Therefore, prices quickly soared to an average of 5 euros per kg. Now we see a reverse cycle, when high prices and falling consumer incomes, on the one hand, have a negative impact on consumption and thus, demand, while producers have already expanded plantations, and production remains high,” explains the trend Andriy Yarmak.

Will raspberry prices continue to decline?

“The market is too unstable to make any forecasts,” says Yulia Tymoshenko. “On the one hand, it is likely that some producers will enter the 2023 season with leftover frozen raspberries from the previous season as demand was low and motivation to sell was also low. On the other hand, the response of farmers during the season remains an unknown component. Perhaps, in the face of rising costs, they will be shocked by offers of low purchase prices, because their sharp decline is already quite easy to predict now. However, at what level the supply and demand for frozen raspberries will stabilize, it is difficult to assess now – you need to wait for the start of the new season,” the expert says.

In 2022, although the prices for frozen raspberries, even in Ukraine, were high enough for producers to earn money on cultivation, the first signs of dissatisfaction with the level of these prices have already begun to appear.

In 2023, purchase prices will obviously be significantly lower, since the price of a frozen raspberry has almost halved since the summer of 2022. At the same time, according to our data, the area under raspberries has not decreased in any of the key producing countries. Some countries even continued to plan rapidly, especially in Central Asia.

Therefore, new price realities in raspberry prices may be an unpleasant surprise for farmers in the summer-fall of 2023.