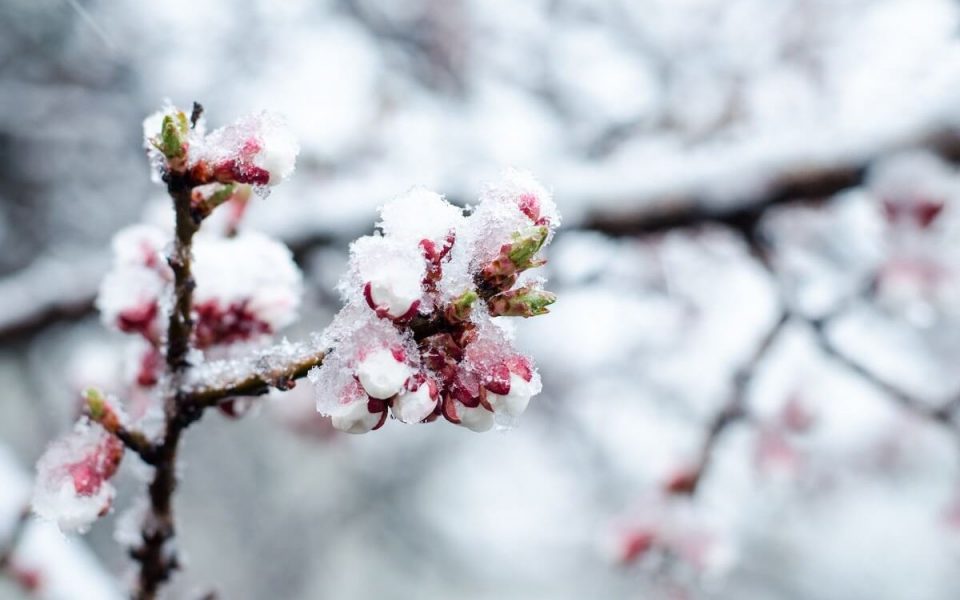 Home › News › Farmers in Uzbekistan estimate crop losses from 30% to 80% for cherries, apricots, grapes, and almonds

Last week, EastFruit analysts drew attention to the impending cold cyclone coming to Central Asia as a serious threat for the future fruit harvests. The abnormally warm weather established in the region from the end of January and the beginning of February for this time of the year led to nature awakening too early and, as a consequence, the blooming of stone fruit trees. In the southern and central parts of Uzbekistan, spring came a few weeks ago. There, almonds, apricots, and cherries blossomed in all their glory and, in the north, the buds are just ripe and ready to bloom.

The current flowering pattern and the predicted sharp cooling to -9 at night and to -5 degrees Celsius in the daytime resemble two waves advancing against each other. The resulting collision of which, with a high degree of probability, will result in the loss of a part of the future fruit harvests.

EastFruit interviewed growers, farmers, and specialists from the Fergana Valley, Bukhara, Samarkand, and Surkhandarya regions of Uzbekistan on how they assess risks of losing future stone fruit crops. It should be noted that the first three regions provide almost 70% of the fruits and berries produced in the republic.

Below are several viewpoints reflecting the most common vision by region:

Nizom Akbarov, a farmer from Kuvasay in the Fergana region, mainly fears large losses in the apricot crops:

“Kuvasay specializes in farming. Without exaggeration, I can say that all kinds of fruits that are in Uzbekistan are grown here. My orchard is mainly represented by three types of fruits: cherries, peaches, and apples. In our area, no trees have blossomed, but the buds are already ripe and just about to bloom.

As for the risks from the cold weather that is coming, I am more concerned about the apricot harvest since these trees are inherently weak. In addition to cold weather, their yield is also affected by the level of precipitation and other factors related to weather conditions. If the weather forecast is correct, we may even lose the [apricot] harvest this year.

Sweet cherries are generally more persistent in this regard, but at subzero temperatures predicted by forecasters, losses cannot be avoided here either. I remember how at the end of March 2013 or 2014 the cold also hit with snow – we lost about 35% of the sweet cherry crop.”

Mahmud Oripov, a specialist in agricultural economics with a PhD and associate professor of Bukhara State University, believes that the loss of stone fruit yield from the coming cold weather can range from 30% to 80%, depending on the variety and type of these fruits:

“The sudden and abnormal weather for this time of year – sharp warming since the beginning of February this year – led to an early awakening of nature from hibernation. As a result, we see the flowering of almonds, certain varieties of apricots (but not all of them), and early varieties of apples, in particular in Bukhara. Also in a state of flowering are sweet cherries, sour cherries, and a type of plum used for prunes called “kora olu” («кора олу» in Russian), or dark cherry, one of the famous gifts of nature in Bukhara specifically.

Harvest losses from the upcoming cold weather can be significant. If we talk specifically about the types of stone fruits, then under the threat of loss:

Ilham Dzhuraev, a grower from Payaryk district of Samarkand region:

“Almonds and apricots have already blossomed in our area. Almonds can be considered more resistant to sudden cold snaps than apricots, which are predicted in the coming time. On the harvest of the latter, we can lose 70-80% if such cold weather hits.”

Growers and farmers interviewed from other districts of the Samarkand region located closer to the mountainous areas reported that fruit trees have not yet blossomed. 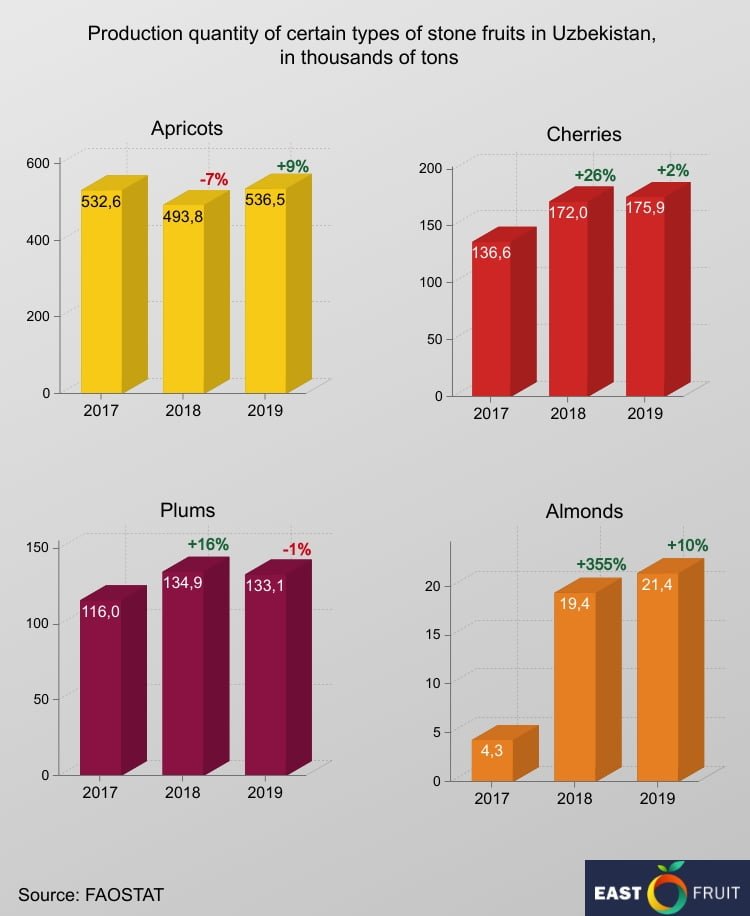 Gulpari Bozorova, a farmer from the Surkhandarya region, sees the risks from the coming cold weather not only for stone fruit species but also for grapes:

“Apricots, almonds, cherries, and Japanese quinces have already blossomed in our country. Of these, the almonds have bloomed and managed to create fruits. Forecasters predict a sharp cooling with minus temperatures at night. We are already worried about the future harvest.

At-risk are apricots, cherries, apples (early) and quinces. The future grape harvest is also under threat since grape bushes are not buried in Surkhandarya in winter, they winter in the open. Sharp abnormal warming, which began at the end of January this year, led to an untimely awakening of the vineyards. Now, we are worried that we may lose part of the harvest.

In general, crop losses can be around 30%, but the weak link is apricots. The harvest of this stone fruit species can suffer even from strong winds, frequent rains, not to mention freezing temperatures after flowering.”

All growers and farmers interviewed intend to use the old traditional way of protecting their orchards from such sudden changes in temperature during or on the eve of flowering trees: prepare a mixture of manure and hay, place such heaps throughout the orchard and set them on fire. The resulting thick smoke envelops the orchard and thus helps to protect trees from sub-zero temperatures.

The volumes of apricot production in Uzbekistan for 2017-2019 were relatively stable with fluctuations within 10% (+/-). The production of sweet cherries during this period increased by 39.3% and the production of almonds generally increased 5 times. It is difficult to predict how and to what extent the coming cold weather will affect the production volumes and prices of stone fruits in Uzbekistan. However, EastFruit will closely follow the development of events and promptly inform about all changes.