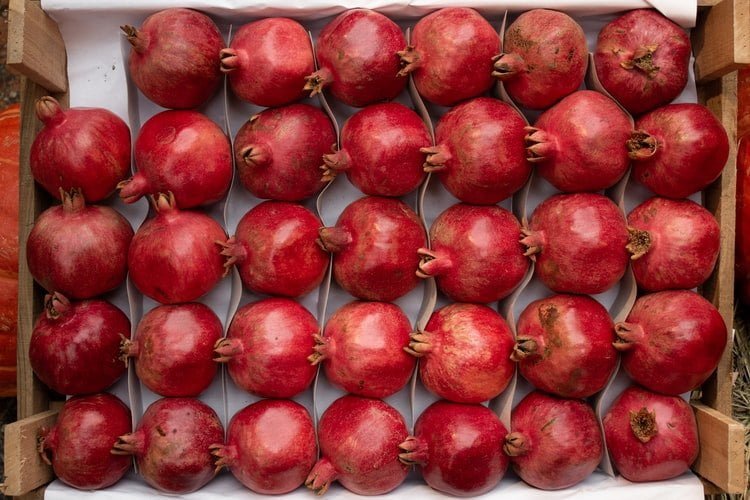 Uzbekistan is increasing the volume of pomegranate exports and expanding their markets, EastFruit experts say.

The video on the Telegram channel Vodiy Bozor (Valley Market) shows Uzbek pomegranates in one of the retail outlets in South Korea. Moreover, the price for a package of three pomegranates indicating the country of origin – Uzbekistan, is sold at 10,000 KRW ($8.4), which means $2.8 a piece! The video does not specify the city in South Korea and whether it is a supermarket or a retail outlet of a different format.

In just two months of the pomegranate export season – from the beginning of August to the end of September 2021, Uzbekistan exported 5.9 thousand tons of pomegranates worth $4.3 million. In the same period of 2020, the volume of pomegranate exports amounted to 3.8 thousand tons worth $4.6 million. Compared to last year, the volume in physical terms increased by 55%, but the revenue decreased by 7%. It is obvious that the prices of exported Uzbek pomegranates are much lower this year – by about 30-40%, which led to a decrease in export earnings.

Read also: Up to 50% of transportation costs are reimbursed to Uzbek exporters

Compared to other fresh fruit and vegetables supplied from Uzbekistan to foreign markets, the pomegranate export season lasts longer – from August of this year to February-March of the next year, i.e. 7-8 months. Last season – from the beginning of August 2020 to the end of March 2021 – the volume of pomegranate exports from Uzbekistan amounted to 15.3 thousand tons worth $15 million. The start of the current 2021/22 season looks promising, even with a decline in export earnings.