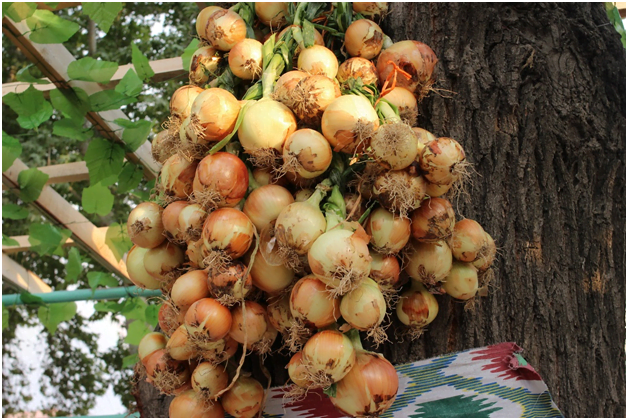 Onion production is the most important income-generating activity for the farmers in the district. From each hectare, they receive from 60 to 70 tons of early onions. In the fall of 2020, they sowed early onions mainly of the Jayhun and Meroj varieties on an area of ​​3,750 hectares and are now taking care of the seedlings. Already in April – May, farmers will be able to collect and sell early onions.

Last year, Tajik farmers from Jayhun district produced and sold 222,000 tons of onions. Out of this volume, 34,000 tons were exported to Kazakhstan, Russia, Uzbekistan, Kyrgyzstan, and Afghanistan. In the coming year, the district farmers hope to increase onion production and export at least 35,000 tons of onions.

“There are 1,300 farms in our jamoat, and almost all of them are focused on the production of early onions,” says the chairman of the Panj jamoat of the Jayhun district, I. Kalonzoda. “Collecting and selling early onions and generating income allows farmers to re-sow in the summer. As a rule, they grow carrots, other vegetables, and melons on these areas later.

In the Jayhun region, there are currently 17,400 hectares of irrigated land, where 1,750 farms operate. This southern region’s climatic conditions allow farmers to get up to three harvests in one year.