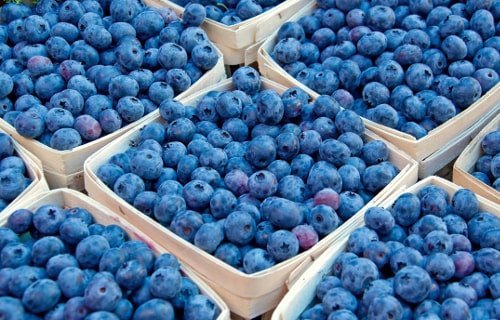 In 2020, Ukrainian blueberry producers received from 30 to 50% less of the berry harvest than in 2019, said Valeriy Lyashinsky, Technical Director of Rosetta Agro (Ukraine), assessing the results of the year for berry growers.

According to the technical director of Rosetta Agro, this happened due to abnormal climatic conditions.

“Firstly, we had no winter (i.e. lack of low air temperatures – EastFruit), and the spring weather was very changeable. The main reason for the lack of harvest is spring frosts, which significantly damaged the buds of plants,” said Valeriy Lyashinsky.

According to the expert, it is still too early to talk about unfavourable weather conditions for berry-growers this winter, 2020-21. “I hope the winter will be cold. Warm winters negatively impact plants. Low temperatures contribute to the destruction of plant pests and diseases,” said the berry market specialist.

Assessing the impact of the global coronavirus pandemic on the berry market, Valeriy Lyashinsky noted that, in general, it did not have such negative consequences as on other agricultural industries. On the contrary, people worldwide began to consume more berries, trying to take more care of their health.

“However, this year, there were organisational problems. For example, with the workforce for picking berries,” said Valeriy Lyashinsky.

Considering prices on the Ukrainian blueberry market, the specialist noted that in 2020, the prices were on average 25-30% higher due to lower harvest and the increased demand.

According to the technical director of Rosetta Agro, Ukrainian blueberry producers are trying to open up new markets for themselves since the EU market, which is now the main external sales channel for berry growers, is relatively stable but not the most expensive.

“This year our company has tried to operate, in particular, in the markets of Southeast Asia. The fundamental difficulty was that the products to these markets had to be delivered by air. There are also other challenges. For example, there are restrictions on the unloading of 1 ton of products from one plane from Ukraine: if you want to unload more, then you need to do it through Turkey. It isn’t easy, and of course, the volume of our exports to these countries is still much smaller than to the EU. However, prices for Ukrainian berries in Southeast Asian countries are much higher.

Besides, the export to Belarus, from which the Ukrainian blueberries were later re-exported to the Russian Federation, this year decreased by at least half,” said Valeriy Lyashinsky.

Considering blueberry cultivation technologies, Valeriy Lyashinsky noted that it is challenging to imagine them without irrigation.

“And I mean drip irrigation. Without this, the profitability of the berry farm is questionable. Because the nutrition of this crop also goes through drip irrigation, particularly the so-called fertigation process. Without this, you will not get a normal harvest, and the crop will not develop properly. Sprinkler irrigation and cultivation options are not a serious professional approach to blueberry production,” said the technical director of Rosetta Agro.

Valeriy Lyashinsky also voiced the topic of the correct choice of varieties. According to the specialist, farmers should ask themselves: who is the client I’m going to sell my blueberries to in the future?

“Depending on the answer, they can choose early, middle or late varieties. In any case, blueberry plantation lifespan is very long and is at least 30 years, unlike, for example, an apple orchard, which is uprooted after 10-12 years. I have personally seen 40-year-old plantations that yielded no worse than 5-year-olds. Of course, in such a long time, varieties may become morally obsolete. Therefore, farmers can replace them for market reasons, but the plantation can bear fruit very well. Therefore, farmers need to be very careful about the choice of varieties. After all, if we plant varieties that are already 30 years old and plan to grow them for 30 years more, we need to think carefully whether it is worth it. Therefore, we need to pay attention to new varieties that enter the market only if they are better than the old ones. This is the general principle of variety selection,” said Valeriy Lyashinsky.

He also added that today on the Ukrainian market the most promising varieties among the early ones are Duke and Draper, among the mid-season – Valor and Calypso. Among the late – Liberty, Cargo, and Aurora.