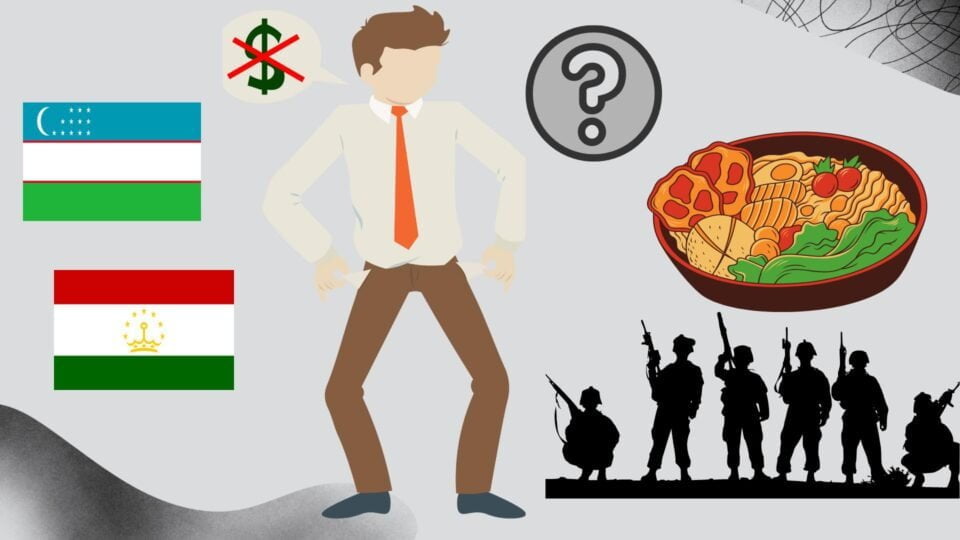 Home › News › How much will residents of Uzbekistan and Tajikistan pay for russian aggression in Ukraine?

EastFruit experts recently published assessments of the impact of russian aggression in Ukraine on food security and macroeconomic stability in Uzbekistan and Tajikistan. Now we want to give a more accurate estimate of how much citizens of these countries will pay for the decision of russian dictator putin to invade peaceful Ukraine.

We assessed the devaluation of local currencies against world currencies, the decline in income from labor migrants and abnormal inflation, i.e. inflation exceeding pre-war expectations. We also took into account the aggravation of the food security in the second half of the year and the further aggravation of logistical problems.

We want to note right away that according to international experts, the strengthening of the ruble in late March – early April, which led to a sharp strengthening of the Uzbek sum and Tajik somoni, is a short-term phenomenon. It cost russia $40 billion in just one month of direct intervention in the foreign exchange market, and russia does not have large reserves, since they are arrested or under sanctions. In addition, there are now 3 or even 4 exchange rates in russia at once, and the real exchange rate differs from the official one by almost twice.

Since russia received its main income from the export of oil and gas, which supported the ruble exchange rate, then the bad news for russia will also be a sharp refusal of the main buyer – the EU countries, from these and other russian goods. Imports of gas and oil have already fallen significantly, and within 2 years Europe will almost completely abandon them.

Accordingly, the devaluation of the russian ruble against the dollar and the euro is inevitable in the coming months. Moreover, this time the fall may become completely uncontrollable and affect the exchange rates of countries very closely connected economically with Russia. In particular, this applies to Uzbekistan and Tajikistan, but to a much greater extent to Kazakhstan and Kyrgyzstan.

So, how much will each resident of Uzbekistan and Tajikistan pay for the war unleashed by putin and his electorate in Ukraine?

We took the food baskets of Tajikistan and Uzbekistan as the basis for the calculation. Taking into account the forecasts of rising prices for basic goods and services in these countries, it turns out that each resident of Uzbekistan will pay about $1 100 for the war in Ukraine in 2022, and each resident of Tajikistan will pay about $700. This applies to every resident, including children.

In other words, if the average household size in Uzbekistan is 5 people, such a family will pay about $5 500 per year for russia’s war against Ukraine! Similarly, for Tajikistan, where the average family size is 5.8 people, the loss of a household from the war unleashed by russia will be $4 100! This is real money that these families could spend on educating their children, improving their living conditions or medicine. More precisely, this means that, for example, one does not have enough money for an operation that would save the life of a child or an adult.

These estimates do not take into account the loss of income of countries, in particular from the reduction in money transfers from labor migrants, which will also be measured in billions of US dollars. And this means that construction in Uzbekistan and Tajikistan may stop, and construction and development companies that used to sell new housing to families of labor migrants who sent home money earned in russia may go bankrupt. This is a huge loss for the economy, for people and their families.

This, accordingly, will result into a crisis in other areas related to the construction industry and will slow down the development of retail and wholesale trade, which is the engine of the economy of these countries. Returning labor migrants, who were previously sources of income, will become sources of expenses – Uzbekistan and Tajikistan will need to increase food imports, while the global food crisis will only be worsening.

The livestock sector will suffer more than others in the agriculture of Uzbekistan and Tajikistan. Ukraine, the largest feed exporter in the region, will not be able to export almost anything in 2022. Minor volumes that will be exported will go to the EU countries. Thus, protein-deficient Uzbekistan and Tajikistan will experience an acute shortage of livestock feed and a sharp increase in their cost, while the real incomes of their population will decline. This means that it will be impossible to raise prices for milk and meat, since consumers will not afford them.

Accordingly, as early as June-July, a massive reduction in the number of farm animals may begin in Uzbekistan and Tajikistan, primarily in professional enterprises. This will temporarily stabilize meat prices as supply increases, but in the long run, meat prices could soar to alarmingly high levels.

And this is the price that innocent residents of Central Asian countries will pay, and are already starting to pay, for putin’s criminal aggression in Ukraine.