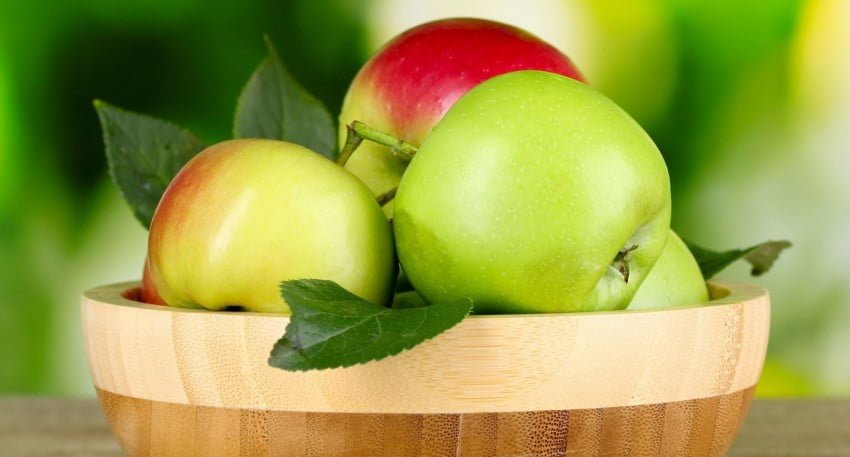 The main harvesting season of apples starts in the second half of August in Georgia, but summer varieties in small quantities are already available on the market. Farmers expect that this year’s apple production will be lower than last year. 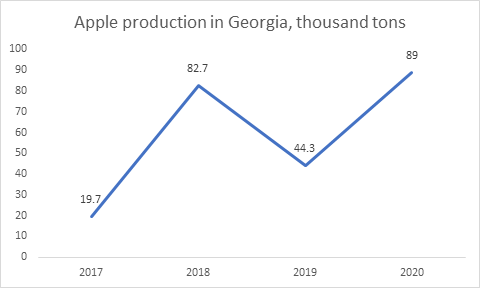 Georgian apple production data from the previous four years shows that yield is high every other year because of alternating bearing. Alternate bearing is less of a problem in intensive orchards, where crop load management is easier to do. However, extensive apple orchards are still prevalent in Georgia.

According to Doctor of Agricultural Sciences Zviad Bobokashvili, head of the fruit crops department of the Scientific Research Center of Agriculture of Georgia, based on a census conducted in 2014, there were about 9,500-10,000 hectares of apple orchards in the main apple-producing region of Shida Kartli. It is noteworthy that, with the support of the state, more than 1,300 hectares of new modern intensive apple orchards have been planted in the country since 2015.

Dr. Bobokashvili explained that alternate bearing is not typical for all apple varieties, but for some varieties this is a biological feature and this factor still affects apple harvest in Georgia. Expert expects this year apple production will be 20%-30% lower than the last year, mainly due to low production in old orchards.

“Alternate bearing is typical for both extensive and intensive apple orchards, but it is easier to manage it in intensive orchards. One of the methods is thinning. Thinning considers removing excess fruits from the trees in a specific period. Otherwise, if the farmer allows the plant to give an excess crop one year, the next year the yield decreases as the plant “gets tired”.

In Georgia the period for thinning is the end of May – the beginning of June, depending on the region.   After thinning the trees are left with enough biological resources to produce buds for the next year. In old orchards, it is almost impossible to do this because the trees there are tall and the thinning process is difficult, on the other hand in intensive orchards trees form green walls and the operation is much easier to perform.”

A large apple grower in Shida Kartli region “Tiriphoni Gardens” expects over 1300 tons of apples this year from the 31-ha orchard, which was planted step by step starting from 2014. The company representative Zurab Gojiashvili explains that annual high harvests are ensured by orchards planting in different years. The company has intensive orchards, where they use the thinning method to eliminate the alternate bearing. This year together with thinning they have also used plant growth regulator products for this purpose.

Gojiashvili thinks that in general prices will be higher this year: “Last year the minimum price on already picked apple was 1.2 GEL ($0.39) We expect that this season minimum price for us will be 1.5 GEL/kg ($0.49) farmgate,” said Gojiashvili.

Another apple grower from Shida Kartli region is Eduard Shermadini. He owns 9 ha apple orchards from which 4 ha are the old, extensive and the rest is new, intensive orchards. Shermadini expects less harvest in old orchard, 15 tons per ha, compared to 35 tons last year. Shermadini has already sold early sort of apple “Lodi”, prices started from 1.5 GEL/kg ($0.49) and fell to 1 GEL/kg ($0.32) recently. He thinks that minimum price for other varieties will be around 1.2-1.3 GEL/kg ($0.39-$0.42) this year.

The peak apple harvesting season in Shida Kartli starts on August 20 with early variety “Gala”. Government will continue subsidize non-standard apple this year too. Minimum purchase price for processing companies involved in the program is set to 0.22 GEL/kg ($0.07) from which 0.1 GEL ($0.03) will be a subsidy.