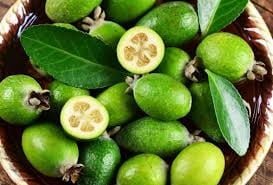 The production area of feijoa, which is an exotic fruit for our region, is rapidly growing in Georgia. This crop has become especially popular among farmers in the Samegrelo region where today almost all residents have at least a few feijoa bushes in their backyards. Locals like this fruit and the demand for it in other regions of Georgia is also increasing. Feijoa is an excellent source of iodine unlike any other plant product in the world.

To understand why Georgia became interested in feijoa, EastFruit turned to Zviad Bobokashvili, Doctor of Agricultural Sciences of Georgia. Together with Katerina Poberezhnaya, an international consultant to the Food and Agriculture Organization of the United Nations (FAO), they prepared an interesting video about feijoa, in which you can find out all the details about this interesting and promising crop and how it grows and blooms in Georgia.

EastFruit video about feijoa from Guria in Georgia:

Feijoa was introduced to Adjara and Abkhazia in Georgia at the beginning of the twentieth century. Dr. Bobokashvili says that by 1940 there were about 160 hectares of feijoa in Georgia; now it has grown to 360-400 hectares. The main areas of feijoa are concentrated in Western Georgia in the regions of Zugdidi, Lanchkhuti, Kobuleti, Khobi, and Samtredia. Also, some trees are found in the eastern regions of Sagarejo, Gurjaani, Lagodekhi, and Marneuli.

There are very few industrial plantings of feijoa, most are grown in personal plots. However, in Megrelia (Western Georgia), the first industrial plantations of feijoa are appearing because the yield reaches 15-20 tons per hectare. Feijoa is mainly grown in Georgia on the Black Sea coast because this fruit has a low cold resistance and is damaged by frosts at 10-12 degrees below zero. (Read more about the technology of growing feijoa at the end of this article.)

An interesting fact is that feijoa is pollinated not only by insects but by birds as well. Even feijoa flowers are delicious. The flowers are what attract birds, but people also love the taste of feijoa flowers.

Feijoa has good prospects in the organic segment. The plant does not have very many pests and diseases in Georgia so it can also be grown organically. This will further increase the value of the fruit when exported to countries where organic is already an established trend. 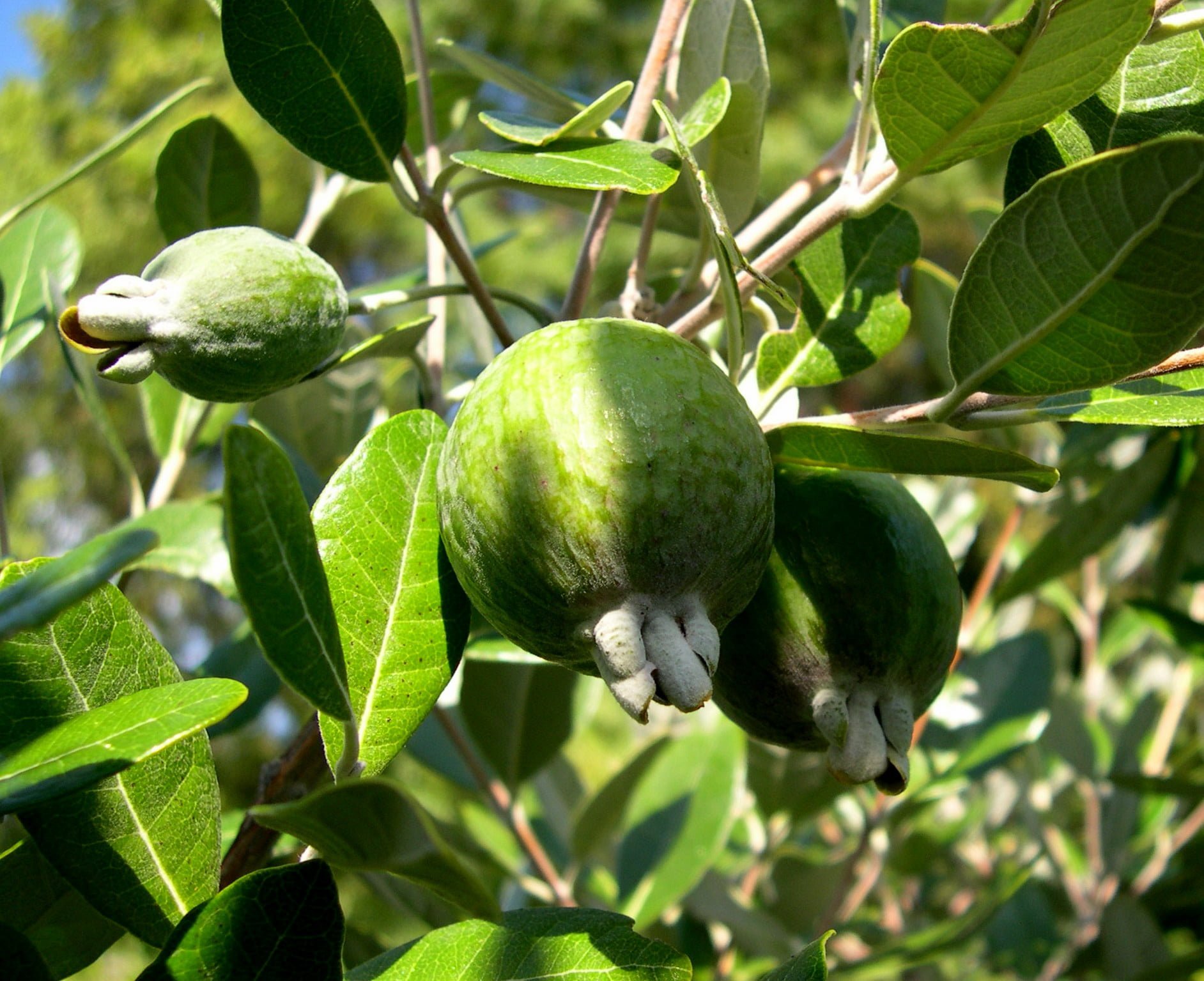 Considering the area expansion, the production of feijoa in Georgia is growing rapidly. According to EastFruit analysts, Georgia is actively increasing the export of feijoa. In 2019, the export of Georgian feijoa almost doubled reaching 400 tons. The main market was Ukraine where 235 tons of these exotic fruits were sent. Armenia was also a major buyer. Supplies of feijoa were mainly made to the markets of neighbouring countries since this fruit is not very transportable. Recently, export shipments of feijoa from Georgia to Russia, Slovenia, and Belarus have also been registered. If a system is developed to finalize the data for these exotic fruits, then it is possible that Georgia will be able to make good money on exporting feijoa to EU countries.

Superba and Coolidge are the most widespread varieties of feijoa in Georgia. Superba is an Australian variety characterized by medium-sized fruits weighing 30-50 grams with a rounded, smooth surface, medium-ripe variety, requires cross-pollination, and is characterized by high yields. Coolidge is also an Australian variety that is medium-sized, average fruit weight of 40-60 grams with an elongated elliptical shape and slightly woody skin, early-medium maturity variety, self-pollinated, and characterized by high yields.

Other industrial varieties of feijoa, which are also widely cultivated, are Triumph, Mammoth, Trask (improved clone of Coolidge), Choyesana, Nezamets, and others. Georgia should pay attention to the more transportable and lighter varieties that are now appearing among breeders particularly in New Zealand. This would allow Georgia to increase the export of feijoa to the EU countries.

It is noteworthy that the production of feijoa on a commercial scale is relatively rare in the world. Its main manufacturer and exporter are currently New Zealand, which commercializes and advertises the product extensively. Feijoa is also grown commercially in Australia, the United States (California, Florida), Italy (Sicily), and Portugal.

Citrus market analysts have noted an increase in demand for feijoa, especially in Europe and the United States. Therefore, it would be wise for Georgian farmers to take the cultivation of this crop seriously. With the increased production of feijoa and improved fruit quality as well as the development of cooling and processing infrastructure, it is possible that feijoa will become a new and promising export product. 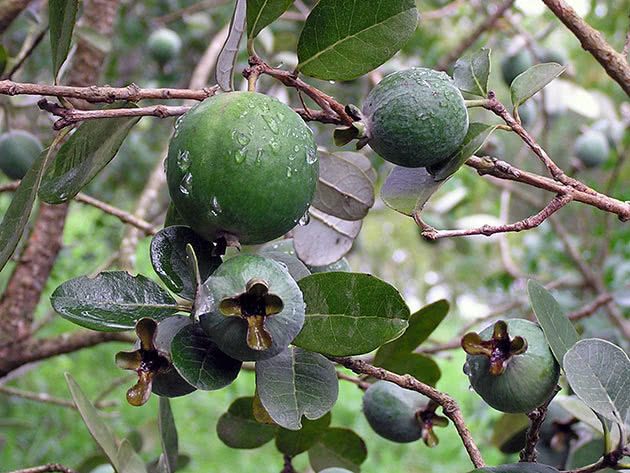 Feijoa is a subtropical crop and much more adapted to the climatic conditions of Georgia than citrus fruits. In Adjara, feijoa begins growing in early March, flower buds appear at the end of April, flowering begins in the first ten days of May through June. Flowering lasts 25-30 days, sometimes even up to 50 days.

The feijoa plant is characterized by relatively weak growth, begins to germinate in the 4th-5th year after planting, and enters full fruiting in the 8th-10th year. The average yield of a bush is 15-18 kg, although in some cases plants can produce up to 22-30 kg. The average yield per hectare is 15-20 tons/hectare.

For growing feijoa plantations, it is best to choose fertile, humus-rich, humus-calcareous soils, brown soils, calcareous or slightly alluvial soils of medium and light texture. Less suitable areas are eroded slopes, heavy clay and loamy soils, and less drained wetlands. Before planting, the soil is deeply cultivated 40-45 cm, then the soil is loosened and prepared for planting a seedling.

For plantations, the recommended planting schemes are 4×4 and 4×3 metres, but it can also be planted in 5×2 and 5×3 metre system. Feijoa is planted in pre-prepared pits 40-45 centimetres deep. When planting, it is best to add 12-15 kg of humus or compost. The newly planted plant is tied to a support in loose soil. In places where there is no danger of winter frosts, seedlings are planted in late autumn or in spring from March-April. For planting, it is better to use two-year seedlings with loam soil since seedlings with bare roots do not take root well.

Manure and peat compost is used on plantations during autumn tillage of 80-100 ton/hectare. Phosphate flour, ammonium nitrate, and potassium salt are used as mineral fertilizers. In an adult plantation, it is recommended to add 150-180g of nitrogen, 200-220g of phosphorus, and 100-120g of potassium per bush in terms of the active substance.

The feijoa plant takes the form of a bush. 5 to 6 of the most well-developed shoots are selected and the rest are cut off at the base. Feijoa develops relatively less frequent offshoots so it does not require a lot of pruning. New shoots as well as dried and diseased ones are usually removed in the spring.

Feijoa is relatively less susceptible to pests and diseases so it will not be difficult to grow organically. Yet, it is susceptible to mites as well as diseases with leaf rot. In this case, it is necessary to use the appropriate insecticides, acaricides, and fungicides.

The early feijoa varieties are harvested at the end of September. The fruit does not ripen at the same time, therefore several days of harvest are required. The period of massive ripening begins in the second half of October to the first half of November. After ripening, the fruits become light green, soft, and fragrant. Overripe fruits easily fall off when the branches are shaken. The fruits are picked by hand and placed neatly in baskets and buckets. Feijoa fruits have a shorter shelf life so the storage time in cool warehouses, depending on the variety does not exceed 2-4 weeks. 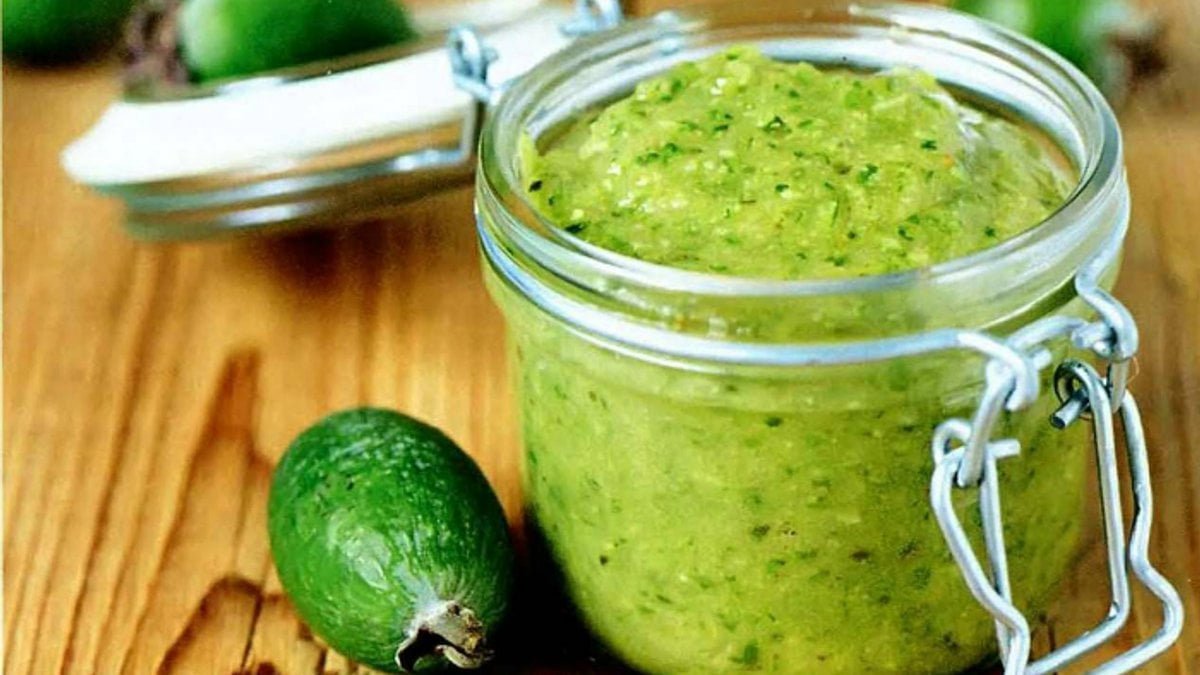 Feijoa (Acca sellowiana or Feijoa sellowiana Berg) is an evergreen shrub of the myrtle family, 3-5 metres tall with an original grey stem and beautiful shiny dark green leaves. Feijoa has ovoid, green fruits weighing 30-60 grams, which are characterized by an incomparable sweet-sour taste and pineapple aroma.

Feijoa is a very healthy fruit. The use of these fruits in food has a positive effect on human health, which is largely due to the chemical composition. Its fruits are rich in pectin, sugars, various trace elements, vitamins, and most importantly, contain a particularly large amount of iodine (2.0-4.0 mg/1000 g). Marmalades, jams, compotes, lemonades, and juices are also made from feijoa. Thanks to the original tree with beautiful evergreen leaves, long flowering, are often used for decorative purposes. 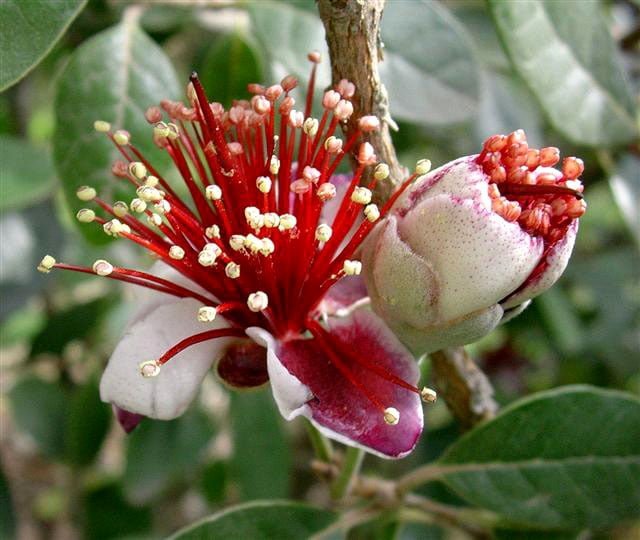 Feijoa is native to South America and can often be found in the wild in Brazil, Paraguay, and Argentina. The plant was first described in 1819 on a scientific expedition to the province of Rio Grande do Sul in southern Brazil led by the German naturalist Friedrich Sellow and Brazilian scientist João da Silva Feijó. It is with their surnames that the public name of this crop is connected – “Feijoa”, and the scientific name is “Sellowa”. A special role in the study and distribution of feijoa was played by the French professor Edouard André of the Versailles School of Fruits, who brought this crop to Europe from La Plata, Argentina in 1890, and the German botanist Ernst Berger, who was the first to make its botanical classification.

Was wondering if you could advise on the nurseries in Europe who sells commercially for small farmers grafted Feijoa plants?

We can’t make such recommendations but if you google it. there are several companies that pop up from Italy.