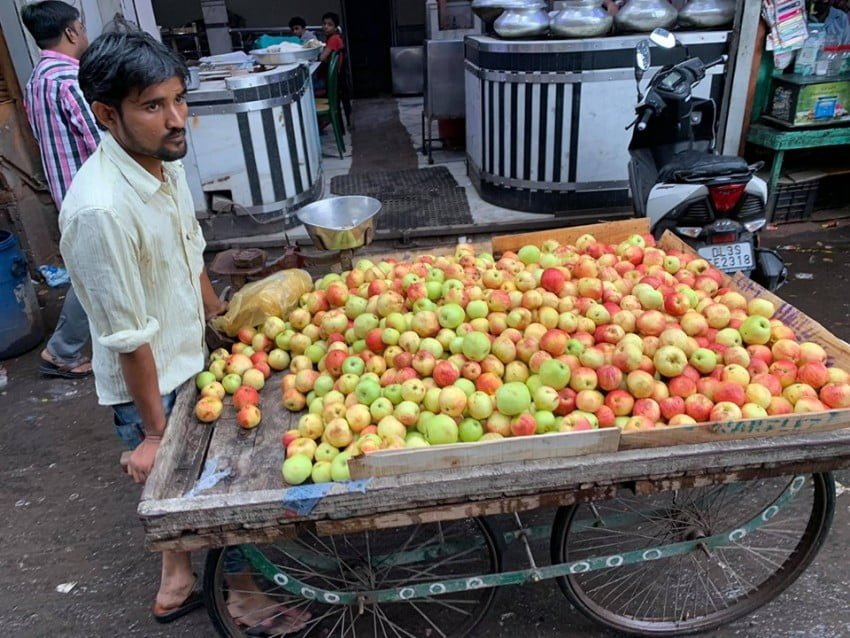 India is the most important market for all apple exporting countries. This country already imports about 300,000 tons of fresh apples annually and imports are growing rapidly. India is one of the four largest world apple importers, but few people really understand how this market works and what factors affect it.

EastFruit experts decided to fill this gap and explain the most common misconceptions and the most unexpected facts about the Indian apple market. We hope that this information will help in the more successful exports of apples to the Indian market.

Indeed, India is sometimes called the “fruit basket of the world” thanks to the huge assortment of fruits produced in the country. Apples have been consumed in India since ancient times. It is a common and standard daily product just like mangos, bananas, grapes, guava, lychee, papayas, oranges, watermelon and sapota (zapota, or sapodilla). Therefore, apples are regularly bought by rich and poor Indians alike, albeit at different prices and different qualities, because the assortment of apples in India is very wide.

Misconception #2 – Apples do not grow in India because it is too hot.

After we learned that the apple is a traditional product for India, you can guess that it actually grows here. According to some estimates, India is even one of the five largest world apple producers and grows 2-3 times more apples than the whole of Ukraine! In India, there are northern mountainous and hilly states where there is agro-climatic zones ideal for obtaining high-quality apples. Overall, 2.1 to 2.9 million tons of apples are grown in India annually and the area of ​​apple orchards is estimated at 330,000 hectares. The main production is concentrated in the states of Jammu, Kashmir, Himachal Pradesh (HP), and Uttarakhand. Smaller amounts of apples are grown in the states of Arunachal Pradesh, Nagaland, Meghalaya, Manipur and Sikkim.

Misconception #3 – The weather is hot in India so apples are mainly sold in supermarkets and stores with refrigerators.

In fact, the situation is exactly the opposite. The bulk of apples are sold on layouts by street vendors. That is why if you sell apples to India, their hardness must be at the proper level even after delivery, otherwise it will simply not be sold in time. Also, this is what determines the preferences for apple varieties in this country.

Misconception #4 – Consumers in India prefer smaller apple sizes because the size of the fruit is easier to consume.

This may be true in some countries, but in India, the reason is quite different.  Apples, like other fruits, are traditionally sold in India by the piece and the price is set for one apple. Therefore, it is more profitable for the seller to buy small-sized apples since he can make more money from them. Why are apples in India sold by the piece? There are many reasons, but the main one is that not all sellers have scales and not all scales can be trusted. The quantity is a more objective indicator.

Misconception #5 – Consumers in India prefer a shiny apple so it is better to wax apples shipped to that country as US exporters do.

Many have seen apple sellers in India polish their waxed American fruit to shine to entice consumers. However, in recent years, waxed fruit is considered unnatural. Consumers have begun to pay attention to this and many importers now prefer unwaxed apples.

Misconception #6 – Mostly red apples are sold in India because they have a vibrant appearance like other exotic fruits. Therefore, consumers are not interested in green and yellow apple varieties.

This is untrue. Hindus prefer sweet fruits and they believe apples that are green and yellow in appearance cannot be as sweet as red ones. What about Golden Delicious apples, you ask? Yes, they can be very sweet, too. However, the Golden variety deteriorates very quickly in warm climates; becomes loose and not juicy. Therefore, it is usually not sold for that reason.

In fact, this apple variety in India was very popular, but it is rapidly losing its popularity. It is being replaced from the market by the Gala variety. Consumers in India do not like the grainy flesh of the Red Delicious apple as well as its clones such as the Red Chief. The more homogeneous and juicy flesh of Gala apples is more appealing to the Indian palate.

Now, that we explained some top misconceptions, let’s cover the most interesting facts about the Indian apple market:

Fact #1 – Consumers in India prefer the elongated apple. Therefore, round varieties are not very popular here.

Fact #2 – It is better to deliver apples to India from Ukraine, Poland and other countries of the region after it has been in storage for 3-4 months and not immediately after harvesting. The reason is trivial: the density of the apple after storage in the CA, ULO, DCA storage and treatment with 1-MCP remains high and its juiciness does not deteriorate, but the amount of sugars continues to grow. Therefore, the apple delivered in January-April will be sweeter than these delivered in October. For Indian importers, this is an important indicator because they value their reputation with the consumer. Another reason is described below.

Fact #3 – The season of massive apple imports by India lasts from March to July. From August to December, the volume of imports remains very low due to the presence of large volumes of India’s home-grown inexpensive apples. This season may expand in India with infrastructure development for storing its own apples and increasing the technical skill level of Indian farmers.

Fact #4 – The growth in apple consumption and imports to India in recent years is due not only to an increase in income and population but for health reasons above all else. Apples are considered a healthier fruit in India than other exotic fruits.

Fact #5 – China has not supplied any apples to India since June 2017 due to the regular detection of quarantine organisms in the supply of Chinese apples. However, the situation may change because India has already agreed to carry out additional inspections of the apple safety system from China. The two countries are in the process of negotiation.

Fact #6 – The trade war between India and the United States had a negative impact on apple supplies, but the US remained the main supplier. In the first seven months of 2019, India imported only 50,000 tons of apples from the United States, while a year earlier imports for this period reached 140,000 tons. Apple suppliers from Italy benefited from this, which increased supplies more than 15 times up to 46,000 tons. Also, apple imports to India from Poland and Turkey have grown significantly.

Andriy Yarmak, an economist at the Investment Centre of the Food and Agriculture Organization of the United Nations (FAO), believes that India can become a good market for apples from Ukraine. “The preference of Indian consumers for a juicy, hard, well-coloured and small-sized apple as well as a consolidated and well-structured apple import market in this country, represent an excellent opportunity to diversify the supply of these fruits from Ukraine. Larger apple sizes can be shipped to the EU and the Middle East, while smaller ones to India and, for example, Bangladesh. The prices for an apple that importers from India are willing to pay are very attractive for Ukrainian producers and exporters. Even when their trade disputes with the United States are resolved and the possibility of supplying apples from China to India opens up, Ukraine will have its own niche in this market because Ukrainian apples will always be preferable here in terms of taste, colour, hardness and juiciness compared to an apple from Poland,” says Andriy Yarmak.

However, Ukraine has not yet resolved access issues to the Indian apple market: “Unfortunately, our competent authorities have not yet been able to receive a response from the relevant authorities in India, despite the fact that Ukraine has long fulfilled and even exceeded the volume of trial apple supplies to this country. According to our information, the competent authorities of India did not have any complaints about the safety of Ukrainian apples, but they are in no hurry to issue a permanent permit for the imports of Ukrainian apples,” says the FAO expert.

According to Mr Yarmak’s forecasts, Ukraine will be able to supply up to 20,000 tons of apples to India annually if its production continues to grow.

Reduction in supply makes prices for onions increase in Ukraine

Mandarin price in Uzbekistan fell by 37% in a week

Kinnaur is known as the apple valley of HImachal Pradesh because Himachali apples grown here are of superior quality. Apart from providing a longer shelf life Kinnauri apples thanks to its thick skin they are also revered for being juicy and sweet.

Kayang offers its customers a wide variety of apples to choose from namely, Royal King apples, Red Delicious, Golden Apples, Granny Smith, Royal Kinnaur Supreme apples and more new varieties that are coming up in recent times in some of these best apple farms in India.