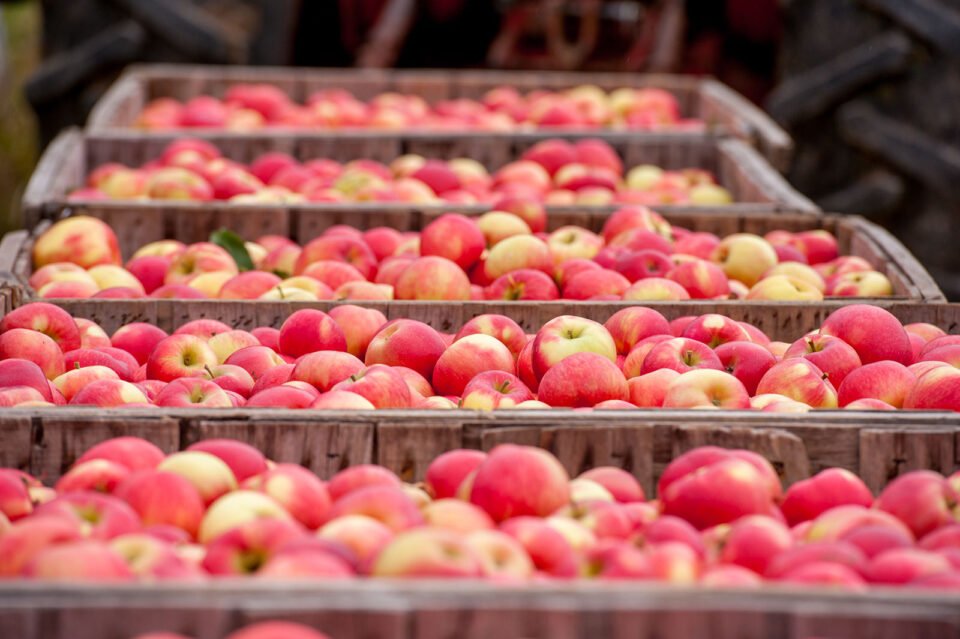 Home › News › To sell or not to sell: the apple dilemma

In this season, many apple producers and traders in the EastFruit region (Eastern Europe and Central Asia) tend to keep apples in stock amid reports of declining production in many countries. It looks like they hope to hit the jackpot by selling apples at a higher price in winter and spring.

So, is it worth keeping apples in warehouses and wait till the prices go up, or is it better to sell them now? That is the question EastFruit analytical team hears every day. Let’s try to answer this question.

First, let’s take a look at the apple prices in different countries of the region to see if they increased compared to the last year.

The most significant decline in average apple prices occurred in Tajikistan: by 44% in the US dollars. The situation is very similar in Georgia, where prices also dropped by 28% in national currency and 39% in US dollars. Prices also significantly went down in Uzbekistan. That is, the Asian part of the region, as well as the Caucasus, are better supplied with apples than last year, at least at the moment.

As for the European part, the trends differ. The situation in the Ukrainian apple market is very interesting. Prices in hryvnia practically did not change over the year, and the prices for the non-exporting apple varieties even increased. The average price in national currency for all apple varieties is 1% lower than last year. But if we take into account the devaluation of the national currency, the decrease of the real average wholesale price is already quite significant – by 13%. The decline in euros was even sharper.

Why is it important to consider prices in dollars and euros when apple producers pay their bills and receive their profits mostly in national currencies?

Because most of the expenses, like equipment or plant protection products, except for labour, are directly tied to the exchange rate. As a rule, they are imported from the eurozone countries. Revenue of the countries, exporting or importing a significant amount of apples, also directly depends on the dollar and euro currency rates. Accordingly, for most countries in the region, if the devaluation of the local currency occurs, costs will increase, while revenues, on the contrary, will fall.

In this context, Moldova, who benefits most from this year’s situation, is the glowing example of this dependence. Apple prices in Moldova are now 30% higher than a year earlier when they were already relatively high. The local currency even strengthened against the US dollar, which is positive in terms of costs and revenues. However, the apple yield in Moldova has also dropped sharply; therefore, at the moment, the income of apple growers is approximately the same as last year, taking into account the decline in production.

The situation in Poland is even better than in Moldova. In Poland, production has increased compared to last year, prices are higher by an average of 13%, the national currency has strengthened against the US dollar, and domestic and foreign demand for apples remains high.

Russia, the most important apple market in the world, as well as its satellite and the main re-exporter of the region, Belarus, find themselves in an ambiguous situation in terms of apple prices. Prices in national currencies seemed to have grown significantly, that is by 14-15%. But in US dollars, on the contrary, they fell. This article tells in detail why and how this will affect the business of Russian producers.

Let’s move on to the main question: what is more profitable, to sell the apple now or keep it longer to get a higher price?

“I’ve always said that any kind of business is the exact opposite of playing in a casino. However, in this region, people prefer gambling and risking, hoping to hit the jackpot. Very often, this leads to the opposite consequences. In my opinion, any apple business professional should know in advance where and when he or she will sell at least 75% of the future harvest. If you run an apple business and own a storage facility, your goal is to be present in a key market for 12 months a year. Therefore, it is necessary to sell systematically and continuously, distributing sales though the season and according to the strategy,” says Andrii Yarmak, an economist at the Investment department of the Food and Agriculture Organization of the United Nations (FAO). Mr Yarmak has been professionally forecasting prices for vegetables and fruits in the region for over 17 years.

“Storage is not a separate business, but an integral part of the horticultural business. I always refer to the example of the United States, where over the past 20 years apple prices on average have been lower in April than in October, during the harvest. However, producers never thought about selling the whole apple harvest at once to avoid losses. They understand that it is physically impossible, and it would crash prices. Therefore, producers and distributors systematically sell apples throughout the year,” explains Andrii Yarmak.

When storing apples, losses of both weight and quality are inevitable. Accordingly, the longer apples are stored, the less will be sold. Storing requires significant financial resources, energy and personnel costs. Also, storage means frozen funds: each kilogram of apple should be estimated by the cost of borrowed loans to cover operating capital, which will differ for each country.

In Ukraine, for example, storing one kilogram of apples, taking into account the loan rate, costs 0.15-20 UAH/kg (about 0.6 US cents) only in terms of the cost of money. In other words, the apple owner will be able to recover the storage costs and make a small profit only if apples rise in price by an average of 2 US cents every month. If the apple is stored from October to May, then its price should be 10-12 US cents higher in May than when it was stored to justify this business decision.

Will apple prices rise or fall in winter and spring 2020? Most of the market participants surveyed by EastFruit believe in a significant increase in apple prices in the second half of the 2020/21 season. However, the situation varies from country to country. For example, in Moldova, the supplies of apples are much less than a year earlier, while in Ukraine and Poland, the volume of apples has increased. In Russia, producers also harvested more apples, although they say the opposite.

It is essential not to forget about the growing supply of apples from Turkey and Iran, who are trying to conquer the Russian market. On the other hand, Serbian apple exporters are shipping more and more fruits to the markets of the EU, the Middle East, and Southeast Asia, which supports the Russian market.

Also, the pandemic and its impact on apple consumption mean considerable obscurity for the market. On the one hand, consumption in the EU has grown, but consumption in less affluent countries, where the apple is an exotic product, is questionable. The second problem is the economy and the possible devaluation of currencies, which could negatively affect global apple trade.

It is impossible to give an accurate prediction of prices in the apple market under these conditions. Rather than hoping to hit the jackpot, it is worth developing a sales strategy, like many successful apple producers did.