Home › News › First Carrefour store opened in Uzbekistan — what does this mean for the market?

International supermarket chain Carrefour opened its first store today in Uzbekistan’s capital city Tashkent. EastFruit experts explain why this event is a serious milestone for the fruit and vegetable business in Uzbekistan because this is not the first supermarket in the country.

“Carrefour is the first international brand that decided to enter the Uzbek market. Its success or failure in Uzbekistan will be an important signal to other investors and especially to the international retail business,” explains Andriy Yarmak, an economist at the Investment Centre of the Food and Agriculture Organization of the United Nations (FAO).

“Carrefour is one of the world’s ten largest retailers in the product category and is very active in emerging markets, looking to find markets that are actively growing. In this sense, Uzbekistan fits perfectly because, recently, modern trade formats have been opening very actively here. As for the fruit and vegetable business, the arrival of the first international network will increase product quality and safety standards, which will have a positive effect on the entire chain from the selection of varieties and growing technologies, to the storage, processing, sorting, packaging, and logistics of products. This, in turn, will improve the prospects for fruit and vegetable exports in Uzbekistan,” notes Andriy Yarmak.

However, EastFruit experts warn that the inevitable increase in the market power of supermarkets in Uzbekistan will create a class of large and influential buyers who can dictate prices and conditions to suppliers. Therefore, Uzbek farmers should start now to adapt to these realities in order to use them to their advantage. 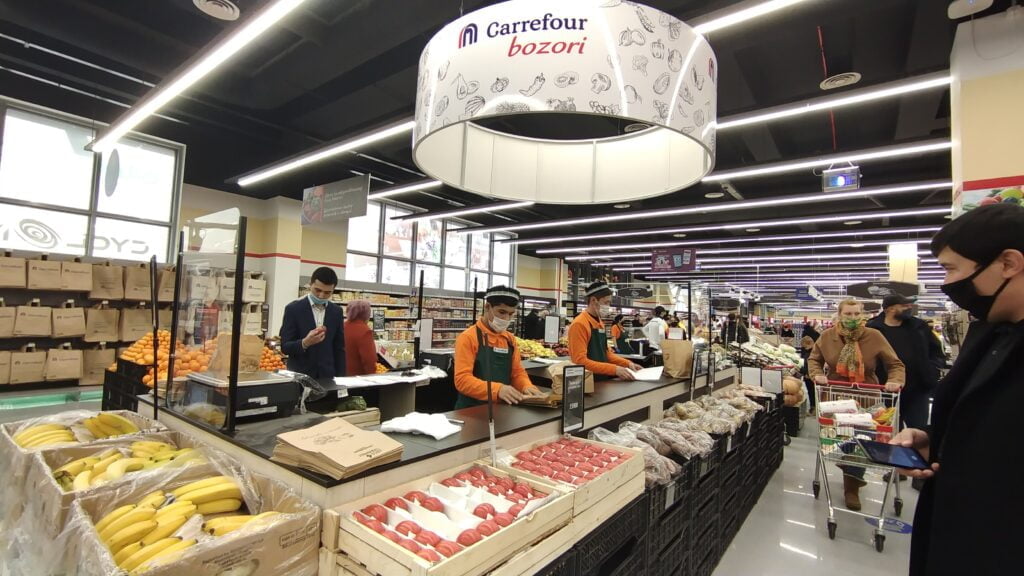 “Which supplier is of interest to supermarket chains? The one who can supply the maximum range of fruit and vegetable products and preferably all year round. However, most farmers in Uzbekistan grow either one crop or a small assortment. Not all farmers have their own storage and almost no one has their own modern revision. Now is the time for farmers to start co-operating, jointly creating storage and handling to increase their market value against the growing market power of supermarket chains and this applies even to large producers,” advises the FAO economist.

It should be noted that Majid Al Futtaim (UAE) opened Carrefour in Tashkent as part of the brand’s franchise. In general, Majid Al Futtaim operates franchised Carrefour stores in 17 countries and already has the experience, albeit negative, of working in the Central Asia region. Three years ago, the company was forced to close the Carrefour supermarkets in Kazakhstan after operating there for a year and a half. Initially, it was planned to open 15 stores throughout Kazakhstan, but in the end, the company opened only one hypermarket in Almaty and closed it under the pressure of competition from local market operators.

Majid Al Futtaim also manages the Carrefour supermarket chain in Georgia where it has consistently been one of the leaders in EastFruit retail audits in recent years. However, in November 2020, the situation in the fruit and vegetable departments of the chain in Georgia deteriorated sharply.

Also, not everything has gone smoothly with Carrefour in Uzbekistan. Originally, the first store was planned to open here much earlier in the July-September 2020 timeframe. It was planned to have four stores by the end of the year and three more in 2021. However, the coronavirus pandemic intervened and plans had to be adjusted. Taking into account the active opening of local retail chains, EBRD’s investments in the expansion of the Korzinka.uz network, and the active development of newcomers, in particular, the Green Apple network, which surpassed other chains in the rating of Tashkent fruit and vegetable departments in November 2020, Carrefour must hurry up with the implementation of its plans.

We add that Auchan and Metro Cash & Carry are the most represented in the region from other international supermarket chains, but both chains are significantly inferior to Carrefour in terms of turnover at the global level. Another network, Kaufland, operates only on the Moldovan market because it has a good position in neighbouring Romania. This chain is part of the Schwartz Group, the largest food retailer among European retailers. However, the expansion of this network to the Central Asian region has not yet been announced.

Thus, at least two new chains opened here after November 25, 2020, and they will be added to the next EastFruit retail audit in Uzbekistan. This means that in March-April, we will give the first positioning of retail supermarket chains for Uzbekistan.

The retail audit of supermarket produce departments in the EastFruit region – due to its balance, independence, and impartiality – is an excellent tool for assessing the entire retail business of a brand. In the modern world, the vast majority of consumers choose a supermarket for daily or periodic purchases precisely on the basis of the quality of the produce department.