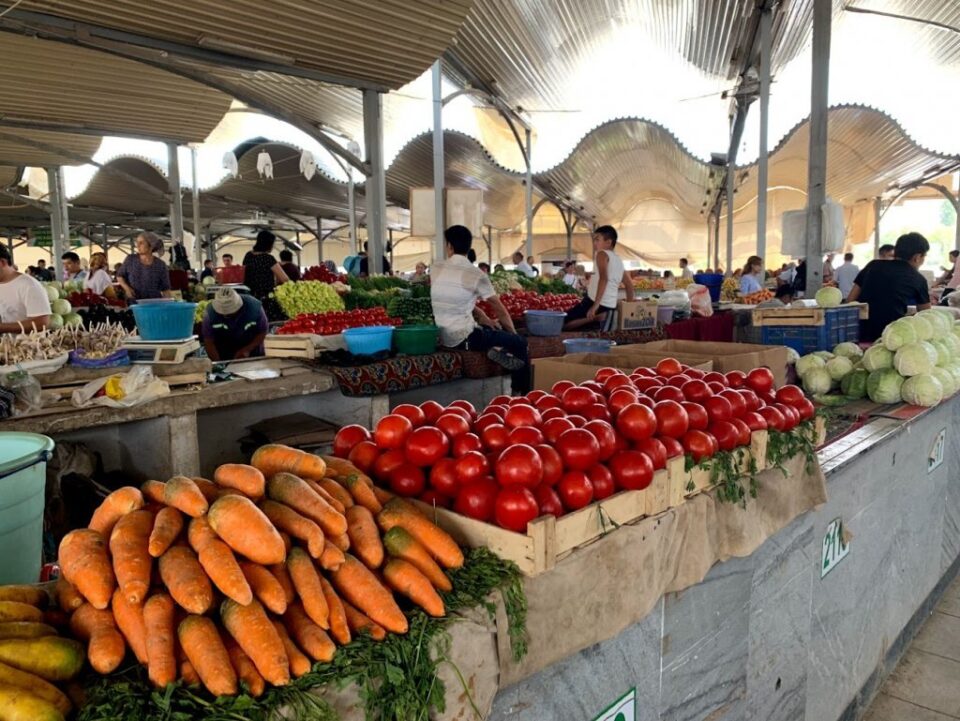 Home › News › Are prices higher for fruits and vegetables at bazaars or supermarkets in Uzbekistan? The answer will surprise!

During the next retail audit of supermarket produce departments, EastFruit analysts draw attention to the fact that many consumers in Uzbekistan believe that fruits and vegetables can be bought much cheaper at a bazaar or stall than in a supermarket. We decided to test this hypothesis and found some very unexpected pricing features that we wanted to share:

Feature 1: There are no price tags for vegetables and fruits in bazaars or stalls in Uzbekistan. For those, the price can only be obtained by asking the seller. Thus, the process of selling products here is slow compared to a supermarket so it seems that trade is going very well. After all, someone is almost always waiting for their turn to find out a price. This first feature gives the deceptive impression of high demand. Whereas in a supermarket, a person knows the price, simply takes the product and moves on.

Feature 2: This most interesting feature appeared immediately. After observing the sellers, we found that the seller often names different prices depending on who asks. Therefore, the first surprise is that there are no prices listed for produce in the bazaar or stall and then the price depends on the personality of the buyer. Let’s remind that in the supermarket the prices for the products are fixed and known by all.

Feature 3: Each seller has his or her own pricing strategy so the divergence in named prices can range from 10% to 20% or more! Thus, the same product in the same place can be relatively cheap and very expensive. One gets the impression that the seller evaluates each customer in terms of appearance and behaviour then estimates how much they can really pay. Again, there is nothing like this in the supermarket – the price is the same for everyone.

Read also: Carrefour in Uzbekistan strikes a blow to the prices of vegetables and fruits

Feature 4: This pricing feature is well known in Uzbekistan. It attracts some but repels others. It is the fact that you can bargain at the bazaar. Almost as much as those who like to bargain, others do not.

Feature 5: Sometimes products are sold on credit at stalls and in bazaars, which is an advantage over supermarkets for poor segments of the population.

Feature 6: If you seem to the seller as a person with a low-income level and you bargain well, most likely you will be able to buy local products cheaper than in a supermarket, but imported products of comparable quality are usually more expensive anyway. This is due to the fact that sellers in bazaars and stalls do not pay VAT, which gives them a significant advantage in local goods. When importing, VAT is levied immediately and, unlike traders in the bazaar, supermarkets that are VAT payers can return the input VAT so here they already have an advantage over the bazaars.

Feature 8:  This feature is the most unpleasant in the opinion of Uzbek consumers – cheating at the bazaars. Often the weighing scales are not calibrated accurately and customers are charged a heavier weight than the actual weight of the produce. Also, low-quality fruits and vegetables get placed in the bag because it is collected by the seller. Whereas in the supermarket, cheating with scales does not exist and the desired product’s quality is selected by the consumer directly.

The above features fully explain why traditional bazaars are now losing the competition to supermarkets in Uzbekistan. The wealthiest segments of the population who simply do not have time to walk around the market, wait for their turn, bargain for each product, and pay more for imported vegetables and fruits (which dominate the market in winter), will choose supermarkets and convenience stores. Yet, it is this category of customers that provides the main revenue. One high-income customer often generates more profit than 10 low-income customers. In addition, they do not need goods on credit and they are willing to pay for additional conveniences such as more comfortable shopping conditions as well as guaranteed quality awareness and lack of cheating. A demanding and wealthy customer in Uzbekistan can spend less time and less money by purchasing the necessary range of vegetables and fruits in more comfortable conditions. Also, this is without taking into account the cost of their time, which is quite expensive for working people. With an income of even 5 million soums a month (about $500), the cost of one hour is about 30,000 soums.

On the other hand, a poor customer who has plenty of free time, most likely with the right amount of luck, can save money if he wants to buy locally produced vegetables and fruits at the bazaar and not in the supermarket. The likelihood of saving on the market in winter will be lower than in summer when there are many vegetables, fruits, and potatoes grown in Uzbekistan and few imported products.