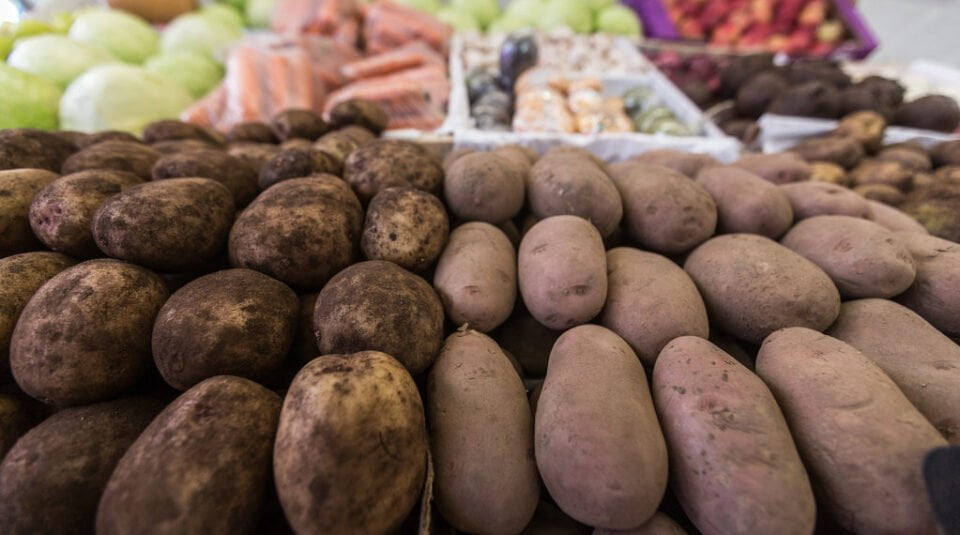 Home › Horticultural business › Blogs › 10 billion to a landfill? Why cheap dirty potatoes are expensive for consumers, farmers, and supermarkets

I was pleased that my blog about dirty potatoes as an indicator of problems in the Ukrainian potato industry has caused such a lively discussion among farmers – and not just potato growers. Although I received full support from many leading potato growers, many still remark that the Ukrainian people are not wealthy and cannot afford clean potatoes because they are supposedly more expensive. However, I claim the reality is the exact opposite – clean, including washed,  potatoes cost much less for all market participants than dirty ones. For the consumer, clean potatoes are cheaper than dirty ones.

I will try to show this in numbers.

First, let’s start with consumers. Because of dirty potatoes, consumers in the supermarket buy…yes, soil or dirt.

How much soil do we buy with dirty potatoes and veggies? Estimates vary widely, but on average, about 5% of the purchase weight for vegetables is dirt or soil. Considering that annually in Ukraine slightly more than 1 million tons of potatoes for consumption are sold for money (estimates of Fruit-Inform analysts), then every year our society sends 50,000 tons of fertile agricultural soil to the cities…and then to garbage dumps.

Let’s take the average retail price for dirty potatoes today, which is about 9 UAH/kg (US $0.32). Of this price consumer paid 0.50 UAH for dirt!

Dirty potatoes have flaws that we cannot see due to the dirt: mechanical damage, diseases, irregularities, etc. As a result, after washing it, you have to remove the damage. Here, too, everything depends on luck, but the average percentage of losses of the actual weight of the potato after removing all defects will be close to 15%. So, after washing and finishing our kilogram of potatoes, we have only 800 grams left. Hence, for dirt and defects, the consumer paid 1.8 UAH/kg (US $0.06) and immediately threw this money into the trash can.

In the end, 1 kg of dirty potatoes costs the consumer 18.2 UAH/kg  (US $0.64) at a nominal price of 9 UAH/kg, which means dirty potatoes actually cost the consumer twice as much as the clean ones. Having paid 9 UAH/kg for dirty potatoes, we will additionally pay 9.2 UAH in our own time and waste and then to throw the 9.2 UAH in the trash! This is using the most conservative estimates. In reality, the difference will be even more significant. 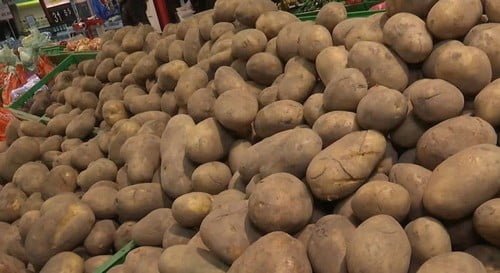 Consumer losses throughout the country (if we assume that we sell slightly above 1 million tons of potatoes per year) would amount to an incredible UAH 10 billion (US $350m)! And that is not even taking into account the additional consumer costs for health care and losses due to temporary disability from poisoning associated when using dirty vegetables and dirty potatoes?!

Recall the Ukrainian proverb about why people are poor? In this scenario, yes, the Ukrainian consumer simply cannot afford to buy dirty potatoes because the (personal) costs are too high!

Second, let’s switch from consumers and talk about those that grow potatoes – the farmers. Again, in my blog, I explained that the focus while growing potatoes has been on the production of raw materials (i.e., dirty potatoes without processing), which makes this product completely restricted from exports because such potatoes can be sold only on the domestic market. What does this lead to? This leads to the fact that even the slightest overproduction of potatoes lowers the price of potatoes and it becomes almost impossible to sell them. Some potatoes are then disposed of and some are sold at a price that does not cover production costs. In Ukraine, there were several such years in a row before the country began to massively import potatoes.

In such years, a farmer on average lost about 1 UAH on each kilogram of potatoes grown. However, a farmer with an export product can find an alternative to the local market and sell in the local market, as a rule, for a profit.

EastFruit researched the possibilities of supplying washed potatoes and carrots from Ukraine to the UAE, where a lot of these goods from the United States and Australia are already on their shelves. It is quite realistic, promising, and profitable and this is just one example. There are many more possibilities.

However, my focus in this blog is not about those opportunities, but about the losses to a farmer who does not have clean high-quality potatoes in the range. On 100 hectares, such a farmer’s losses would amount to UAH 3 million in a bad year (US $110,000). This is money that could improve the quality of products or install washing equipment. But no, farmers in most cases prefer to dispose of potatoes in landfills. I will not even begin to count how much money everyone spends on transporting dirt and garbage, which the consumer then, at the expense of his time and money, will put into the trash can. This garbage, by the way, will then also need to be removed and disposed of and this is a terrible, non-ecological solution for the country.

Even if we assume that there will be only three such unprofitable seasons in a ten-year span (when in fact it would be more), then the losses for the entire industry with the sale of around 1 million tons per year will be from UAH 350 to 450 million (US $12-16m). How many potato growers are asking for subsidies from the state or, we should say, from taxes paid by consumers who already lost 10 billion UAH on dirty potatoes?! 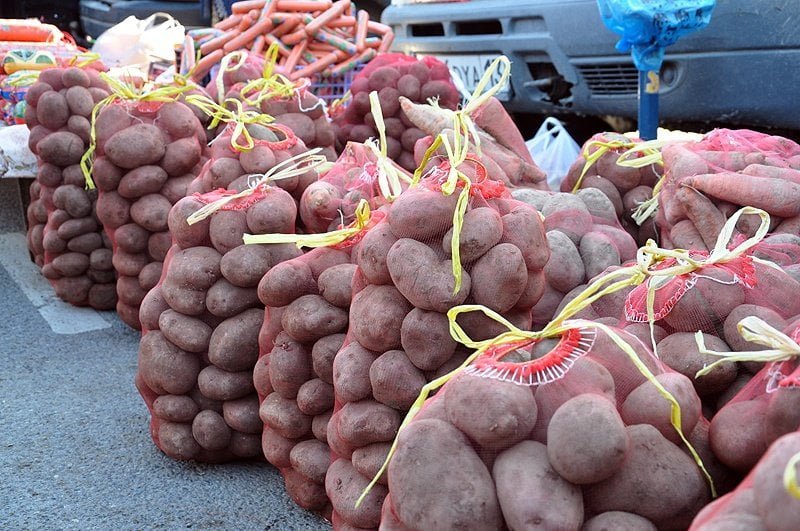 Finally, let’s discuss those who lose the most on dirty potatoes – supermarket chains in Ukraine. EastFruit analysts have been writing about this issue for a long time in our retail audits (retail audits also available in Russian).

According to the study “Surprises in Store: Fruit Logistica Trend Report 2019” by Oliver Wyman which was based on a representative survey of consumers in 14 countries (mainly EU countries, Canada, United States, and Russia), supermarket chains with high-quality fruit and vegetable departments receive on average 45% more revenue per square meter than supermarket chains with low-quality departments.

I will not count the additional labour costs when operating a supermarket chain with dirty potatoes and vegetables even though they are also very significant for additional tasks of washing, partitions, sorting, waste disposal and are direct losses. For this example, I’ll just factor the difference in sales since it is impossible to name a quality department with dirty vegetables and potatoes. Such shops literally push shoppers out the door, who are forced to look for other stores with quality washed products or go to the bazaar. In all bazaars, by the way, potatoes are more expensive than in the store because they are clean and of high quality!

Let’s assume for the purity’s sake in this experiment that for Ukraine, accustomed to these unpleasant images in stores, the difference in sales will not be 45%, but half as much – say 22.5% (although our preliminary estimates show that this difference could even be higher than 45%, but we will take it to a minimum). The annual retail turnover in Ukraine in 2020 is estimated at UAH 800 billion (US $28.3b). According to rough estimates, self-service chain stores that have a produce department, and therefore sell potatoes, account for at least half of the turnover, or about UAH 400 billion (US $14.1b). 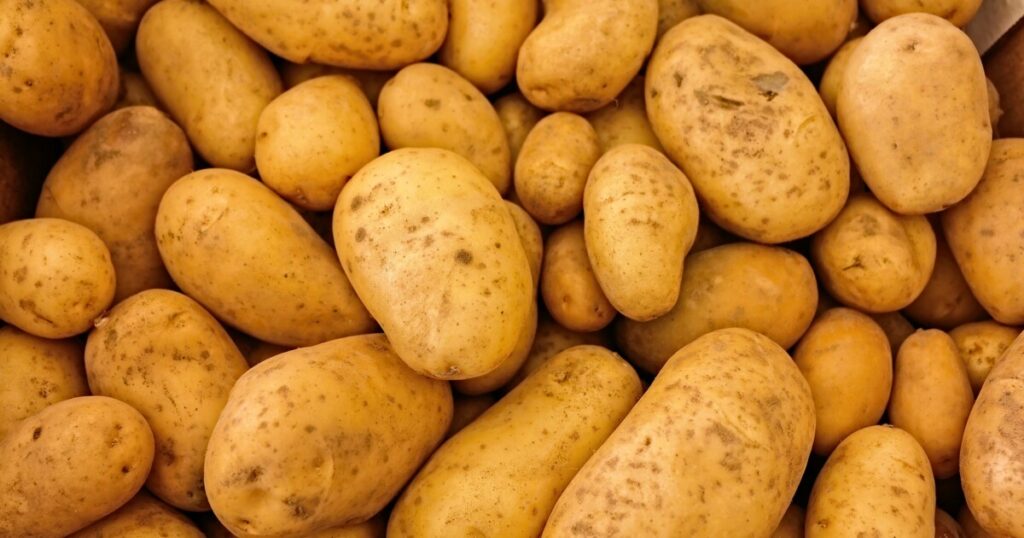 The conclusions are obvious – dirty potatoes and dirty vegetables are a huge blemish on the development of the horticulture sector in Ukraine. These are colossal losses for the entire country. This is a huge loss for already poor consumers and an annual waste of tens of billions of hryvnia that could be reinvested in the development of the industry.

Let this blog not become another sensation because many countries have already gone this way. I saw this transformation in Poland. I saw this transformation even in Russia where the majority of chains abandoned dirty vegetables and potatoes about 10 years ago. This, too, will happen in Ukraine and the sooner, the better to ensure that billions of honestly earned money by Ukrainians will not go to the landfill.

There is an environmental impact too in diesel cost for transporting dirt, and the amount of water used by the end consumer in ultimately cleaning the product. If this was done at source / by farmer, then the water can be reused and transportation cost lowered.