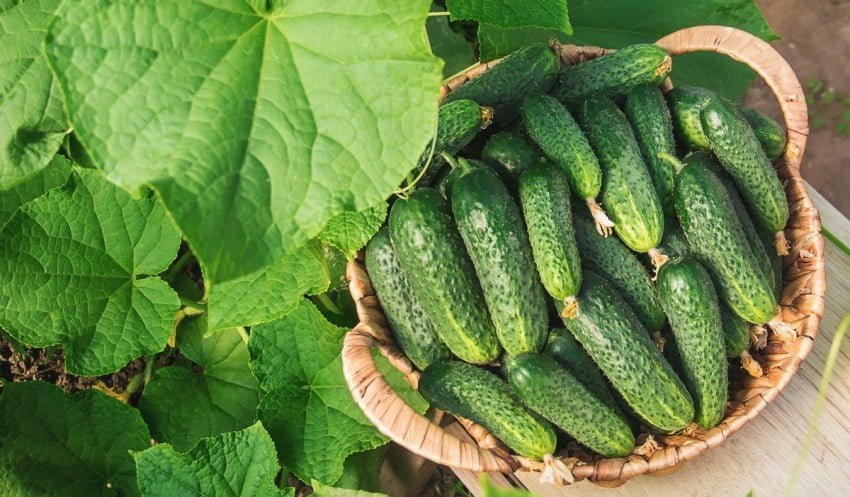 Although April started well for Georgian cucumber growers, average wholesale prices for greenhouse cucumbers (with bumps) fell 4 four times in May. This is not a typical situation, as prices are significantly lower compared to the same period last year.

What factors influenced prices this season? 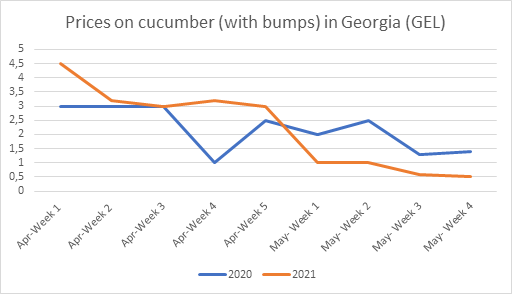 As a rule, prices for cucumbers in Georgia reach their minimum in July, when open field cucumbers are actively sold on the market. Last year, prices began to fall in the first week of June and hit their lowest in early July. The minimum average price of pimple cucumber last year at the end of May was 0.3 GEL/ kg ($ 0.1). However, this year the price decline started in the first week of May, which is unusual.

Weekly price monitoring by EastFruit shows that if in April of this year the average price for a cucumber(with spines) was 3 GEL / kg ($ 0.9), then in May the average price was already below 1 GEL ($ 0.3) – the price decreased by about 3 times. Compared to May last year, this year prices are 132% lower.

Last year, farmers from Kvemo Kartli faced difficulties in selling cucumbers due to a pandemic, when the region was quarantined and farmers were unable to transport the product for sale in the capital’s market. Last year was not the best for Kakhetian producers, as the spring harvest of pimpled cucumbers was small due to bad weather and plant diseases.

Geronti Sivsivadze, spokesman for the regional office of the Ministry of Environment and Agriculture in Kvemo Kartli, told EastFruit that last year despite a poor start to the season, Kvemo Kartli farmers got good prices for cucumbers and decided to grow more cucumbers this this year.

“Today almost every family in Kvemo Kartli, Marneuli municipality has a greenhouse and grows cucumbers. Relatively high prices last year were provided by the support of the state in the sale of the harvest during quarantine, as well as crop failure in Kakheti. In the same season, the production of cucumbers increased with the hope of high profits but the excess supply puts pressure on prices, ”said Geronti Sivsivadze.

Farmers themselves also note an excess of supply, Abaz Musayev, from  Kvemo Kartli, in a conversation with EastFruit said that last year, despite the problems caused by the pandemic, for cucumber producers was profitable, so this year the production of cucumbers in region has increased

According to the representative of the regional department of the Ministry of Environment and Agriculture in Kakheti Vasily Germanishvili, last year there were serious problems with the cucumber harvest in Kakheti due to weather and widespread diseases in greenhouses, but this year the harvest is good. According to farmers from the Lagodekhi municipality in Kakheti (160 km to Tbilisi), the price of cucumbers “from the field” is now 0.2–0.3 GEL/ kg ($ 0.06- $ 0.1). The buyers are mainly intermediaries who work with chain supermarkets.