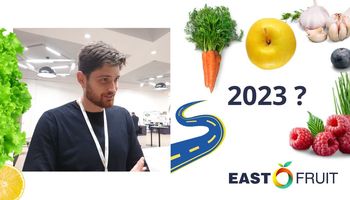 According to the expert, 2022 should be divided into seasons to understand the situation. It is also better to analyze each crop separately.

“Spring was, to put it mildly, unpredictable, and difficult. Fortunately, perennial plantings of berries and fruits were planted much earlier. It immediately became clear that no one would plant new plantations in spring because of the extremely unstable situation. Producers faced a shortage of fertilizers, chemicals, and packaging. Despite everything, the problems were quickly resolved,” says Taras Bashtannyk, describing the situation in the fruit and berry market.

Speaking about the vegetable growing industry, the UHA President noted that Ukraine has lost a large area of vegetable crops. In addition, a lot of products remained in the refrigerators due to the rapid occupation of the South of Ukraine.

“This caused the dominance of imported borsch vegetables on the Ukrainian market in spring and part of summer. Imports dominated until local vegetables grew in the non-occupied regions. All the above has led to a significant increase in the cost of the borsch set compared to 2021 and 2020. The largest price records were set by onions and carrots,” notes Taras Bashtannyk.

Primarily, berries are grown in summer. To conduct a qualitative analysis, the specialist divided them into main positions.

“There were fewer offers on the fresh market, as again there were no products from the South. But the demand was less. Many have left the country. In addition, purchasing power has fallen significantly. But there were enough products for the fresh market. It always consumes a certain volume of berries, and what it cannot consume is frozen and processed,” says the President of the UHA.

Given the lack of a large volume of fresh berries, the price of strawberries was not low. This led to the fact that strawberries were not frozen. According to the expert, Ukraine did not export or process many strawberries this year, but the demand for the fresh market has been satisfied.

«In terms of price, strawberries this year were 40-45% more expensive than last year. Generally, the season for strawberry producers, farming in the territory controlled by Ukraine, was not bad. Those who worked “on the other side” had problems. I talked to colleagues that have plantations in the occupied regions – they harvested and sold. The harvest went to the Crimea, possibly further. They sold it for a pittance – 20 UAH/kg of strawberries, which is below or close to cost. The average price for strawberries in Ukraine this year was 50 UAH/kg,” says Taras Bashtannyk.

Traditionally, this crop is grown in the North, West, and partly in the Center. It is not grown in the South and East. Therefore, the occupation of the territories did not affect the blueberry balance in any way.

“Blueberry harvest was very high this year – 30-40% higher than forecasts. This was bad, too – there were a lot of blueberries, and there were much fewer consumer markets. There are no resorts where blueberries were sold before. In addition, many wealthy people went abroad, and blueberries couldn’t – the logistics were very expensive and long because of the queues. And blueberries are such a perishable commodity,” the specialist notes.

He noted that blueberries were still exported, but the exports remained at the last year’s level. The current production volumes were higher than last year, but not consumption.

“All this was the reason that there were a lot of blueberries on the market this year. There is nothing surprising. Blueberries have become a popular mass berry and the final price of 50-60 UAH/kg is the future of the coming years,” said Taras Bashtannyk.

There weren’t many cherries this year. The main market player, Melitopol, could not sell products in Ukraine due to temporary occupation.

“There is a paradox. Other regions that grew cherries, Vynnytsia and Chernivtsi, did not even make up the price of cherries this year. I still haven’t found an answer as to why this happened. There were few cherries this year, and the quality wasn’t bad. I attribute this to the fact that cherries were harvested a little later this year when there were blueberries, raspberries, and strawberries on the market. Therefore, there didn’t seem to be a lot of cherries, but the prices were low,” adds Taras Bashtannyk.

The Ukrainian domestic market for raspberries, both fresh and frozen, is small. Therefore, the lion’s share of these berries is exported.

“Those who grew summer varieties of raspberries and harvested them in July-August sold them quite profitably. There were very high prices in international markets, primarily European. They were caused by considerable, including artificial, rush on the part of Serbia. Therefore, summer raspberries were really expensive. However, most raspberries in Ukraine are autumn, and remontant. They are harvested from mid-August to September. These raspberries were so cheap that the Serbs still cannot sell anything. The raspberry harvest in Ukraine was not bad and a lot of berries were frozen. However, the share of poor-quality raspberries was also considerable. Why? Because it rained all the time in September,” says Taras Bashtannyk.

He emphasized that power outages started in Ukraine in October, and domestic producers began to quickly export frozen raspberries, despite the price.

“The Poles looked at low prices and decided to buy. There was one week a month ago, when raspberries of a certain quality cost 2.80 EUR/kg, and at the end of the week the price was 2.10 EUR/kg. The price fell by 30% in a week! Such a trend is a rarity,” said the President of the UHA.

There are still quite a lot of remnants of frozen raspberries in Ukraine. Europe is not in a hurry to buy them, as they hope that prices will still drop.

“As for frozen raspberries, there is another factor. A slack is expected in the frozen berry market soon due to the approaching Christmas and New Year. Therefore, the market will freeze for at least 1.5 months. And this does not make it easier for Ukrainians – there is nowhere to sell the leftovers. It seems to me that it won’t get better with electricity in the coming months,” adds the expert.

As Taras Bashtannyk noted, overproduction has been a problem in the apple market in Ukraine for three years now. There are a lot of apples that do not meet export requirements. In addition, Ukraine has successfully developed exports to the East and Asia in recent years. Now they are mostly unavailable, as maritime logistics was used. Consequently, there is a lack of a sales market for apples.

“In addition, Ukraine has a competitor with cheap quality apples – Moldova. It was “banned” – it has no right to deliver to Russia. Thus, the situation with apples is not happy now. It won’t be fun anymore. Many producers uproot orchards, and some apples were never picked,” says the UHA President.

As for processing, there have been long queues. Besides, processors are not in a hurry to do apple concentrate.

“Ukrainian concentrate is of good quality, but it is not cheap. Today, one should also take into account expensive logistics. The fact is that the same transport that delivers apple concentrate delivers both oil and fuels and lubricants. The demand and price for them are so high that it is not even worth comparing to the concentrate. To date, logistics have become three times more expensive. So, the cheaper the product, the less profitable it is to transport it,” adds Taras Bashtannyk.

This year has been very difficult for fruit and vegetable producers. Several companies involved in the processing of berries did not work this year for a number of reasons. Unfortunately, some farms in the regions with active hostilities were destroyed due to shelling.

“The planted area has not been reduced this year, but, obviously, no one has planted anything new. The dynamics of area increase is 4-5 times less than last year. This is quite logical – the country is at war. Orchards and plantations are perennial plantations, they are not grain crops that are sown for a year or two. In addition, few of the investors today are doing well with business. Investment funds are sorely lacking. The fact is that many grain companies plant berries, but the situation in the grain business today is very bad. What kind of investments can we talk about here?” concludes Taras Bashtannyk.

The UHA President is convinced that future developments in agribusiness will depend on the course of the war. If it ends quickly, it will be easier for farmers. If not, the situation will resemble this year.

“Apple business will be harsh, but on the contrary, everything will be fine with raspberries. The situation with blueberries will depend on the future harvest. As for vegetables, I believe that they will become cheaper next year since their supply will increase. We are talking about a new crop. Few enterprises could quickly reorient themselves and plant vegetables this spring. There will be more of them next year,” the specialist noted.

Taras Bashtannyk believes that there will be no problems with seeds in the new season either. Ukraine annually consumes a specific amount of seed material, and this will not change. Only a part of the seeds, which previously went to the south of Ukraine, will now be sent to another place.

The specialist also forecasted the situation in the berry market.

“The prices for strawberries will be quite high next year, pretty much the same as this year. But blueberry prices will drop. They will not be higher than in 2022, and possibly even lower. Prices for raspberries will be the same as they are now – perhaps they will drop a little, but not much. The price of berries and fruits should be expected about the same as this year, and only vegetables will be cheaper. I’m sure that there will be lots of carrots and onions in Ukraine next year. After all, these vegetables set their own price records in 2022,” says Taras Bashtannyk.