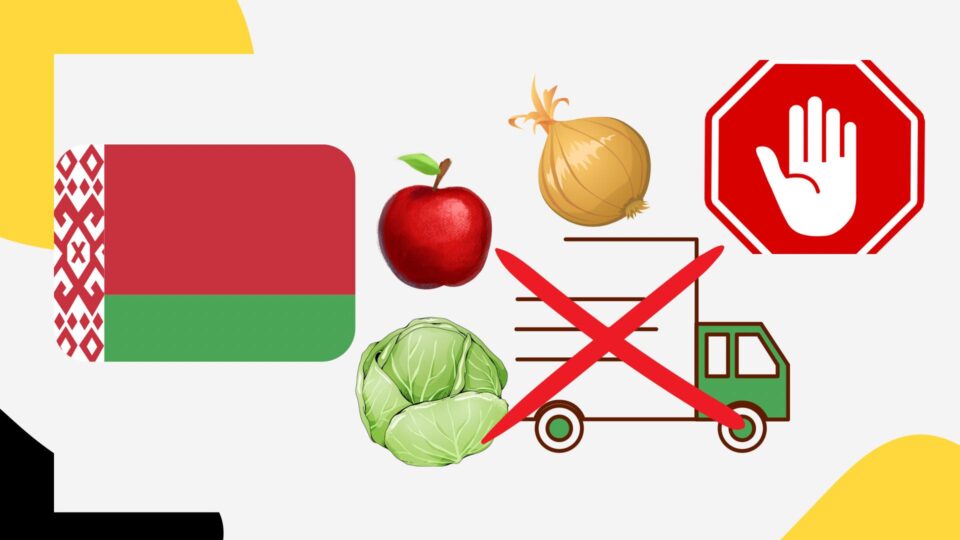 The state authorities of Belarus continue to disrupt the fruit market causing huge losses for its participants, consumers and the state budget, as EastFruit experts recently showed in their article. The new resolution of the Government of the Republic of Belarus came unexpected to all market participants, since officials kept stating that there were enough fruits and vegetables on the market and there was no cause for concern.

However, on February 5, 2022, EastFruit experts learned that the competent authorities stopped issuing certificates for the export of apples, cabbage and onions from Belarus, even when delivered to Russia. But it is to Russia that almost the entire volume of apples, cabbage and onions from Belarus is exported. Moreover, it is not a secret for traders that not all of these vegetables are grown in Belarus, despite the fact that re-export from Belarus to the Russian Federation has become complicated in recent years.

Alexandra Isayeva, press secretary of the Prime Minister of the Republic of Belarus, posted the following message on her Facebook page.

“As for licensing the export of some goods. The corresponding decision was adopted by the Resolution of the Council of Ministers of the Republic of Belarus dated February 4, 2022 No. 70.

In the above-mentioned decision:

– onions, cabbage and apples, regardless of the country of origin, outside the Republic of Belarus are exported under one-time licenses issued by the Ministry of Antimonopoly Regulation and Trade in agreement with the regional executive committees (Minsk City Executive Committee);

– one-time licenses are issued in the manner similar to that established by the Rules for issuing licenses and permits for the exports and (or) imports of goods, provided for in the annex to the Protocol on non-tariff regulation measures for third countries (Annex No. 7 to the Treaty on the Eurasian Economic Union dated May 29, 2014).

The State Institution “Main State Inspectorate for Seed Production, Quarantine and Plant Protection” and its territorial organizations in the regions issue phytosanitary certificates for onions, cabbage and apples exported outside the Republic of Belarus provided there is a one-time license for their export.

The regulation does not apply to goods:

– exported to the member states of the EAEU, as well as to states not members of the EAEU to provide international humanitarian assistance to foreign states pursuant to decisions of the Government of the Republic of Belarus, as well as supplies;

– transported within the framework of international transit traffic, starting and ending outside the customs territory of the EAEU;

– transported within the framework of international transit traffic, starting outside the customs territory of the EAEU and ending in a member state of the EAEU.

The Decree comes into force from the date of its publication and is valid for three months.”

It should be noted that the resolution has not yet been published, so it is difficult to say when it comes into force. Nevertheless, traders say that it is impossible to obtain documents for export now. So, the export has already been stopped.

This is very bad news for growers in Ukraine. After all, the unexpected embargo of Belarus on the imports of fruits and vegetables from the EU and a number of other countries, which did not include Ukraine, was the main positive news of the season for Ukrainian growers. This has led to a sharp increase in demand for Ukrainian apples that replaced apples from Poland and other EU countries in the Belarusian market, and probably in the Russian market. After the ban on the supply of apples to Russia from Belarus, the demand for Ukrainian apples may slightly decrease. However, they will remain demanded, since Belarus does not produce enough apples to meet the needs of its domestic market.

Even more unpleasant news for Ukrainian vegetable growers and traders will be a ban on the exports of cabbage from Belarus. Indeed, mainly due to the export of Ukrainian cabbage to Belarus, with its subsequent resale to Russia, prices in the domestic market of Ukraine were so high.

It is not entirely clear why the government of Belarus would ban the exports of onions. The fact is that prices for onions in Belarus are currently 50%  higher than in Russia. Therefore, no one exports them anyway. Moreover, Belarus imports onions from other countries, including Russia. Onion is the only commodity for which prices have not changed over the year in Russia. Their growth in Belarus was not so significant even in Belarusian rubles. However, this part of the resolution will not have any large impact on the market.

Will Belarus change something with this ban? Will the prices for apples, cabbage and onions decrease as a result of these unpopular actions? Experts think they will not. “In most cases, such a brutal intervention in the market as an export ban leads to the opposite result compared to what is desired in the long term,” says Andriy Yarmak, economist at the Investment Centre of the Food and Agriculture Organization of the United Nations (FAO).

“If a country produces more products than is required in the domestic market, then an export ban can indeed lead to a short-term collapse in prices and losses for producers. They will react with a decrease in production in the next cycle, and it is possible that production will become insufficient to cover the deficit in the country’s domestic market and prices will rise even more in the next season. However, Belarus provides even the domestic market with high-quality apples and onions, and their imports annually exceed their exports. Thus, the ban on exports of onions and apples will not change anything in this case, but it will harm trade and reduce state budget revenues. Provided that stocks remain sufficient, cabbage prices may temporarily stabilize, especially since early cabbage of the new harvest from Uzbekistan and Tajikistan may become available on the Belarusian market soon. Therefore, such a decision is also unlikely to significantly reduce prices, but it may cause damage to producers and trade. Nonetheless, in recent years Belarus imported more cabbage than it sold for exports,” the expert notes.

Recall that the harvest of vegetables and potatoes in Belarus in 2021 was much lower than expected, which led to a sharp increase in prices for most vegetables of borsch set. Cabbage and potatoes rose in price most of all. Moreover, the country began to import potatoes even during harvesting. Since then, the government has unsuccessfully tried to contain the rise in prices for borsch vegetables, using the methods of manual market control.