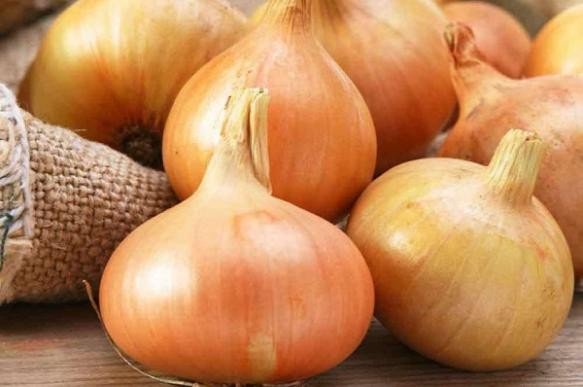 Home › News › Will onion prices go up in Ukraine?

Local growers are satisfied with current prices for onions in Ukraine: according to price monitoring data by EastFruit, onion prices on the Ukrainian market are now almost three times higher than last year, and a third higher than in 2019.

Large growers of vegetables have severely limited their sales since the beginning of autumn and keep onions in storage in the hope of a bigger rise in prices in the second half of the season. As a result, mainly onions from smaller farms with unequipped storage facilities or unsuitable for long-term storage are available on the market now.

How justified are such hopes, and when can we expect a rise in the price of onions in Ukraine?

“A record starting price of at least the last five to six years in Ukraine was noted at the beginning of autumn this year. Nevertheless, its further growth was very slow, and the current highest price in the country is $0.37/kg – this is the level when onions from Kazakhstan begin to enter the Ukrainian market,” Ievgen Kuzin, head of international projects Fruit-Inform.com comments on the situation. 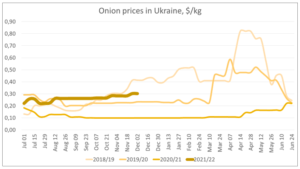 The decline in onion production in Ukraine and problems with the harvest quality due to weather this year inspired optimism for those who stored high-quality onions. From the end of summer, rumors about a high probability of repeating the developments of the 2018/2019 season started spreading on the Ukrainian market. From autumn to mid-spring the price of onion in Ukraine jumped more than fivefold then! Nevertheless, it does not mean this will happen the exact way it did then.

“According to our estimates, the situation on the Ukrainian market will not develop similarly to the 2018/19 season. Firstly, according to the Fruit-Inform.com project, although the production of onion in Ukraine this year will be one of the lowest in the past few years, it will still exceed the volume of 2018. Secondly, the market conditions in neighboring countries are completely different now: for example, onion production is not so high in Central Asia, while the harvest in the EU will be a record one. Thirdly, if the quality of the harvested crop in Ukraine will allow us to preserve the total volume until spring, one should not exclude the likelihood of a sharp increase in the supply after the opening of storage facilities” continues Ievgen Kuzin. 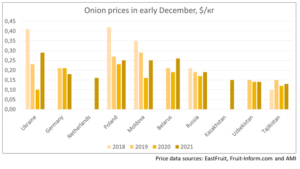 Recall that onion imports from Central Asian countries in 2018 began to play a key role in the markets of many more Western countries since the middle of autumn, and by spring the demand for their onions became booming in both Eastern and Western Europe.

Now there are only small batches of onions from Kazakhstan in Ukraine, but their availability already limits the rise in prices for local onions. For example, in Tajikistan, the current average price is one third higher than in early December 2018 due to a decrease in local production. A similar situation seems to be developing in Uzbekistan, where the harvest is also relatively low, according to local players.

“On one hand, the production of onion in Tajikistan and Uzbekistan in the current season is relatively low, which reduces the volume of possible supplies of Central Asian onions to the Ukrainian market. On the other hand, this region is not limited only to these two countries, and Kazakhstan is now actively supplying the markets of the Russian Federation, Belarus and, so far, to a lesser extent, Ukraine.” comments Ievgen Kuzin.

Moving west, we note that in Russia, Moldova and Ukraine itself, prices do not yet reach the level of 2018, and in Poland they are now 40% lower than at the beginning of December of the 2018/19 season! In addition, EU onion production this year will be one third higher than in 2018, according to estimates by the analytical agency AMI.

“In our opinion, the main difference between the current season of onion in Ukraine and that in 2018/19 may be a shift in the activity of Ukrainian imports from east to west. According to our colleagues from AMI, onion production in the EU in 2021 will be the highest since at least 2015, which is confirmed by the current three-year minimum prices in Germany. The surplus of onions grown in the EU will need to be exported somewhere, and Ukraine may be a good option for them, since it will not require the expensive sea logistics for supplies. For example, the current average price for sorted yellow onions in the Netherlands is quite comparable to the producer price in Kazakhstan and 45% lower than in Ukraine. Thus, the situation on the Ukrainian market in the second half of the season may depend on the level of onion prices in the EU, provided that the supply of local onions is greatly reduced.” Ievgen Kuzin sums up.