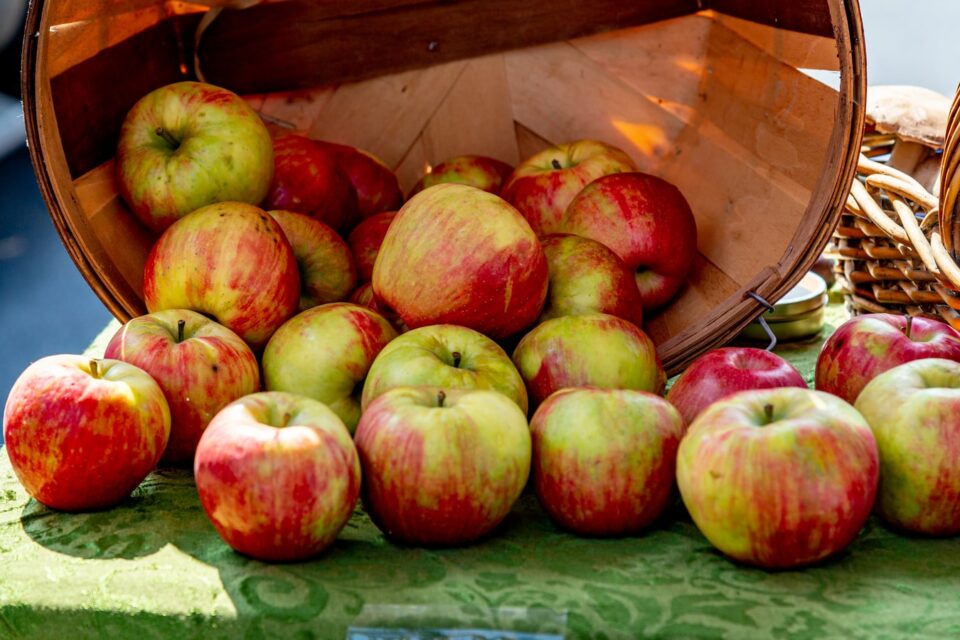 Home › News › Why have apple prices increased in Russia but decreased in Moldova this season?

EastFruit analysts want to draw your attention to a very atypical situation. Wholesale prices for apples in Russia in the 2020/21 season increased in relation to the last season. On the contrary, in Moldova, which also sharply reduced the volume of production, apple prices fell. However, Moldova exports almost all of its apples to the Russian market so the prices for apples in Moldova should directly depend on prices in Russia.

Let’s start with the facts. First fact – the 2020 apple harvest in Moldova decreased due to drought and other factors by about a third from 600,000 tons to 450,000 tons according to various estimates. The difference between 150,000 tons is almost 70% of the apple exports from Moldova. It would seem that prices should definitely rise.

However, now we have a second fact – the average wholesale price for apples in Moldova decreased in September 2020 – March 2021 by 29% in US dollars compared to the same period last year according to the EastFruit retail price monitoring data. The reason is not in the rate of the Moldovan currency – it strengthened during this period – so the real decline in the average price was even more significant. Today, the average selling price for all apple varieties this season in Moldova is $0.55/kg. A year earlier for the same period, the average price for apples was $0.77/kg.

Russia has repeatedly reported losses in its apple harvest due to frosts. Yet, EastFruit analysts believe that there was no decline since losses were compensated by the entry of fruiting young orchards. Nevertheless, we have the third fact – the prices for apples in Russia have grown by 41% at once in dollars compared to last season despite the devaluation of the Russian ruble! 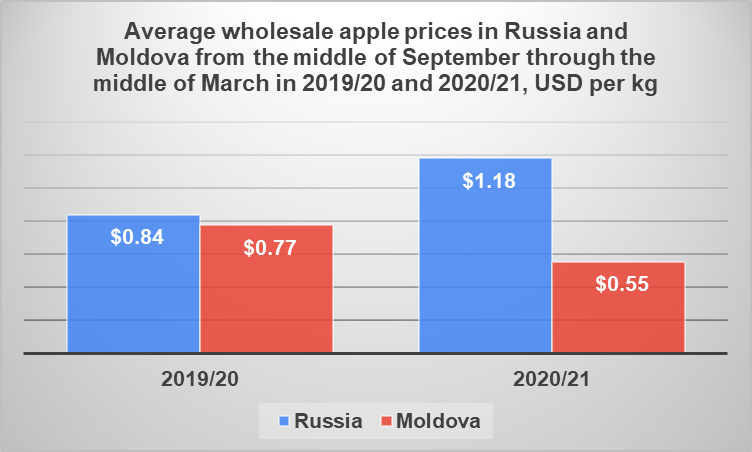 If apple prices in Russia have increased, why does Moldova, which has harvested fewer apples, have problems selling its apple at least at the same price as a year earlier? After all, the price difference has grown, which means that the profitability of supplies should also increase.

Another interesting fourth fact – wholesale prices for apples in Russia have decreased by 9% from October 1 to the present day while in Moldova they have remained unchanged over the same period. It is interesting that for the second year in a row, Moldova expects an increase in apple prices in Russia in the spring, but this is not happening. Moreover, last year the prices for apples in Russia in the second half of March were lower and also by 9% than on October 1 of the previous year! In other words, it is most profitable to sell an apple to Russia without waiting for spring because prices usually start to decline in March as shown in the chart below. 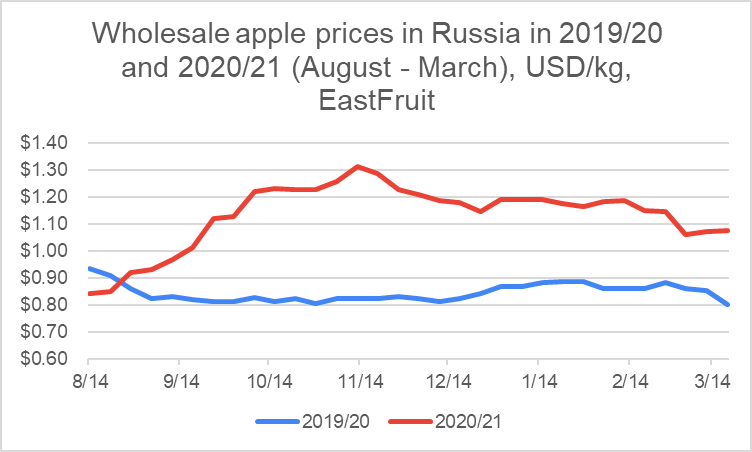 What is the reason for this? First, many storage facilities have been built in Russia in recent years and new orchards have been planted. Accordingly, the amount of apples stored in Russia is growing every year.

Russian growers believe they can earn more by selling apples in the spring given their past experiences. It has always been that way. Accordingly, apple sales are held back until March. When everyone opens their storage facilities in March, the supply of apples on the market begins to grow to put pressure on prices. The same approach is used by many exporters in Moldova.

Second, the quality of apples in Russia is a factor. In March, a lot of apples appear on the market in Russia, which begins to lose their quality. This puts pressure on the prices of quality apples.

Third, let’s not forget about the Southern Hemisphere as a factor. Apples from Chile, South Africa, Argentina, and New Zealand appear on the Russian market in March. This volume of apples is growing because it has high-quality parameters and actively occupies a niche in the premium segment. Apples from these countries are successfully supplied to Russia even after the start of harvesting in Russia. The last consignments of apples from fruit storage of the Southern Hemisphere counties arrive on the Russian market in October.

The best period for selling Moldovan apples now falls on the period from October to February. However, during this period, the volume of apples from Moldova has been constantly decreasing in the last two seasons. In the 2018/19 season, 127,000 tons of apples were exported to Russia from October to February. Last season, only 94,000 tons exported and this season less than 50,000 tons. The volume of export shipments decreased by two and a half times.

Finally, the growth of competition in the Russian market from rather unexpected competitors has become a factor. We have already written about Iran’s breakthrough into the Russian fruit and vegetable market. In our EastFruit Trade Platform, the number of suppliers of fruits and vegetables from Iran is growing faster than the number of participants from other countries. Apples for Iran is one of the main exports for deliveries to Russia. The main volumes of Iranian apples enter the Russian market from October to December. At this time, Iranian suppliers are shipping up to 50,000 tons of apples to Russia. However, apples being supplied from Iran also tend to decline this season.

EastFruit also notes an increase in apple exports to Russia from Turkey and Belarus. This season, the growth factor of apple supplies from Georgia has also been added.

Based on the facts described above, we conclude that the success in the Russian market comes to those suppliers who supply high-quality apples. These apples sell well despite their high price (Chile, South Africa are prime examples).

The second conclusion is that the seasonality of the apple market in Russia has changed forever. Now, the prices for apples will not necessarily grow at all during storage, but fluctuations continue to smooth out. This means that apple suppliers from Moldova should try to work systematically and rhythmically. Moldova should not try to wait for higher prices by holding onto apples.

The third conclusion is the main and key one for understanding the future of the apple business. Apple quality is a key criterion in international trade: “According to our estimates, world apple production is growing by 2% per year. On the contrary, the world trade in apples is decreasing by 1% per year. It is obvious that production is becoming more and more localized, which puts pressure on prices and raises requirements for the quality of apples,” says Andriy Yarmak, an economist at the Investment Centre of the Food and Agriculture Organization of the United Nations (FAO).

Mr Yarmak continues that “selling poor quality apples are becoming more difficult; it is simply banal that there are so many in the world. Apples of low- and medium-quality in Russia are now collected from their own orchards, but the demand in the segment of high-quality apples remains unsatisfied. Moldova predominantly grows apples in semi-intensive orchards where the percentage of high-quality apples is relatively low. This means that it is becoming more and more difficult to export such apples. Another confirmation of the problems with the quality of apples from Moldova is the lack of any success in diversifying apple exports. Meanwhile, Serbia, which exports about the same amount of apples as Moldova, has started selling large volumes of apples to the UK and EU countries as well as to the Middle East and Southeast Asia in the last two seasons. Moldova is limited to single supplies that do not have to continue.”

According to EastFruit estimates, high-quality apple exports to the Middle East and Asia may bring even more profit than to Russia, but there are too few of them in Moldova. Moreover, even local retail chains prefer to buy apples from Ukraine and Poland, ignoring local suppliers because they come calibrated and properly packaged, unlike Moldovan apples according to representatives of the Moldovan horticulture business.

Therefore, the future development of the horticulture business in Moldova will largely depend on improving the quality of its products grown. After all, if in the next season the apple harvest turns out to be significantly higher, then the prices for apples of average quality may fall to the level of prices for an industrial apple, which will be bought only for processing for apple concentrate.

Can green fresh peas become a niche product on the fresh produce market in Moldova?