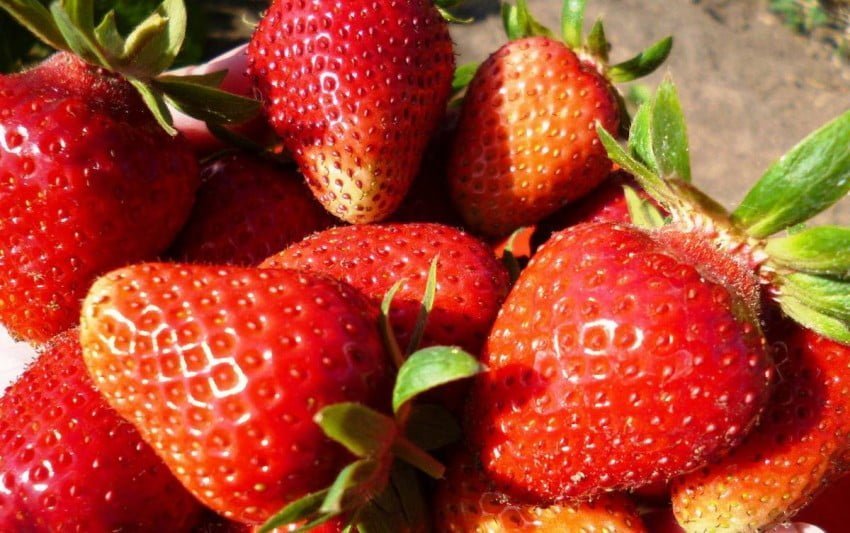 Home › News › Why are the prices and production of strawberries falling in Georgia?

According to EastFruit analysts, despite the continuing decline in the strawberry production in Georgia, its prices may be lower this year than usual. At first it seems completely illogical, so we will try to understand the reasons for this phenomenon in this article.

Since demand is higher than supply, it would seem that strawberry production in Georgia should grow. But on the contrary, it is decreasing! We will cover this a little later, but for now let’s look at what is happening with the prices in the market. 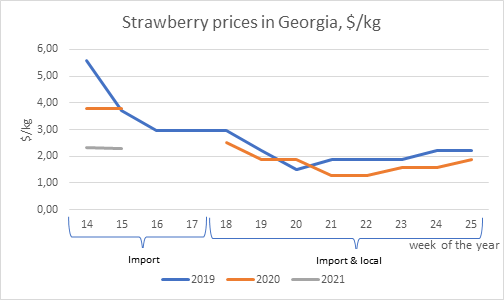 According to the weekly monitoring of EastFruit wholesale prices, in the first week of April 2021, the average wholesale price of strawberries was 8-9 GEL/kg ($2.32 – $2.61) – the lowest in the last 3 years!

The market mainly sells strawberries imported from Turkey since April. The declared price of imported strawberries in February 2021 (the period of the highest prices) was $0.40/kg. Data for March has not been published yet, but traditionally the price of imported berries declines in March by 15–20%, and in April it is 50–60% of March prices.

Farmers expect the Georgian strawberry season to start in late April – early May (weeks 17-18). First, products from local tunnels greenhouses will appear on the market, and mass harvesting in the open field will begin in the second half of May. Below are the wholesale prices for Georgian strawberries in 2020. 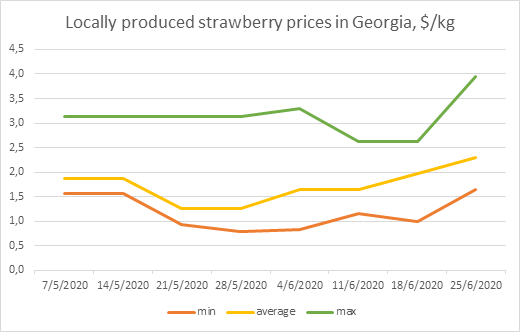 Why are the prices for strawberries already lower this year, and why do analysts assume that they can be even lower?

Among the main reasons, according to EastFruit experts, are the difficult socio-economic situation in the region, which negatively affects demand, the lack of tourists in Georgia and, as a result, low demand from HoReCa, a decrease in tourist flow in Turkey, the main supplier of berries to Georgia, affecting its exports growth and pressure on prices, as well as the devaluation of the Turkish lira, which makes Turkish production even more attractive for exports, in particular, to the Georgian market.

The constant pressure of imports on the strawberry prices will not foster the growth of its production in Georgia. However, there are other reasons for negative trends in production.

With the assistance of the state, Georgian farmers have begun to actively plant berry crops: blackberries, raspberries and blueberries in the past 10 years. However, the “berry boom” did not affect  strawberries – on the contrary, their production is falling. According to official data, the production of strawberries in Georgia has decreased by 2.5 times over the past 4 years – from 2,600 tons in 2016 to 1,000 tons in 2019. 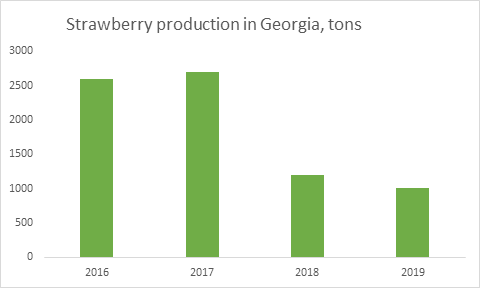 As EastFruit experts found out when talking to farmers, one of the main reasons for the decline in production was that strawberries, for some reason, were not included in the state compensation program “Plant Future“, unlike blueberries, raspberries and blackberries. Unfortunately, the reasons for this decision are unknown to us. Strawberry is the most widespread berry – the volume of its production and consumption in the world exceeds the volume of production and consumption of raspberries, blackberries and blueberries combined.

Nevertheless, the lack of state support, while supporting the other berries, is one of the main factors. The subcomponent of the state program “Financing of berry crops” provides for 100% financing for purchasing seedlings, drip irrigation systems and other materials necessary to create orchards of blackberries, raspberries and blueberries on an agricultural land plot with an area of ​​0.15-0.5 hectares.

Farmers in Georgia also believe that growing strawberries requires more time and labor compared to growing other berries, which is not entirely true. In addition, they do not like the need to constantly purchase seedlings, and planting blueberries on the site for 15 years seems more attractive to them.

The quality of the seedlings – farmers consider it to be another important factor and complain that the seedlings sold in Georgia are often of poor quality due to outdated seedling production technologies. Therefore, the plant does not reach its maximum yield, which affects the revenue per hectare. At the same time, they admit that they mainly buy local seedlings because of the low price, instead of more expensive and high-quality imported seedlings. The price of one wild strawberry seedling in Georgian nurseries is 0.8-1 GEL (0.23-0.29 USD) per piece. Interesting fact is that none of them in the conversation mentions quality, although it is not the quantity of berries and the yield that distinguishes a local seedling from a good imported one, but the quality of the berries harvested as a result. Modern consumers want high-quality products and are willing to pay more, so growing high-quality products is usually much more profitable despite the higher costs per hectare.

However, there are those who go against the trends, creating successful business projects for growing strawberries in greenhouses. For example, Adina not only supplies berries to the local market, but is also ready to export them. However, the pandemic interfered with export plans last year, and the company had to postpone the start of the season to April.

Earlier, EastFruit wrote about the plans of GlenBerries to plant 52 hectares of hothouse in the Imereti region of Georgia in 2021 for the cultivation of berry crops, including wild strawberries.

Since 2016, Georgia has consumed an average of 718 tons of imported strawberries per year. In 2019, when local production was at its lowest level in the last four years, the highest level of strawberry imports was recorded – just over 930 tons, accounting for 48% of total consumption. In 2020, imports decreased due to quarantine restrictions on the movement of vehicles, but the general trend continues – Georgia is becoming increasingly dependent on imports of wild strawberries, and local production continues to decline. 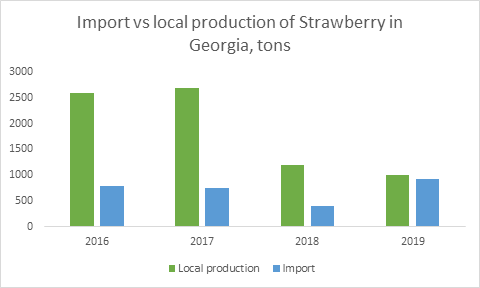 If strawberries are further excluded from the state support system, probably, its production will continue to decline in the next year, because prices for strawberries may reach their lowest levels this season. Neighborhood and free trade with Turkey, where the industry of growing strawberries for export is perfectly established, makes the task as difficult for local farmers as possible.

However, this situation may well become an opportunity. After all, the strawberries imported from Turkey are low-quality , as a rule. Projects for the cultivation of high-quality, tasty and attractive strawberries will certainly interest local consumers. It will be possible to demand a higher price for such products. We recently talked about the prospects for growing high-quality wild strawberries in greenhouses during an investment conference using the example of “Yagodnaya Polyana” LLC from the Autonomous Republic of Crimea. Although the presentation concerned Tajikistan, it will be relevant for any country, including Georgia.

In addition, if the situation with tourism is normalized in the next season, the level of prices for wild strawberries may rise sharply in the region. So, it’s time to think about these opportunities right now.