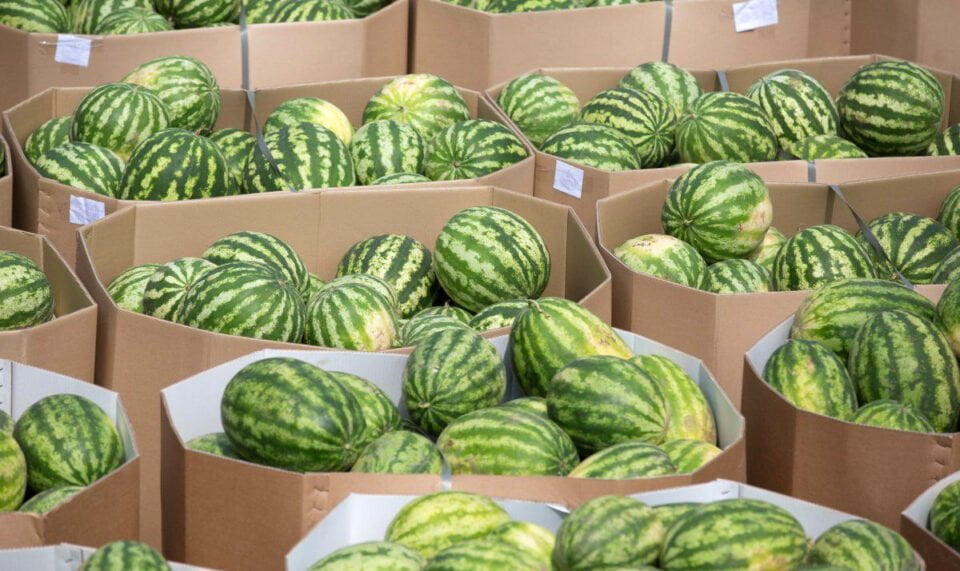 EastFruit analysts note increased exports of watermelon from Uzbekistan in the third decade of June 2021, and in the last few days this created a huge demand for transport. Watermelons are now the absolute leader in the ranking of requests for transport for shipments of fruits and vegetables from Uzbekistan to foreign markets. Onions are second in this ranking.

The season of cherries export from Uzbekistan can be said to be over, the export of apricots has also finished, although it has not been active due to the low harvest this year. The season of peaches exports has not yet begun and so far their price is not competitive on the main Russian export market. Thus, what is being exported from Uzbekistan and where?

Watermelons are exported to Kazakhstan and mainly to Russia. The geography of Russian cities is very wide, from the central part to the northern and eastern parts of the country. In 2020, the volume of watermelon exports from Uzbekistan reached a record level and amounted to 49.4 thousand tons, an increase of 7.5 times compared to 2019. About 90% of them were exported in August-September and only 6-7% in June and July. Considering high watermelon exports, setting a new record of its exported volumes is quite likely this year. However, the watermelon export season is just entering an active phase and it is too early to estimate it.

Onions are second in the requests for transport for fruits and vegetables exports from Uzbekistan. They are exported to Russia and Kazakhstan. Compared to May 2021, wholesale prices for early onions in Uzbekistan have decreased by about 30%. Together with relatively high prices for early onions on the Russian market, they create an opportunity to export Uzbek onions to Russia. However, early onions are becoming cheaper every week on the Russian market, and there is a steady downward trend in prices. Also, the “traditional” period of early onion exports from Uzbekistan to Russia is close to an end. Thus, EastFruit analysts forecast a gradual decline in onion exports in the coming weeks.

The rest of the requests for transport for shipments of fruit and vegetables from Uzbekistan to foreign markets refer to the export of melons, tomatoes, apricots, cherries and peaches.