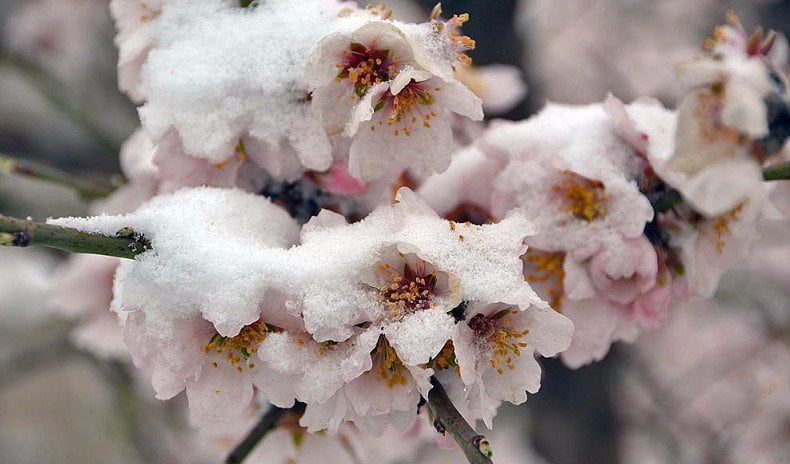 According to EastFruit experts in Uzbekistan, nature has presented many bad surprises for producers in Central Asia this year. Today there is a high probability of the loss of about half of the potential harvest volume of stone fruits in several regions of the Republic, including Bukhara, Samarkand, part of Jizzakh, Syrdarya, and Tashkent regions. Combined, these regions form 36% of the total production of fruits and berries in the country.

However, this preliminary loss estimate based on farmer surveys by EastFruit experts does not take into account the climatic anomalies that are unfolding right now. Unfortunately, the situation may change for the worse by next week. Below is a sequential list of the climatic surprises that have already occurred and negatively impacted the potential harvest of stone fruits in Uzbekistan.

The first surprise was the unusually warm weather in late January and early February led to a very early awakening of nature. As a result, stone fruit orchards bloomed. Almonds, apricots, and cherries blossomed in the southern and central zones of Uzbekistan. Thankfully, flowering had not yet begun in the northern part of the Republic. This warm weather surprise did not bode well since the average temperature throughout the year, and often during the seasons, is relatively constant. Anomalous warming increased the likelihood of a sharp cold snap or frost at the beginning of spring.

The second surprise soon followed at the end of February. A cold cyclone came from the Volga region and the farmers’ worst fears came true. On February 18 at the peak of flowering for certain stone fruit species, it was +26 in the afternoon and +18 at night in Tashkent. Then, one week later, the air temperature dropped to -5 in the afternoon and -9 at night. This cold weather lasted 2-3 days, which was enough to ruin the flowers on the trees.

Read also: Despite frost, dovcha appears in supermarkets of Uzbekistan! Where did they come from?

At the beginning of March, the Ministry of Agriculture of Uzbekistan began full-scale monitoring of all orchards, vineyards, and other farmland throughout the country to assess the damage from frost. Without waiting for official data results, EastFruit conducted a sample survey of farmers with many years of experience from different regions of the country and published preliminary estimates. According to these estimates, farmers in the northern and southern parts of the country have practically avoided losses. Firstly, for those regions, the flowering of stone fruit trees had not yet begun. Secondly, the frosts turned out to be milder than expected and the temperatures there dropped only to zero degrees. The central region of Uzbekistan suffered the most. The surveyed farmers of the Samarkand and Bukhara regions reported almost complete loss of their future harvest of apricots (early varieties) that had blossomed and up to 50% loss of sweet cherries.

The third surprise (and second frost) arrived after the two weeks of warm weather that followed the first frost in late February. On March 13, a second cold cyclone came from the north. By March 14, in the capital of the republic and Bukhara, thermometers showed -3 degrees Celsius day and night. In Karakalpakstan, Khorezm, some areas of Navoi, and Samarkand regions, snowfall and strong wind gusts even led to damage of power lines.

There was no snowstorm or blizzards in the capital city of Tashkent, only a little snow fell and melted by the next morning. Air temperatures plummeted across the country with the exception of the Fergana Valley. In this part of the country, the air temperature dropped to zero or slightly lower from March 14 to 15; during the day it was about five degrees Celsius. As a result, the stone fruit harvest in the central and middle zones of the country was hit again with frost.

The Ministry of Agriculture did not have time to fully assess the damage from the first frost. Now, most likely, the Ministry will have to revise the results of the monitoring carried out in the first ten days of March. How much the preliminary results will worsen is difficult to predict. However, according to forecasters, the air temperature will begin to rise starting from the second half of this week and warm weather should re-establish.

Let’s hope that there will be no more new weather surprises. However, taking into account the current known losses, it is probably not necessary to count on a record harvest of stone fruits. Given the cold weather, active pollination of those fruit crops, which depend on pollination by bees, cannot be expected and we are talking about one of the main export fruits of the region – cherries.

As practice shows, weather anomalies can negatively affect fruit quality. In turn, this can lead to a decrease in their value and the impossibility of exporting significant volumes. Therefore, it is possible that the income of producers in 2021 from the production of stone fruit crops will decrease, not only due to a likely decrease in production volumes.

EastFruit will closely follow as events unfold and promptly inform about the impacts of such sudden changes in air temperatures for this year’s harvest.