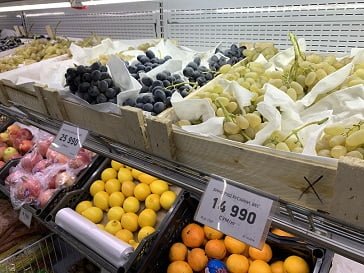 According to EastFruit analysts, in the first half of 2021, Uzbekistan worsened its position in the Russian fruit market. For six months of 2021, the country fell back in the 14th position in the ranking of the largest fruit suppliers to the Russian Federation, reducing supplies by 10% in volume and 3% in value.

The main reason for the decline in positions was climate change, which affected Uzbekistan in 2021. A sharp warming in February 2021 triggered the awakening of fruit trees too early, followed by two waves of frost . As a result of frost damage, the harvest of Uzbek apricot suffered the most, and its exports to Russia decreased by almost seven times. Exports of peach and nectarine decreased by 41% (as of the end of June), exports of raisins by 16%, exports of lemon by 28% and exports of plums almost halved. We also note a decrease in exports of fresh apples by 44%, table grapes by 68%, walnuts by 66% and melons by nine times.

At the same time, Uzbekistan was able to increase the exports of watermelon and cherry. Export of cherry to Russia increased 2.6 times in physical terms, and exports of watermelon – 4.2 times! But Uzbekistan had to reduce prices for both cherry and watermelon for exports to Russia, therefore, the total revenue from exports did not increase as much as the volume of exports. In particular, the export price for the Uzbek watermelon dropped by 62% at once compared to 2020.

In general, in the first half of 2021, Russia increased fruit imports by 3.2%. Ecuador remained the leader in deliveries. Turkey, Egypt and South Africa improved their positions – each of these countries increased their exports by 10-17%. Serbia remained in the fifth place with stable export volumes. Moldova fell back in the eight place after a reduction by 23% in fruit exports to Russia.