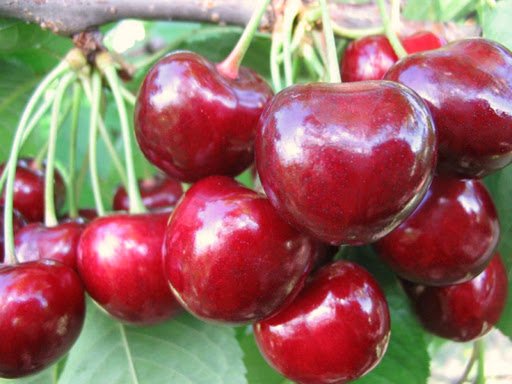 Given EastFruit’s information on the accelerating collapse of prices for cherries in Uzbekistan, the news from the National Information Agency of Uzbekistan that for the first time in the country’s history Uzbek cherries were exported to Singapore seemed encouraging. The prices for Uzbek cherries in supermarkets in Singapore were $ 8.8 per package weighing 0.5 kg, i.e. $ 17.6 per kg.

How significant is this for the fruit business of Uzbekistan and does it give producers hope for higher prices for their products in the future? It is very obvious that the export of cherries outside post-Soviet countries allows you to get a higher price than when it is supplied to Russia or Kazakhstan, which means that both large and small farmers can increase their income.

EastFruit analysts decided to find out if there is progress in diversifying cherry exports outside post-Soviet counties.

News on the export of Uzbek cherries to Singapore do not report the volume of delivery, however, it is most likely to be air delivery, which can range from 1 to 3 tons. Uzbekistan exported the same volumes of cherries to Malaysia, Thailand, Great Britain, Norway and Oman in previous years. However, they did not have any significant impact on the market. Nevertheless, these exports are very important for the country’s image and further promotion of Uzbek cherries in these markets. No less valuable is the experience of the exporter, which he can get here. In addition, it shows others that anything is possible if you want to. 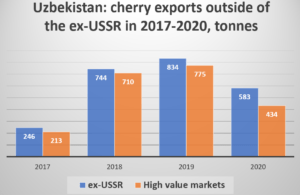 Of course, often a very small volume is exported by air. Therefore, in addition to air transportation to the above countries and to Singapore, Uzbekistan exported cherries by road to post-Soviet countries. Accordingly, export volumes were significantly higher.

Naturally, the Asian direction dominates here – China and South Korea imported more than 700 tons of fresh cherries from Uzbekistan in the best export season. Although this is less than 1% of the cherries produced in the country, it had a positive impact on the market. After all, the best quality cherries were selected for export to these countries.

Also, significant volumes of Uzbek cherries were exported to such remote countries as the UAE and Poland.

It is interesting to note that the export of cherries in the Asian direction had a clear growth dynamics until 2019 inclusive. India, Mongolia and Afghanistan were added to the importers of Uzbek cherries. However, the volume of cherries exports to Asia and the share of this direction in exports decreased sharply in 2020, while the volume of exports to the EU and the Middle East, on the contrary, increased. 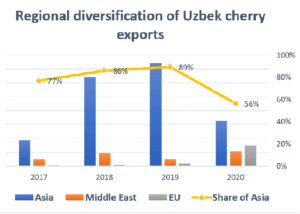 Is there still a breakthrough in the supply of cherries from Uzbekistan to markets outside the CIS? Is there any progress? To answer this, we split the export of Uzbek cherries into exports to the CIS countries (Russia, Kazakhstan, Kyrgyzstan, Tajikistan, Ukraine and Belarus) and to other countries. Among other countries we singled out markets where cherries are sold at high prices. These markets are prioritized and have the greatest potential for long-term supply. 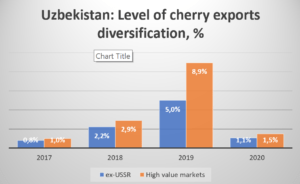 As you can see from the chart, Uzbekistan reached the maximum level of export diversification in 2019, when almost 9% of cherries were exported to markets outside the CIS by export weight and almost 5% were exported to countries with high prices for cherries! However, total exports in 2019 have been at a record low comparing to recent years.

By the way, it is important to look at these indicators in terms of volumes. According to statistics, the total exports of Uzbek cherries has increased sharply in 2020. But the proportion of all “profitable” directions, as we see, dropped sharply. How have the volumes of cherry exports from Uzbekistan to countries outside the CIS changed?

It is interesting that, despite the sharp growth of cherry exports in 2020, supplies outside the CIS dropped sharply. This is bad news as it seems that this direction is not a priority, but rather viewed as secondary, despite the high price level. It is likely that most Uzbek cherry exporters prefer to put less effort to improve the product and get a lower price than invest in quality and more complex logistics and get a higher price. This might be the main problem in diversifying Uzbek exports.

As we can see in the graph below, there is no radical growth in the number of countries where cherries are exported from Uzbekistan. Moreover, in 2020 it fell to the lowest level in the last three years. At the same time, we took into account only countries where at least 1 ton of cherries was supplied. 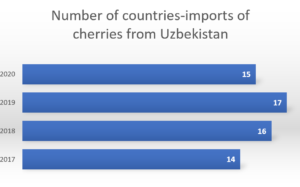 In 2021, given the decrease in the production of cherries in Uzbekistan due to frosts, we expect a decrease in the volume of their exports. In this regard, a better diversification is not expected in 2021 either. Perhaps the impetus for more active actions to expand the geography of exports of Uzbek cherries will be the low demand for it in Russia this year.

In the meantime, it should be noted that Uzbekistan does not take advantage of its proximity to the world’s largest cherry market. The export volumes of cherries from Uzbekistan to China do not exceed 200 tons per year, with the exception of 2019, when about 600 tons were exported to China. Given annual imports of 360 thousand tons per year, this is a drop in the ocean. You can read how to grow cherries for export to China here.

The possibilities for the supply of cherries to South Korea are not yet exhausted. Early Uzbek cherries can be exported to the countries of the Middle East, Afghanistan and Mongolia, where they have previously been exported. Export is needed not only in the premium segment, the share of which in the production of cherries in Uzbekistan is still very low.

Another promising market for cherries, where they can be delivered by road, is Poland. Although the prices here are unlikely to be premium, as in Singapore, Malaysia or the UK, Poland may well pay more than Russia for a quality fruit. The Uzbek export of cherries to Poland also does not yet exceed 150 tons per year, while in 2020 Poland imported 4.6 thousand tons of cherries. Therefore, the prospects here are very good.

Besides Poland, it is possible to try exporting to other EU countries, especially those in its eastern part. There is a constant increase in the demand for cherries outside the season of their local production, and the requirements for size and quality are not as high as in the UK, China or Singapore.

Anyway, the main task of Uzbekistan in the near future is to increase the percentage of premium cherries in the total harvest and investments in the infrastructure for processing: hydrocooling, optical sorting, modern approaches to packaging and marketing.