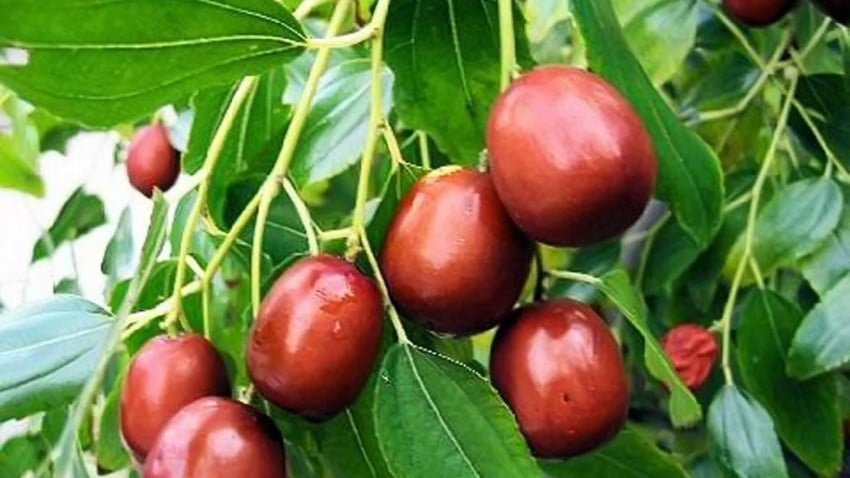 Ziziphus fruit are small in size, round or oval in shape and become a reddish-brown colour when ripe. It is known by many names such as jujube or jujuba, unabi (Georgian), Chinese date, Chinese apple, Indian plum, Indian jujube or dunks.

In Ukraine, few people know about this plant. But, due to climate change, now it can be safely grown in southern Ukraine and even in more northern regions. It is drought resistant, but does grow well with humidity. Other advantages are the late flowering of ziziphus. According to the SEEDS website, this plant tolerates cold temperatures down to -25 degrees so May frosts would not harm it. The tree requires minimal pruning, cross-pollinates from insects and matures early.

Seedlings of this unique plant are actively being offered by many Ukrainian garden centers. There are approximately 400 varieties of this wonderful tree.

A huge advantage of growing ziziphus is that the plant does not require much care; it can grow in the poorest soils. A mature tree takes root about 3 metres deep where it has enough moisture. But, due to its deep root system, it does not like surface groundwater (excessive water can make the tree wilt). Also, this plant does not need to be treated with chemicals; it is practically unaffected by pests or diseases.

Read also (in Russian): In the markets of Moldova, buyers are offered three varieties of exotic ziziphus

Ziziphus fruit resemble a date, especially when they are slightly wrinkled. It ripens in late September through October. Harvest of this fruit can reach up to 30 kg per tree! Dried ziziphus fruit can be stored for two years or longer.

Ziziphus tastes like a sour apple without any smell. Experienced farmers advise to let the berries rest in a cold room for a while after picking – this makes the berry become tastier. Due to their sweet taste and chewy texture, this fruit is often dried. But ziziphus fruit can also be eaten fresh or used for making preparations such as compotes, jams, syrups, and candied fruits.

The fruit is also know for promoting good health. Ziziphus contains more ascorbic acid than citrus fruits as well as flavonoids, pectin, carotene, rutin, iodine, cobalt and other elements. It is also used by traditional herbalists to help with improving sleep and decreasing anxiety.