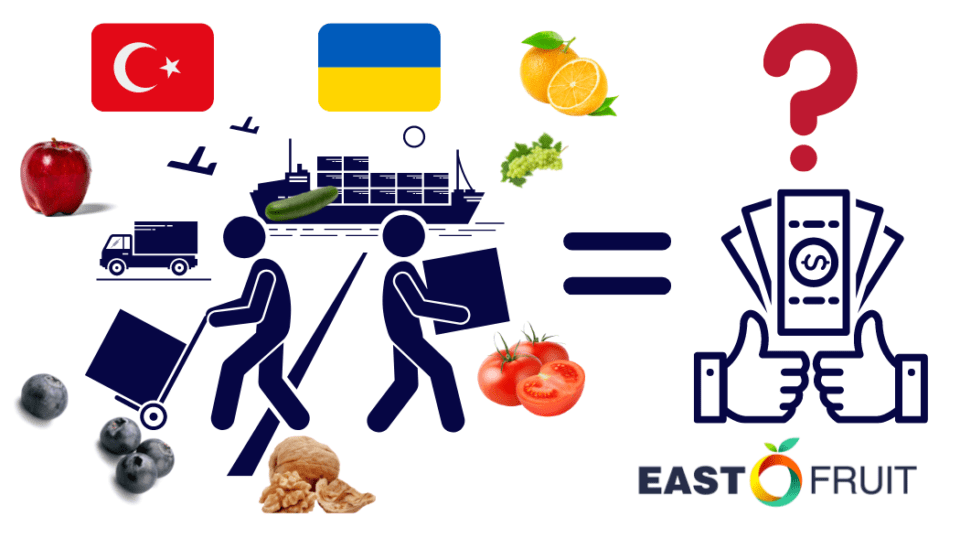 Home › News › Ukraine and Turkey have signed a Free Trade Agreement – what should the Ukrainian produce business expect?

A 15 year-long negotiations on a free trade zone between Ukraine and Turkey ended on February 3, 2022 with the signing of the FTA agreement in Kyiv. This news stirred up the produce business of Ukraine, many representatives expressing fears that Ukrainian vegetables and fruits would no longer be able to compete with Turkish ones. EastFruit experts decided to find out whether these fears are justified and whether Ukraine will benefit from the agreement?

Firstly, let’s figure out what the trade in vegetables and fruits between Ukraine and Turkey looks like now. The exports from Ukraine to Turkey is simple – among fruits and vegetables, Ukraine exports only walnuts to Turkey, although there were serious problems with their export in the last 1.5 years. However, we will talk about this below. Periodically, Ukraine exports onions, apples (for re-exports to Egypt) and occasionally potatoes.

Of course, Ukraine imports much more from Turkey than it exports, and it is Turkish imports that are most feared in Ukraine. Let’s analyze the imports of Turkish products to Ukraine.

For comparison, the largest volume of fruit and vegetables Ukraine exported to Turkey (mainly walnuts) was noted in 2019. It was worth $37 million, which accounted for about 12% of Ukraine’s export earnings in this category of goods. Thus, Turkey is an important sales market for Ukraine, as well. However, let us return to the import of fruits and vegetables from Turkey. 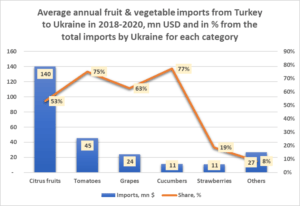 The main position of fruit and vegetable imports from Turkey to Ukraine was citrus fruits accounting for 54% of all deliveries. Another 18% were greenhouse tomatoes, 9% – table grapes, 5% – cucumbers, and 4% – fresh strawberries. All other positions together gave about 10% of the value of imports. They included various exotic fruits that are not grown in Ukraine, dried fruits, as well as fresh apricots, peaches and bell peppers.

Turkey dominated among the suppliers of greenhouse tomatoes and cucumbers to Ukraine – Turkey accounted for 75% and 77% of all imports, respectively. Turkey also dominated in the segment of citrus fruits (53%) and table grapes (63%). By the way, the main position in the category of citrus fruits was Turkish mandarins, while the share of Turkey in lemon, orange and grapefruit imports was noticeably lower.

Ukraine cannot grow most of the fruits and vegetables that it currently imports from Turkey, except for greenhouse cucumbers and tomatoes. Meanwhile, there is a zero import on the import of citrus fruits and other fruits that are not grown or are grown in insufficient volumes in Ukraine from Turkey. As for greenhouse vegetables, we need to go in more detail, since Ukraine grows them. Moreover, record high gas prices in the winter of 2021/22 have already put Ukrainian greenhouse complexes in a very challenging environment.

What will the signing of the FTA between Ukraine and Turkey change for Ukrainian greenhouse growers?

Imports of greenhouse cucumbers, tomatoes and peppers are currently subject to an import duty of 10%. After the entry into force of the FTA agreement, the rate should be zero, although we have not yet seen the full document and do not know this for sure. However, this is the most likely scenario.

How important is this and how will it increase competition in the market?

Reducing the duty by 10% to zero, will give Turkish tomatoes about 1.0-1.5 UAH (about $0.05) of an additional advantage in the peak sales season, and this is a lot. In our opinion, other factors will have a greater impact on the competition between Ukrainian and Turkish greenhouse products, namely, a sharp increase in energy costs and the devaluation of the Turkish lira. The first factor will impact Ukraine more than Turkey, and Turkish exporters will benefit from the second factor, too. Although there is one more point – Turkey imports many inventories for growing greenhouse vegetables and their costs will also increase.

It is obvious that the FTA with Turkey is, at first glance, bad news for greenhouse growers in Ukraine. However, they have far more compelling reasons to worry than a 10% cut in import duties on Turkish tomatoes, cucumbers and peppers.

One should look at this from the other side. Ukraine has its own season, when growing greenhouse vegetables is cheaper than in Turkey, and it lasts from mid-June to September.

“Turkey is one of the most “protected” economies in the world. Traditionally, import duties are quite high here. Therefore, it would be very interesting for Ukraine to get free access to this huge market. Since Turkey is located in a different climatic zone, the two countries perfectly complement each other in the food industry and food products. Cucumbers, tomatoes and peppers are very difficult to grow in greenhouses in Turkey in summer, because it is too hot there. Now, if Turkey cancels import duties for Ukraine on greenhouse vegetables (and the duty before the FTA ranged from 40% to 100%, that is, it was actually prohibitive), then Ukrainian exporters may well try to arrange the exports of greenhouse tomatoes to Turkey in summer,” – economist at the Investment Centre of the Food and Agriculture Organization of the United Nations (FAO) Andriy Yarmak, says.

Horticulture business expert and FAO international consultant Fedir Rybalko also believes that the FTA with Turkey can bring Ukraine some benefits. “Turkish market can be very interesting for Ukrainian suppliers, especially in case of direct deliveries to retail chains. After all, we have very efficient logistics, because Ukrainian citrus importers are now paying for the return freight. In other words, the cost of exporting to Turkey will be very low. For example, if prices for some products start to rise in Istanbul, Ukrainian products will fill this niche in just 48 hours. Also, Turkey is a very interesting market for suppliers of fresh blueberries from Ukraine. The consumption of blueberries is growing there, and Ukraine exports them when Turkish local blueberries have long ended and neighboring countries cannot supply the market either. We think that Ukraine could export up to 200 tonnes of blueberries to Turkey per season,” says Fedir Rybalko.

He also notes that Turkey is an important transport hub in the region, and Turkish Airlines have direct flights to a record number of cities in the world. Therefore, by entering the Turkish market, Ukraine will be able to use more opportunities of transportation by air. “We can use all existing ferry crossings from Skadovsk and Odesa. For example, a refrigerator loaded with fresh blueberries in the Zhytomyr region for delivery to Singapore, Malaysia or other Asian countries can arrive by ferry to Istanbul airport. This will reduce the risk of loss of quality during exports and will be more cost-effective than delivery by air from Ukraine with reloading in Istanbul,” Fedir Rybalko says.

An even greater potential opens up for Ukraine in fruit and vegetable trade with Turkey if Ukraine ever starts using its largest transport corridor, the Dnipro River, for this. Ukraine could well become a major transit hub for the supply of Turkish products to Belarus and, through Belarus, to the EU market. Trade and transit bring new trading places and budget revenues.

Andriy Yarmak says that the main good news for the produce business will be the opportunity to return to the Turkish walnut market. “Walnuts have been the main export position of Ukraine in the fruit and vegetable segment for many years in a row. However, due to the fact that competitors could supply walnuts to Turkey duty-free, and Ukraine had to pay duties, Ukrainian suppliers lost this market. I estimate Ukraine’s losses from the absence of an FTA in Turkey at $40 million a year. Now Ukraine will definitely return to the Turkish walnut market and will be able to successfully push out competitors there due to cheap logistics,” says the FAO expert.

He also notes the indirect benefits that a free trade zone with Turkey gives Ukraine. “Turkey is one of the largest re-exporters of agricultural products in the world. By supplying products to Turkey, Ukraine will open up new markets. Ukrainian companies already had a similar experience – after their goods entered the Turkish market, they were found in the markets of Africa and Asia, and then exporters directly contacted suppliers in Ukraine. This is an important aspect that should not be underestimated. I think that Turkish and Ukrainian companies may experience synergy in re-exporting fruit and vegetables to the countries of the Middle East and Africa,” notes Andriy Yarmak.

It should also be noted that any increase in trade and reduction in transaction costs is always a direct benefit for any country. These include new jobs, growth in budget revenues, and increased access of consumers to a wider range of products at a competitive price. However, it is obvious that the fruit and vegetable business of Ukraine as a whole is most likely to benefit much more from the free trade zone with Turkey than Turkey.