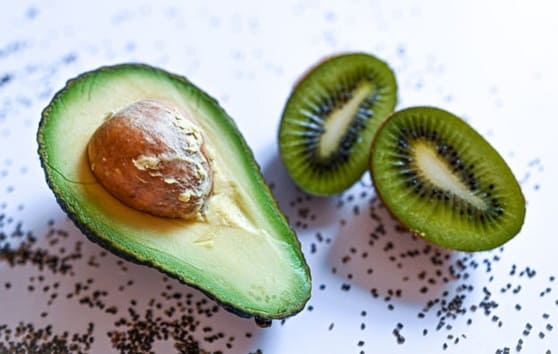 Home › News › The cheapest kiwi is sold in Georgia, and the cheapest avocado in Ukraine

During the audit of the fruit and vegetable departments of supermarkets in five countries of the region, EastFruit experts analyze, in addition to the range and quality of vegetables and fruits, the levels of their retail prices in stores in Kyiv, Chisinau, Tbilisi, Dushanbe and Tashkent. For the second year now, we have included previously exotic, but rapidly gaining popularity, kiwi and avocado, to the studied fruits.

In November 2021, kiwi prices were the lowest in stores in the capital of Georgia, Tbilisi. This is not surprising, since Georgia continues to increase production and exports of kiwi, taking advantage of its climatic conditions. Georgian kiwi is exported to Japan and Germany and is considered one of the sweetest in Europe (see video about kiwis in Georgia).

On average, kiwi costs only $1.38/kg in Tbilisi supermarkets. In Kyiv, where all the kiwis on the shelves are imported, the prices are 35% higher. In Chisinau they are 60% higher, and in Dushanbe you have to pay 2.5 times more for kiwi than in Tbilisi. At the same time, the conditions for growing kiwi in Tajikistan are not worse than in Georgia. For instance, in neighboring Uzbekistan, there are quite a few small kiwi producers, and maybe that’s why kiwi prices are much lower there than in Tajikistan. In Uzbekistan, you can now buy kiwi at retail at $2.14/kg average. 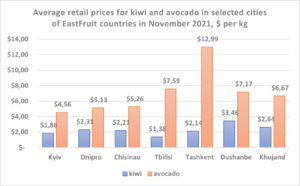 The most expensive avocado, by a huge margin, was found in Tashkent, although you can also try to grow it in Uzbekistan. As with kiwi, Georgian farmers are pioneering avocado cultivation in the region. The first commercial avocado farm has already been established there. It is obvious that all avocados on the shelves of Georgia are still imported, as their prices are relatively high – much higher than in Ukraine and Moldova and approximately at the same level as in Tajikistan.

The cheapest avocado this year was in Kyiv – the average price was only $4.56/kg and decreased by almost $2.5/kg over the year! But in Chisinau, the capital of Moldova, the decline in the retail price of avocado was insignificant, which left it in third place in terms of prices, after the Ukrainian cities of Kyiv and Dnipro.

Learn more about the retail trade of vegetables and fruits, including the sales volumes of kiwi and avocado in supermarket chains during the first international Retail Forum on December 2, 2021 in Kyiv. Registration for participation in this event and in the conference “Fruits and Vegetables of Ukraine 2021. New Investment Opportunities” is available here.