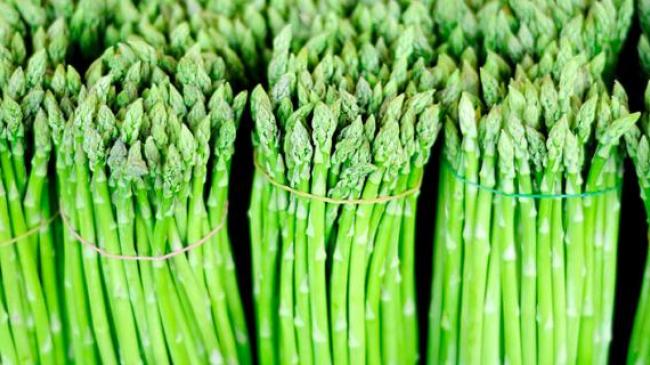 Home › News › Russian asparagus with a Dutch flavor — how much asparagus does Russia produce and who are the largest asparagus growers?

Traditionally, EastFruit pays a lot of attention to trending crops even before they become such. Asparagus is a vegetable that is still a niche product in our region. However, many producers in our region already make good money on asparagus, first of all, in Ukraine, where asparagus production began to actively develop about 10 years ago. In Georgia the culture of asparagus consumption is well developed due to the traditions of wild-growing asparagus consumption, and now its commercial production is also developing.

In Russia, asparagus is only becoming popular among wealthy consumers and retail prices for it are relatively high, $ 10 to $ 15, while consumers in the EU pay 2-3 times less. However, over the past five years, several relatively large commercial asparagus producers have emerged in Russia as well.

The ” Asparagus Valley” company from North Ossetia calls itself the largest producer of asparagus in Russia. It states that it has 55 hectares of it but plans to harvest only about 120 tons of fresh asparagus in 2021. According to other sources, asparagus area in the company has already been increased to 70 hectares and is planned to double, while developing a nursery for growing asparagus rhizomes to sale to other producers. The Republic of North Ossetia announced that the area cultivated with asparagus in the region will increase to 600 hectares in the future, but these statements are made by officials ignoring the realities of the market and technological peculiarities of the establishment and development of asparagus business. 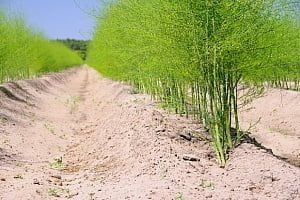 Rassvet farm affiliated with AFG National also invests in asparagus. The company’s plantations are located in the Nizhny Novgorod region. The company specializes in the industrial production of fresh berries: strawberries, blueberries, raspberries, blackberries and honeysuckle. However, the company believes that asparagus is ideal for berry producers because the agricultural technology of its cultivation, the post-harvest handling and marketing are very similar to the ones in the berry business. Therefore, in 2018, the company established the first asparagus plantations, which have already increased to 16 hectares. Rassvet farm plans to have the first commercial harvest of asparagus, about 30 tons, this year. The company produces green and white asparagus.

Asparagus has been grown at the Agrofirma Otechestvenny Ecoproduct LLC in the Moscow region since 2016. The company was one of the pioneers of the Russian asparagus business and has now a total planted area of ​​about 7.5 hectares, although the company says it plans to gradually expand it. By the way, the same company offers another niche vegetable, popular in many European countries, artichoke. It also uses asparagus planting material from the Netherlands and Germany. 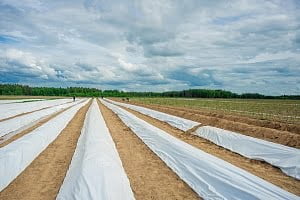 At the same time, EastFruit found many small, semi-commercial asparagus plantations, usually near large Russian cities. An interesting story was recently published on the website of the administration of the Tambov region about a farmer from the Netherlands, who married a Russian girl, decided to start farming in the Tambov region in Russia. Having won the Agrostartup competition, the couple received a grant for the development of open field crop production and planted asparagus on a small area. Thus, we are talking not only about the Dutch planting material, but also the experience that is now being used in Russia.

By the way, asparagus is not really an exotic crop for Russia. It is believed that before the revolution that ended the Russian Empire, asparagus was cultivated here on thousands of hectares and was even actively exported to Europe. Then, consumers completely forgot about asparagus as a bourgeois product, and remembered it again only after residents of the former USSR began to actively visit EU countries and get acquainted with the local cuisine. This is how Russian gourmands and consumers with a relatively high level of income again love asparagus.

Read also: Asparagus in Uzbekistan: assessing the profitability of production and exports

The interest in asparagus in Russia is fueled by food and sport bloggers, who share information on properties of asparagus for those who lead a healthy lifestyle, strive to lose weight, or like to eat delicious food. Asparagus dishes are a must-have on the menu of many restaurants in Russia. Russia imports fresh asparagus from Thailand, Peru, Mexico, Ecuador and, more recently, from Georgia and Armenia. Frozen asparagus is imported mainly from China and Peru.

Many might be surprised if we say that asparagus is grown by almost all floriculture professionals and amateurs in Russia. It is called “hare chill” or “medicinal chill” among the locals and florists. They do not eat it and It is used in bouquets or landscape design.

How many hectares of asparagus are there in Russia today? According to EastFruit, there are no more than 120 hectares of commercial and semi-commercial asparagus fields in Russia, while there are at least three times more of them in Ukraine. Accordingly, the opportunities for expanding the cultivation of asparagus in the region are still very good, and investments in asparagus should be considered primarily by farms located near large cities and with insufficient areas to grow cereals, oilseeds or other industrial crops. As the experience of Chile, Peru, Mexico and some EU countries shows, it is also a good idea for berry producers to grow asparagus to extend the production season and use agricultural equipment, labor, refrigeration, packaging and marketing capacity more efficiently.

Prices for potatoes, onions and carrots in Belarus are record high – what are the reasons?