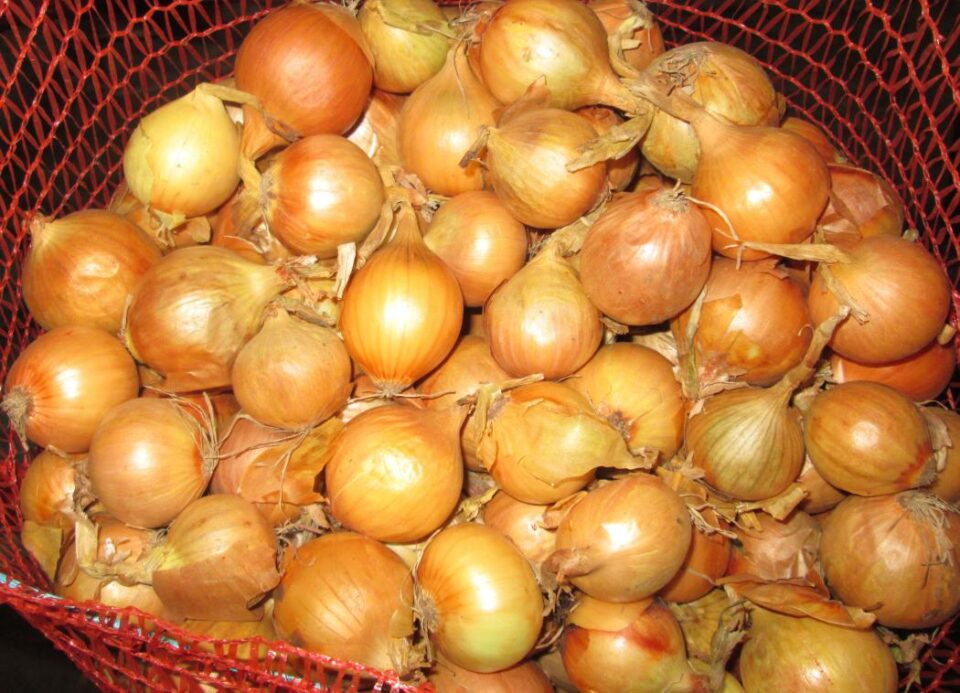 Exports of onions from Ukraine in the first half of the 2020/21 season reached their highest level in the last five years. However, EastFruit reports prices for these onions within the country have remained extremely low since early July 2020.

This season Ukraine has all the prerequisites to not only set a new record for onion exports but also regain its status as a net exporter of this product since imports in July-December 2020 amounted to only 112 tons. Nevertheless, the growth of exports of Ukrainian products has not yet had a special effect on prices within the country. Moreover, the lowest price for onion in Europe was established in Ukraine from the very beginning of the season and there has not yet been much progress.

“Ukraine in the 2020/21 season has every chance to set at least a five-year export record, but even this may not be enough to positively affect the price within the country,” says Yevgeny Kuzin, the head of international projects at Fruit-Inform.com. “Exports this season has again become a forced measure for Ukrainian onion producers. Since the beginning of July 2020, the price of Ukrainian products has collapsed and remains at the lowest level in the Eastern European region.” 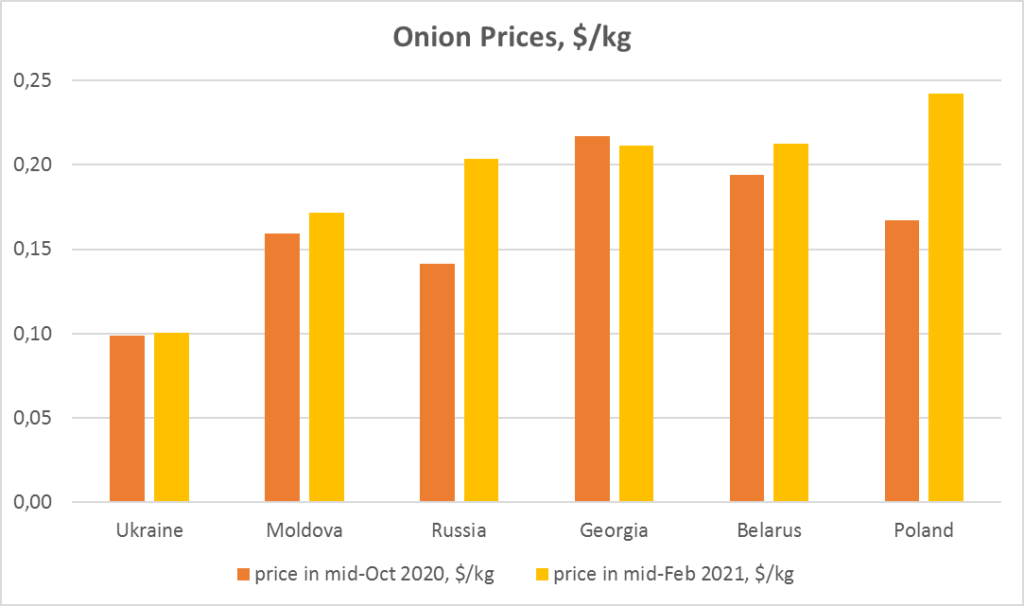 According to EastFruit price monitoring data, the average price for onions in Ukraine is kept at $0.10/kg while in other countries of the Eastern European region prices are at least 60% higher. In the EU-15 countries, onion wholesale prices are even higher than in Poland. Only in Georgia and Ukraine have prices not increased at all since mid-October 2020. In Georgia, this is due to the small domestic production of these products and a stable dependence on the supply of imported onions, but Ukraine is an active exporter.

In other countries, the rise in prices since mid-autumn 2020 has been quite significant. In Russia, small producers almost completed their sales by the end of the year and the average price increased by 44% to $0.20/kg. Poland managed to maintain a stable rate of export for its products and the price by mid-February rose to $0.24/kg. In November 2020 alone, Poland exported 14,300 tons of onions, which is more than Ukraine for the entire first half of the 2020/21 season, which was a record one.

“In Ukraine, the main criterion for pricing in the onion market is now the quality of products. The volumes of low-quality onions in storage are still high and these products are offered at an extremely low price from $0.07/kg. Buyers in Ukraine are ready to pay twice as much for quality onions up to $0.14/kg, but producers still prefer to keep such consignments in storage in the hope of a more significant rise in prices at the end of the season,” says Evgeny Kuzin. “However, do not forget that over the past ten seasons, a significant (several times) increase in prices during the storage period of onions was noted only in four cases and twice in the spring in general cost the same or even cheaper than in the fall.”

EastFruit experts point to another potential threat to price games with onions – the active development of the winter onion segment, which may have an impact on pricing in May-June (i.e., very end of the season). Last season, a similar situation was observed from the growth of production of winter onions literally in a month (i.e., from the beginning of June to the beginning of July 2020) and onion prices on the market collapsed several times. Then, the price fell to $0.10/kg and since then it has not risen apart from occasional surges.

Of course, one should take into account that such a price collapse occurred even in the face of a shortage of its own last year’s products when the onion imports during the 2019 season were already playing the main role in the market. On the contrary, production has grown significantly in the current season, but there are certain questions about the quality of onions in storage.

Expectations of high winter onion production this spring are confirmed by the import figures for onion sets in August-September 2020. Imports of onion sets in the period from August to September 2020, although decreased compared to the same period in 2019, were approximately three times higher than in previous seasons.

This does not mean that less winter onion sets were planted for the 2020 harvest. It is possible that the areas have even expanded given the use of local planting material.

Winter onion for Ukraine used to be considered a relatively new niche product, but in the last two years, the number of producers engaged in its cultivation has grown significantly, especially in the small segment. Firstly, farmers were able to quickly hone the technology of its cultivation, which allowed them to enter the market even before the production of seed winter onions appeared there and much earlier than the early varieties of spring onions. Secondly, the use of onion sets for the production of winter products allows even small farmers to grow it without irrigation and without special equipment in some areas, which allows reducing investment and production costs. Also, a small segment of spring onion sets has begun to appear, which has one big advantage – a very short period from investment to receipt of proceeds because it ripens earlier than the early varieties of seed onions according to practitioners.

In any case, it is not easy to predict the development of events on the Ukrainian onion market now. Obviously, high-quality products will find their buyers. However, its owners should now take care of finding sales markets outside the country because an increase in the domestic onion price in the remaining three months of the season is not at all guaranteed before the massive appearance of winter onions on the market.

“The development of vegetable and potato growing in Ukraine is impossible without the initial orientation of the business towards exports to the most demanding countries in the world. As soon as we get a little more onion than is needed for the domestic market, the price for it immediately falls below the cost price and thousands of tons of onions end up in a landfill at the end of the season and exports are carried out in an emergency mode. If onion production turns out to be below market demand, prices also skyrocket to make imports attractive to suppliers because onions are a product with a low elasticity of demand – there is practically nothing to replace it within recipes,” explains Andriy Yarmak, an economist at the Investment Centre of the Food and Agriculture Organization of the United Nations (FAO).

“Accordingly, for many years now, our producers have been forced to play in a kind of casino, wondering when to sell onions and when to hold them. In the casino, as you know, the house always wins. If their production is export-oriented (i.e., not for growing onions and selling them in nets from storage, but for the production of a finished product: sorted, calibrated, packaged, etc.), they have all the necessary export certificates, and constantly work to find stable contracts with importers, then risks associated with a drop in onion prices will be minimized. After all, there will always be an alternative to the domestic market and often more attractive. For example, we could already systematically work to provide supermarket chains in the Middle East with onions, we have good opportunities for exporting onions to Romania and Bulgaria, and we can develop the direction of cleaning and freezing onions and even export fresh peeled onions to the EU countries. Orientation to the finished product, and not to raw materials, would help Ukraine to stabilize this market to a large extent and reduce the risks for new investors,” conclude Andriy Yarmak.

Uzbekistan expands range of fruit and vegetable exports to China

In Moldova, price for Moldova variety grapes rose due to demand in Romania

Georgian producers strengthen their presence in the Gulf market