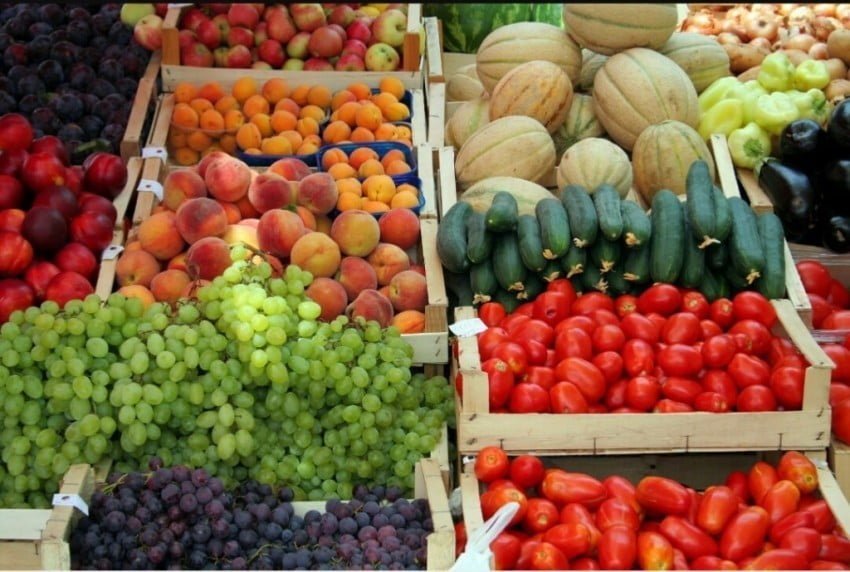 According to EastFruit analysts, the main set of fruits and vegetables in Uzbekistan has risen in price by more than 1.5 times over the year – by 53%. Prices for vegetables grew much faster than those for fruits. Note that we talk about wholesale prices – as a rule, they vary more notably than retail prices. We decided to understand the reasons and prospects for the growth or decline in prices for fruits and vegetables in Uzbekistan in the coming months.

The vegetable basket, including potatoes, has risen in price in Uzbekistan by about 85% over the year if comparing prices in October 15, 2021 to the same date in 2020. Its price was at a record high for this period.

Potato prices seem the most interesting to us. Despite the very critical situation in the potato market in Eastern Europe, where prices are literally going through the roof, prices in Uzbekistan are now approximately the same as last year. The situation on the Russian market seems to be especially interesting for Uzbekistan, since it is Russia that is usually the main supplier of potatoes to Uzbekistan, but there is an upward trend on the potato market there and prices are record-breaking. Accordingly, this factor is likely to start influencing the Uzbek market soon, when large import volumes will be required, and prices for potatoes will also begin to grow in the country. 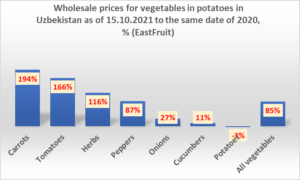 In addition to potatoes, all other key vegetables have risen in price on the Uzbek market. The prices for carrots have grown more than others – 3 times compared to last year. Despite the ongoing harvest of late carrots in the country, prices are not decreasing as fast as we wish. We have already covered the reasons for high carrot prices in this material, so we will move on to possible scenarios for the market in the future. Obviously, carrot prices in Uzbekistan cannot be significantly reduced, since they continue to grow in Russia, too. Perhaps, given the high prices, Uzbek vegetable growers will expand the area planted with carrots for the spring harvest. However, before the spring harvest begins, prices are likely to remain high and may even rise further.

We already wrote about the record prices for greenhouse tomatoes in Uzbekistan – prices are likely to continue to rise and disappoint consumers.

As for cucumbers with prices being only 11% higher than last year, one should also expect a sharp rise in prices. High global gas prices, a widespread reduction in greenhouse production globally, an increase in demand for cucumber supplies from other countries and expensive logistics can lead to a sharp increase in demand for Uzbek cucumbers in other countries. This, in turn, will lead to an increase in prices in the domestic market.

Prices for greens, primarily parsley and dill, also more than doubled. There is a good opportunity for the development of exports for Uzbekistan here. However, prices on the domestic market, as in the case of greenhouse vegetables, are likely to be high in the coming months. This is good news for producers and bad news for consumers.

Bell peppers are on average 87% more expensive than last year. It is notable that in neighboring Tajikistan the situation is the opposite – prices have collapsed, however, trade between the two countries is still very poorly developed. Otherwise, Uzbekistan would be able to take advantage of this by importing cheap pepper from Tajikistan for the domestic market and making good money on exporting its goods to Russia. The pricing prospects here are the same as for other greenhouse vegetables – record high prices will remain throughout the cold period of the year.

The fruit basket of Uzbekistan has risen in price less significantly over the year – only by 20%. The main reason for the growth was the sharp rise in prices for pears, the demand for which has dramatically decreased as a result of the rapid rise in prices. The average wholesale price for pears in Uzbekistan is now 2.3 times higher than at the same time in 2021 and a large price reduction is not expected, as pear prices in other countries remain high.

Other products from the fruit basket rose much less sharply. There were those that fell in price over the year, as well. 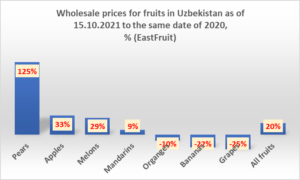 Table grape prices fell in Uzbekistan – they were on average a 25% lower than last year. We described the reasons in the article “Ranking of leading table grapes varieties in Uzbekistan gives no hope for export expansion.” As you see, our forecasts are coming true. Production is growing, and the demand for Uzbek grapes in the external market is falling. But local consumers should be satisfied.

Prices for imported bananas dropped by about the same 25%. Obviously, Uzbek consumers are buying more bananas and importers are improving logistics following the difficulties of last year’s lockdowns. Therefore, there is an increase in the efficiency of trade. However, banana prices are likely to rise in the near future as the global logistics issues are getting worse.

Also, wholesale prices for imported oranges decreased by 10% in Uzbekistan. The reasons are the same as for bananas. Mandarin rose in price due to the situation in key supplier countries.

Uzbek melons have risen in price by 29%. The higher price level is explained by the growth of melon exports and higher demand. However, this seasonal product is no longer an important part of the consumer’s basket, so its impact on the overall fruit prices will decrease.

Apples, the most important fruit for local consumers in the winter, have risen in price more than all other fruits, except for pears. Uzbekistan is a unique country in this regard, since apple prices have fallen sharply in most other countries. Therefore, despite relatively high apple prices on the domestic market, we do not expect their large growth in winter, as cheaper apples can be imported from China or Eastern European countries: Ukraine, Poland, Moldova, etc. We even receive reports of the first shipments of Moldovan apples to Uzbekistan, although their import to Uzbekistan usually starts in winter.

It is obvious that the rise in prices for many fruit and vegetables in Uzbekistan in winter can become an unpleasant phenomenon for local consumers, but can also be a good opportunity for the development of exports, which will lead to an increase in production and quality, and therefore stabilization of prices next year.