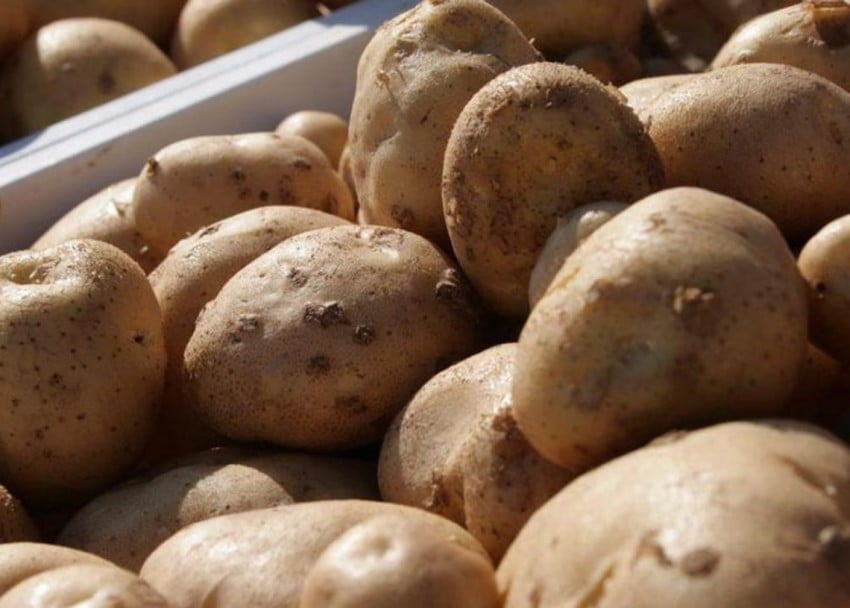 From early January to late November 2021, Uzbekistan imported 455.8 thousand tonnes of potatoes, EastFruit analysts report with reference to the Ministry of Economic Development and Poverty Reduction of the Republic of Uzbekistan. According to analysts, the volume of potato imports in 11 months of 2021 is 8% more than the total volume imported in 2020.

The previous record was set last year: according to EastFruit analysts, imports of potatoes to Uzbekistan in 2020 amounted to 421 thousand tonnes, which was in turn almost 1.5 times higher than in 2019. We remind you that potatoes have become the main import position of the fruit and vegetable sector in Uzbekistan over the past few years. The annual volume of potato imports did not exceed 50 thousand tonnes until 2017, and it has increased sharply since then. 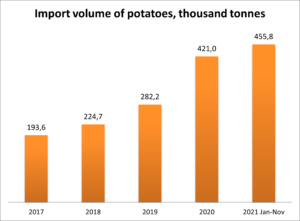 In 2021, the main suppliers of potatoes to Uzbekistan were Iran, Kazakhstan, Pakistan, Kyrgyzstan and the Netherlands, which together accounted for 95-99% of all imports.

The Plant Protection Agency of Uzbekistan reported on November 12, 2021 that cases of detection of especially dangerous pests – golden and pale potato nematodes in imported batches of marketable potatoes from Iran and Pakistan became regular from September 25, 2021. According to the State Statistics Committee of the republic, the total share of Iran and Pakistan in January-October 2021 accounted for 58% of the total volume of potato imports to Uzbekistan. The bad news was that 4250 tonnes of out of 110 thousand tonnes of potatoes brought to Uzbekistan from the beginning of August to November 11, 2021, were found to contain dangerous nematodes. Considering the needs of the republic in potatoes, The Agency for Quarantine and Plant Protection of Uzbekistan held online negotiations with the quarantine services of Iran and Pakistan. As a result, agreements were reached on strengthening quarantine supervision by Iran and Pakistan and providing them with lists of potato producers whose products meet the phytosanitary requirements of Uzbekistan.

There was another bad news on potato imports in early December. Kazakhstan introduces a temporary ban on the export of potatoes and carrots for a period of 3 months. This decision was made to address the deficit in the domestic market and stabilize prices. These restrictions become effective at the end of December. The share of Kazakhstan in the total volume of potato imports to Uzbekistan amounted to 29% in 9 months of 2021.

As a factor restraining further growth in prices for potatoes, the upper house of the Uzbek parliament approved a law on amending the Tax Code on October 21, 2021, which cancels the value added tax (VAT) on the import and sale of a number of products, including potatoes. According to the document, imports and sales of potatoes are exempt from VAT from October 10 to December 31, 2021.