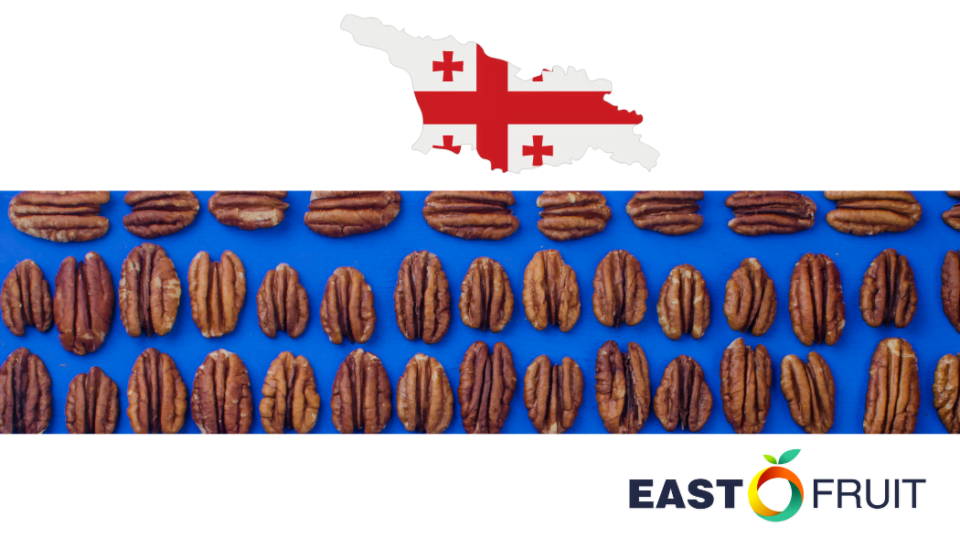 The EastFruit international team pays special attention to niche crops that allow small farmers to make good money, as well as the nut market. Pecan is 2-in-1 – it is both a niche nut that can grow in some countries of the region, and an unpretentious crop that can bring very good income even to small producers. Of course, there are many nuances in the pecans growing and processing business, which we will talk about with our experts today.

Are there pecans in Georgia?

Yes, in addition to the most popular nuts in the world – almonds, walnuts, hazelnuts and pistachios – the so-called “American nut” pecans also grow in Georgia. It was originally brought to Georgia as a timber crop, but now it appears that European hazelnut importers are also interested in Georgian pecans. Although there are no commercial plantations in the country yet, this nut is already harvested and processed for export to traditional markets – namely the EU countries and China.

What are pecans and why is it worth paying attention to?

Pecans are similar to walnuts visually and in their properties, but pecans are richer in fat. Pecans contain a large amount of monounsaturated fats (Omega-9), in particular, oleic acid, which helps to reduce the content of bad cholesterol in human blood and increase the good one. Pecans are widely used in cooking, added to pastries, desserts, fish, mushroom and even dairy dishes. However, pecans are also popular raw or roasted as a snack, added to salads, or mixed with other nuts and dried fruits.

Which countries are the leaders in the production and export of pecans?

The pecans are native to North America. In fact, two countries currently control the global production of these nuts. Mexico provides about 49% and the US about 41% of the world’s total pecan production. The remaining 8% are produced in South Africa (6%), Brazil (1%) and Australia (1%).

Naturally, the main exporters of pecans are Mexico and the United States, as well as South Africa, which supplies mainly inshell pecans. The top importer of Mexican pecans is the US. The top buyers of US pecan kernels are the EU and the UK accounting for 51% of shipments, and Canada, which bought 8% of all pecans exported from the US in 2019. Since the United States has a very large domestic market, more than 70% of pecans grown are consumed there. One of the largest importers of inshell pecans now is China.

Until July 2018, China was the largest importer of US pecans with a share of over 30% by volume. US pecan exports to China have been on the rise since 2006, and total pecans exports to China in the 2012/13 season reached nearly 37 000 tonnes. However, the trade wars between the US and China that began in 2018 resulted in a 47% import duty on US pecan exports to China, making them unprofitable. Thus, the largest trading partner of the United States has become one of the smallest with a share of less than 6% in the structure of pecan exports from the United States. As a result, China cut pecan imports by more than 80% in the 2018/19 season.

Although later deliveries to China were partially unblocked, the largest increase in demand is observed in the EU countries. Here are the most attractive prices for pecans, fluctuating in wholesale from 8 to 12 EUR/kg of kernels.

In what regions can pecans be grown in Georgia and why is it interesting for investors?

Georgia, which has significant experience in growing and exporting various nuts, has just begun to take the first steps in the commercialization of pecans production. Considering that the country successfully trades with both the EU and China under free trade agreements, the development of this sector can be promising.

Pecans has been growing in Georgia since the beginning of the 20th century. You can find trees on the Black Sea coast that were planted more than 100 years ago, as a pecans tree can live up to 300 years. The selection of adapted pecans varieties began in Georgia in the 1950s-70s, and scientific and practical work on pecans got a second wind in the early 2000s. Since pecans begins to bear fruit late, in 10–15 years, the results of this work have begun to be received only now.

The main area of ​​distribution of pecans in Georgia is the Black Sea coast – Abasha, Khobi, Samtredia, Kobuleti regions, as well as Lagodekhi in Eastern Georgia. These regions are characterized by a long growing season, and walnut yields can reach up to 50–60 kg per tree. Therefore, planning for the commercial production of pecans is advisable to start in these regions. However, it is also worth exploring and testing pecans in other subtropical microzones of Georgia.

According to Zviad Bobokashvili, Doctor of Agricultural Sciences, Head of the Fruit Growing Research Department of the Agricultural Research Center of Georgia, one of the bases for the commercial production of pecan is the organization of varietal production of grafted pecans seedlings. Pecans seedlings are usually used for rootstock. They are not produced in Georgia now, but there has been such experience.

Are there any prospects for the commercial production of pecans in Georgia?

“At this stage, it is important to understand not only how to produce, but also what to produce,” says Zviad Bobokashvili. “Pecans are a cross-pollinated crop, so highly productive adaptive pairs of appropriate varieties should be selected, which is the main prerequisite for the development of commercial production in Georgia,” said Dr. Bobokashvili.

According to the expert, at the first stage it is worth introducing and testing varieties that have been obtained by breeding over the past 20 years in the United States, such as Wichita, Pawnee, Navaho and others. After that, you can start the production and reproduction of pecans in Georgia.

There is a noteworthy experience of growing pecans in the state of Texas (USA) and in South Africa, where they are planted in intensive orchards. High-density pecans plantings can help overcome the problem of early commercial nut yields, as well as using a contour pruning technique that controls tree height. Indeed, with a traditional planting pattern of 12×12 m or 15×15 m, a pecan tree usually reaches up to 30-35 meters in height. On the other hand, this feature of pecan reduces the pathogenic load on the crop – some pests cannot reach the top of the tree and damage the crop.

“Since pecans are a relatively new crop for Georgia, and there are no concentrated industrial plantings of pecan in the country, few pathogens have been detected. This means that they can be successfully controlled,” Mr. Bobokashvili explains the benefits of growing pecans in Georgia. In addition, there is special equipment to spray tall pecans trees.

What are the advantages and disadvantages of pecans for Georgian farmers?

The main limiting factor in the development of pecans industry is a relatively low yield – 1.5-2.0 tonnes per hectare and a long period before entering full fruiting – 12-14 years with a traditional planting pattern. This makes pecans less of an investment-attractive nut crop when compared to hazelnuts, walnuts, almonds, or pistachios. At the same time, there is a positive experience of adapting it to the climatic conditions of Georgia and processing. Also, the pecans kernel yield is higher than that of walnut and reaches 55–58%.

In Georgia, pecans are harvested from November until Christmas. According to producers’ forecasts, current Georgia’s production potential is 150 tonnes of pecans per year. However, since there is no industrial production of pecans in Georgia, there is also no varietal gradation, which is desirable for export. Thus, it affects the export price.

How are pecans processed, dried, cracked and stored?

After harvesting, pecans are dried at room temperature and calibrated. The largest caliber is nuts with a diameter of more than 23 mm. Pecans are considered dry if they contain 6% moisture. Calibrated nuts should be stored in the refrigerator at a temperature above 0 degrees Celsius, as pecans quickly deteriorate due to the high oil content.

The shell of a pecan is harder than that of a walnut. At the moment, the only company in the country that cracks pecans is the Georgian Renaissance Group, which has invested in special equipment for pecans cracking.

The EastFruit team studied how pecans are harvested and processed for export at a facility in the village of Tela, Lagodekhi municipality, Georgia. The company buys mainly wild pecans from consolidators in the Kakheti region, calibrates, dries and cracks. After cracking, pecans are manually taken out of the shell, and kernels are vacuum-packed into polyethylene bags. In this form, pecans are exported in refrigerated containers.

What countries could be promising markets for the Georgian pecans?

The Georgian Renaissance Group exported the first batch of pecan kernels to the EU (Poland) in 2020. The European Union remains the target market for the pecan this year, but the company is also negotiating with Chinese importers who are interested in buying inshell pecans. According to Levan Bolkvadze, co-founder of the company, samples of nuts have already been sent to China and buyers are satisfied with the quality. However, Chinese buyers prefer uniform varietal composition of pecans, which is difficult to achieve now, when there are no commercial plantations of this nut.

There is also a high interest in pecans among importers from Russia, who buy inshell pecans from small farmers in Abkhazia and Samegrelo. This year, inshell pecans are sold at 7 GEL/kg ($2.27), which provides a good income for the local population.