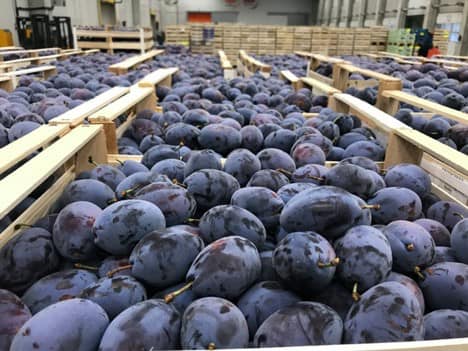 Thanks to the partnership between Moldovan producers and German importers, plums from the Republic of Moldova are gaining an increasing share in this market, and importers are looking for new Moldovan plum suppliers yearly.

According to the head of Moldova Fruit, the Association of Fruit Producers and Exporters of Moldova, Iurie Fale, the first plums from Moldova were sold to Germany in 2017. “At that time, 220 tonnes were exported, but the annual volume has constantly been increasing and exceeded 5 500 tonnes in 2021,” based on the Agricultural Market Information Agency (AMI) data in Germany. Shipments to Germany increased again in 2022, despite a smaller plum harvest due to late spring frosts. 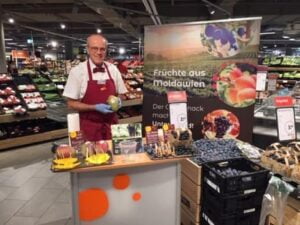 “Moldovan plum producers are reliable partners for us. Currently, 30 to 40% of the plums we import come from the Republic of Moldova. We are satisfied with the quality and appreciate that they meet all our requirements for delivery times. Moldovan apricots and grapes have their niche on the German market, but they need to be advertised so that German consumers know them,” writes Kurt Halder from OGA/OGV Nordbaden eG on his Facebook page.

Read also: TOP events in the fruit growing of Moldova in 2022: the collapse of hopes and plans, and the search for alternatives and opportunities

In recent years, more and more producers from the Republic of Moldova have received GLOBALG.A.P. and GRASP certificates for their fruits, which meet the requirements of partners in the EU. Three producers were certificated with SMETA this year for the first time. “In order to be competitive, Moldovan producers are improving their packaging and using production technologies with the utmost care to ensure the quality of fruits,” explains Kurt Halder. 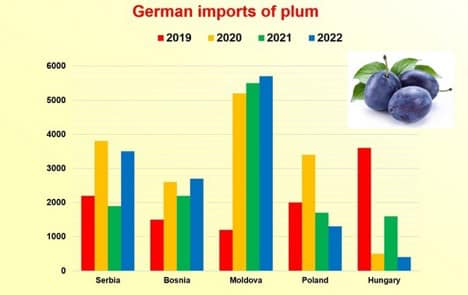 Despite the smaller plum harvest this year, logistical problems, and rising transport costs, producers from the Republic of Moldova met the delivery deadlines to all markets. The Moldovan plum season in Germany starts in mid-late September and lasts until mid-November, depending on availability and quality.

“With a cultivated area of about 20 000 hectares, the Republic of Moldova annually produces up to 100 000 tonnes of plums. The country produces more than a dozen varieties of plums, the most popular varieties for export being Stanley, Kabardinka, Chachak Lepotika, and President. Moldovan plums will be available from the beginning of July to the end of November,” says Iurie Fale.