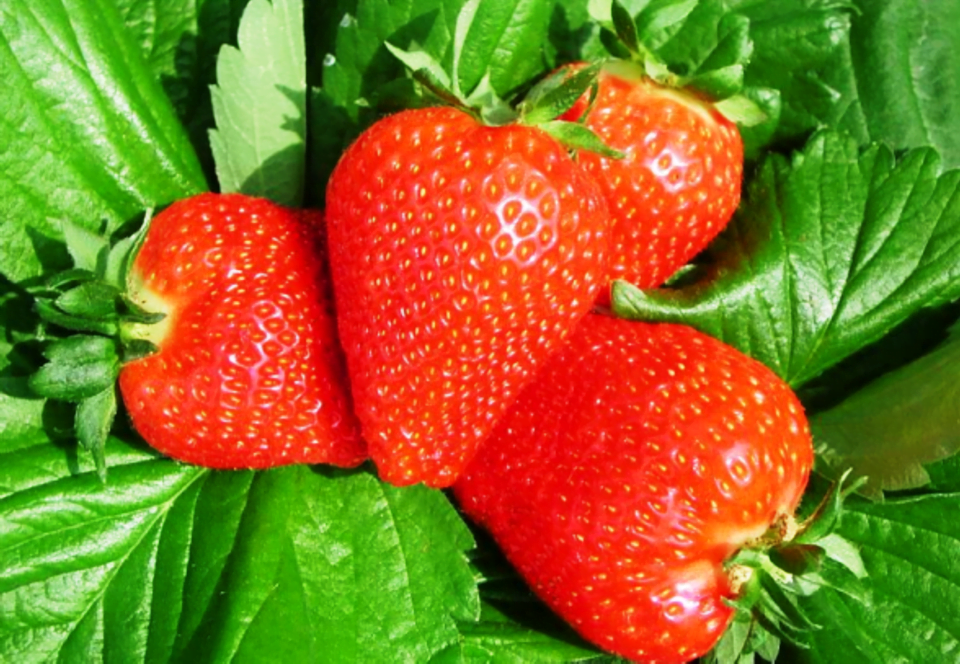 Home › News › Moldovan farmers do not cut their forecast for strawberry production yet, but fear smuggling and low export prices

Despite the cool and rainy end of May, strawberry producers have not yet cut their forecast for the harvest in 2021 (which is already low). Members of the Pomușoarele Moldovei Berry Producers Association believe that the rainfall forecasted for the entire first week of June will undoubtedly affect the production and market dynamics of the first month of summer. However, if precipitation is not too heavy, the rains will stop next week, moderately warm weather will set in and harvest will not decrease significantly. Additionally, it will be of an acceptable quality grade, at least in advanced farms.

According to statistics, berry harvest in Moldova has fluctuated within the range of 9-16 thousand tons over the past five years. In its structure, strawberries accounted for at least 60-70%. However, experts from fruit growers’ associations and donor organizations consider these estimates to be very rough. In this regard, they note that there are hundreds of hectares of strawberry plantations in the country, where relatively modern technologies are used and the yield from which reaches 15 t/ha. At the same time, the main share of strawberries is grown in households and in small farms, where the yield does not exceed 5-10 t/ha. According to expert estimates, strawberries are grown on more than 2 thousand hectares in Moldova and half of the harvest is sold on the domestic market. 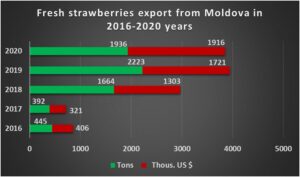 One of the main problems of Moldovan berry farmers is that over the past five years, the marketing period in the strawberry segment of the industry has remained very short – two to three months. Moreover, June has always been the most active sales period, both in dry and rainy seasons. On average, Moldovan berry growers export more than 900 tons of strawberries in June. According to expert estimates, strawberry sales on the domestic market exceed external supplies by four to five times or more this month. Export deliveries in May averaged 157 tons in previous years, and they fell sharply to several tens of tons in July-August. 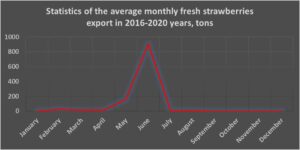 Compared to last year, the period of active supply of open field strawberries to the Moldovan market in 2021 is already at least two weeks late. Due to the rains at the beginning of June, the supply of strawberries is likely to be small, which is why the period of maximum sales is squeezed into an even narrower and tighter framework.

However, it is likely that the price reduction which started in the last ten days of May will slow down. Last weekend when there was no significant precipitation, the price of strawberries in the wholesale markets of Chisinau dropped by the end of the day to 27-30 MDL/kg ($ 1.51-1.68/kg), in the capital retail – up to 50 MDL/kg ($ 2.8/kg). However, given the unfavorable weather forecast, market operators admit that wholesale prices are likely to return to the level of 35-40 MDL/kg ($ 1.96-2.24/kg) in the first week of June. However, they also assume that the June export of open field strawberries will start from low prices – close to $ 1/kg. However, judging by the statistics of previous years, this is not the worst option. 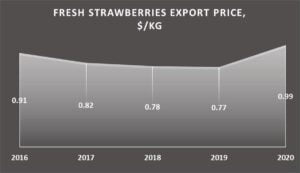 Another important fact is that according to the data of the customs department, the maximum imports of strawberries falls on April-June.

Wholesale prices for imported strawberries are usually well above the local export prices. But it is worth considering that the country imports mainly relatively expensive Greek greenhouse strawberries in spring. In the past few years, during this period, about 500 tons of strawberries have been imported to Moldova from Greece. 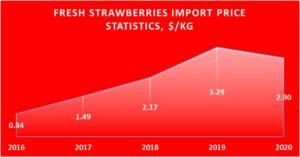 In May-June, the Moldovan market also officially imports about 450 tons of Ukrainian open field strawberries at an average declared price of $ 1.16/kg.

However, official data do not reflect the real situation as supplies from the neighboring country are significantly higher due to smuggling, especially in June (the only exception was the last season of severe restrictions on food markets due to the pandemic). In June 2021, operators of the Moldovan berry market fear an increase in smuggling supplies of Ukrainian strawberries.

Moldova exported potatoes to North Macedonia for the first time!