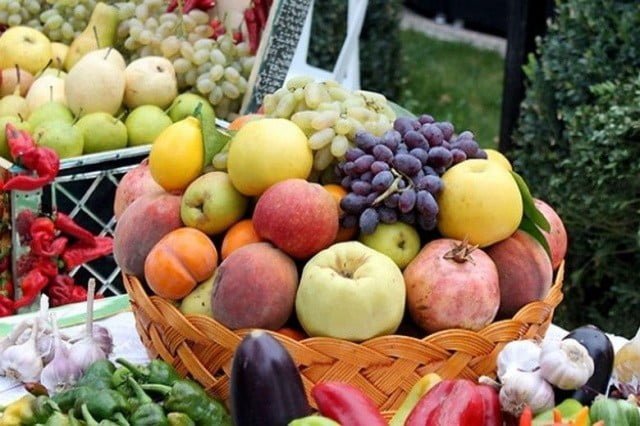 The list of the 25 largest world exporters of fruits and nuts does not include a single country in Eastern Europe and the former USSR. Poland appears at 26th place, which in 2019 gained about $1.26 billion from the export of fruits, berries, and nuts. Uzbekistan is in 37th place with Moldova ranking among the top 50 exporters. We are not taking Azerbaijan into account, which is slightly higher than Moldova, since significant volumes of this country’s exports are re-exports of fruits and nuts from Iran and some other countries to Russia. Also of note is that Turkey occupies 7th place in this ranking exporting fruits, berries, and nuts totalling $4.2 billion.

Why then did we write in the headline that Moldova exports more fruits and nuts than Turkey?

EastFruit decided to look at the world export rankings more equitably since all countries vary in size and population – the larger a country’s population, the more people available for cultivation and export. With our ranking, we hoped to demonstrate how important fruit exports are for each of these countries. Therefore, EastFruit analysts calculated the world rating of exporters of fruits, berries, and nuts in terms of export earnings per capita.

It turns out that the revenue from the export of fruits, berries, and nuts from Moldova is about $88 per resident. In fact, it is probably much higher. We used official data regarding Moldova’s population, but some say this indicator is overestimated due to mass labor migration.

Interestingly, Turkey has an export rate of fruits and nuts per capita of only $51 per resident, while Uzbekistan – leader of fruit and nut exports of the former USSR – has only $20 per capita. It is important to note that part of Uzbekistan’s export volumes are still not accounted for in official statistics, but even so, it cannot compete with Moldova in this indicator. 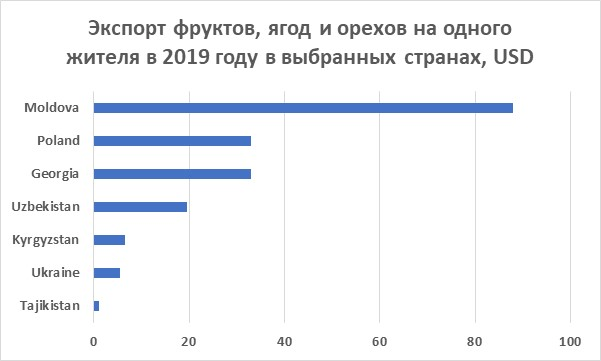 Meanwhile Georgia, which we often criticized for very low volumes of fruit exports (despite the excellent conditions for growing fruits, berries, and nuts), averages out to be approximately $33 per resident, which is 68% more than Uzbekistan! The reason lies in the high revenues from the export of hazelnuts. In terms of the volume of exports of hazelnuts and before the stink bug outbreak, Georgia ranked second in the world after Turkey and still receives large volumes of revenue.

We did not include Belarus in our rating since this country is mainly engaged in re-export like Azerbaijan as well as importing countries.

Our ratings partly speak to export development potential as well. For example, Ukraine has enough land resources and population to export significantly more fruits and nuts than their current $5 per resident, which is 16 times less than Moldova exports. However, Ukraine has enormous potential since it borders the European Union (the largest sales market) and also has access to the sea unlike Uzbekistan.

As for the great successes of Uzbekistan, we must understand that this country has significantly more growth potential. After all, similar small and remote countries like Chile export fruits, berries, and nuts worth $309 per resident! This is 16 times more than Uzbekistan and 57 times more than Ukraine!

However, it is not only climate, availability of land, and large populations that serve as deciding factors for success. The most important thing in the produce business is marketing and The Netherlands is a perfect example. The country exports $478 worth of fruits, berries, and nuts per resident, which is more than any other country in the world. Yes, this is largely re-export, but the export of our own products remains very high at the same time.

Let these numbers serve as an example of what you can and should strive for.