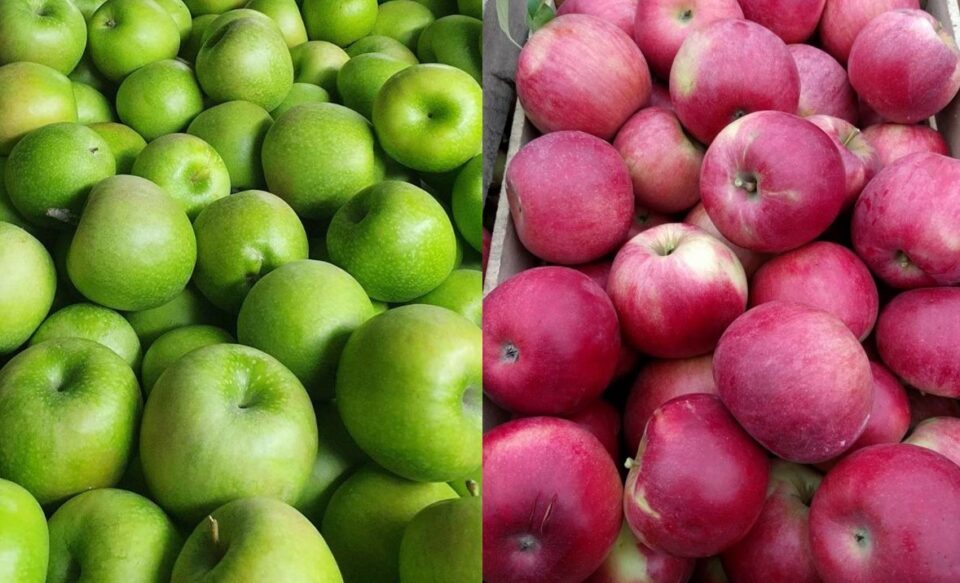 Home › News › Is the domestic apple market in Moldova worthy of attention from Moldovan traders?

Is the domestic apple market in Moldova worthy of the attention of Moldovan traders? At first glance, this question is not meant to be rhetorical or even provocative. Reality is always complex and diverse. EastFruit analysts tried to give an objective answer to summarizing the facts and opinions.

The capacity of the Moldovan dessert apple market was estimated by experts from local agricultural producers associations in the past decade at 40,000-50,000 tons. In some years of this period taking into account active labour migration, the population of the country changed. Also, apple production fluctuated widely from 308,000 tons in 2015 to 665,000 tons in 2018. Both of these factors apparently influenced the supply and demand for fruit in the domestic market. However, according to market operators, this has not been converted into an increase or decrease in the sales volume of apples in Moldova, plus or minus 5,000-7,000 tons per year. Unfortunately, there is no more accurate (statistical) information on the level of sales and consumption of dessert apples by the population in the public domain.

According to the Ministry of Economy and Infrastructure, fruit consumption was 54 kg per capita in Moldova last year. It can be assumed that apples account for at least half of this production.

One way or another, one could assume that the number of apples for domestic consumption is not a small piece of the pie both in absolute and in relative terms. For example, the estimated physical capacity of the domestic apple market is comparable to about half to one-fifth of the annual Moldovan apple exports (99,000 tons in 2015; 262,000 tons in 2019).

It is also worth considering that in the past two or three years, the centre of gravity of fruit sales in Moldova has shifted from open wholesale and retail markets to supermarkets and convenience stores. According to expert studies, approximately 60% of Chisinau residents prefer to buy fruits and vegetables in stores rather than in markets since 2019. The catalyst for this process last year was more or less strict restrictions on the operation of open fruit and vegetable markets, which were in effect for seven months, including the most stringent ones in the first half of the year.

It is also important to note that the largest supermarket chains in Moldova in terms of sales prefer to either import a wide range of fruits, including apples or cooperate in this area with importing traders. Representatives of the Moldovan retailers’ association claim that last year local fruits accounted for no more than 30% of the goods sold by the produce departments of supermarkets.

The Federation of Agricultural Producers of Moldova (FARM), citing data from the customs service, reports that in the last five years, the import of apples to the Moldovan market ranged from 1,000 to 8,600 tons. Moreover, the largest physical volumes of imported apple supplies were noted during those years when the harvest of these fruits in Moldova were the largest (665,000 tons in 2018 and 610,000 tons in 2019). By the way, apple exports in these years were also at the maximum of almost 250,000 tons and 262,000 tons respectively. 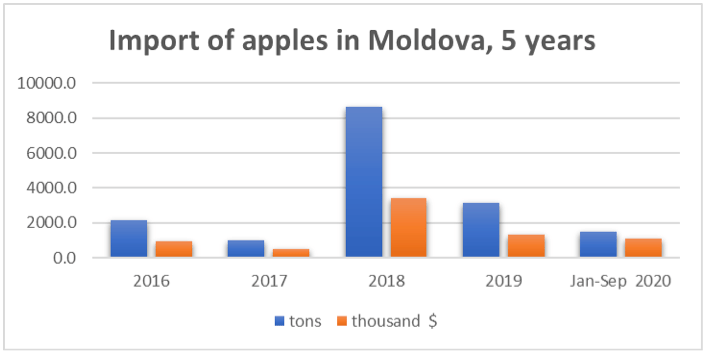 We assume that in those peak years, the relatively expensive local apples were exported and were replaced in chain supermarkets with relatively inexpensive imported apples on the Moldovan market. In 2018-2019, the average wholesale price of apples imported to Moldova was $0.40-0.42/kg while in 2016-2017, which were years of relatively low yields (412,000 and 439,000 tons respectively), the average wholesale prices of imported apples reached the level of $0.44-0.50/kg. 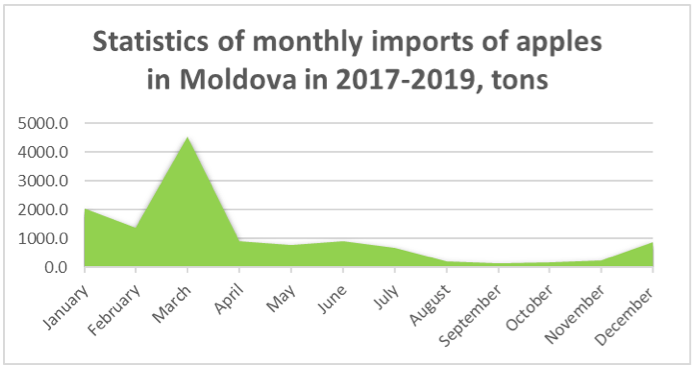 Imports of apples to Moldova has a pronounced seasonal character. The high period of apple imports into the country coincides with the period of the most intensive exports of Moldovan apples, which is from January through May.

In this context, the situation of 2020 looks somewhat anomalous. In the first half of the year, despite logistical disruptions due to the spread of COVID-19, apple deliveries to the country from February to June still remained at a relatively high level (172-413 tons per month) despite the decrease in physical terms compared to the same period in previous years. However, contrary to the trend, imports did not decline but increased in September. As EastFruit reported, local chain retailers explained this by the fact that there was a shortage of high-quality local apples on the domestic market of Moldova. As a result, some Moldovan supermarkets imported apples at a price of about 11-12 lei/kg ($0.66-0.71/kg) for almost the same amount of money that Moldovan apples of the best export quality were wholesale at that moment. 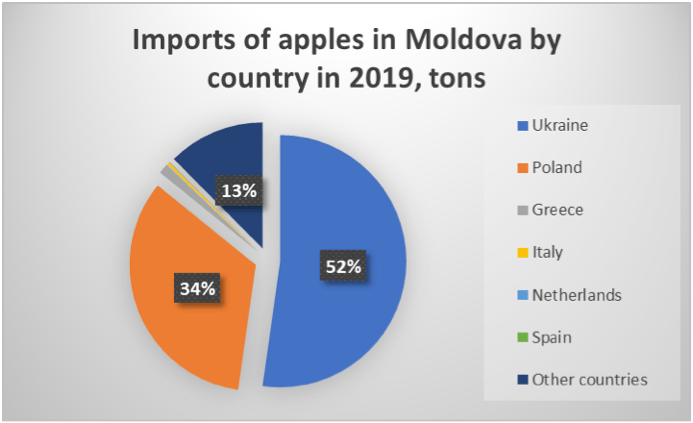 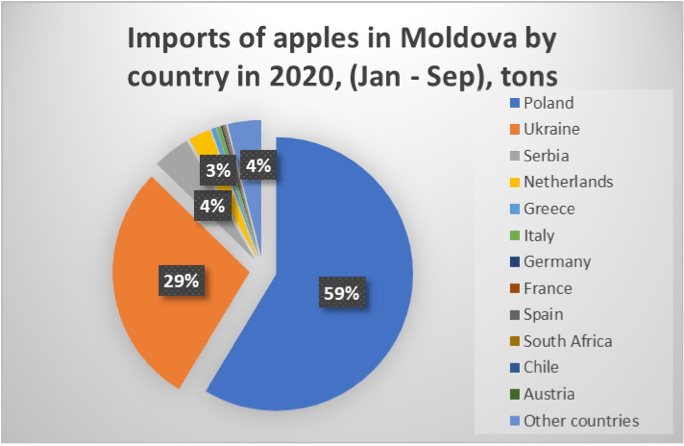 There is an interesting nuance from last year. If Ukraine was the largest apple exporter to Moldova, then in three quarters of 2020 this role passed to Poland. However, supplies of Ukrainian apples have increased since October. Again, some chain retailers have purchased low-quality Ukrainian apples at a price comparable to the price of an export-quality Moldovan apple. According to the results of 2020, and preliminary estimates of agricultural producers’ organizations, apple imports to Moldova approached the level of 6,000-7,000 tons.

To paraphrase the question from the title, why have Moldovan traders ignored the domestic market? It is not such a small sales channel after all. 6,000-8,000 tons is the monthly export volume of Moldovan apples last autumn.

According to produce market operators, there are two main reasons. Large horticultural exporters continue to view the domestic market as a lot of small farmers since, for such trading companies, the monthly volume of products purchased by one large supermarket chain is, at best, their daily export volume. In turn, retailers have repeatedly become convinced that numerous small-scale Moldovan farmers are not able to provide a stable supply of even relatively small volumes of sorted products that are uniform in quality and variety. As a result, it is more convenient for chain markets to deal with intermediary importers (who, moreover, are ready to issue a wide assortment of fruits and vegetables), or import fruits centrally and independently.

Is there a way out of this situation? Perhaps imported apples (as well as plums and grapes) in the Moldovan retail chain could be replaced by one large Moldovan company with a wide range of fruit products and be the first to negotiate with most local supermarket chains.

“The Georgian hazelnut would be in high demand in the US if...

Apple harvest in Moldova will be significantly higher than last year but...