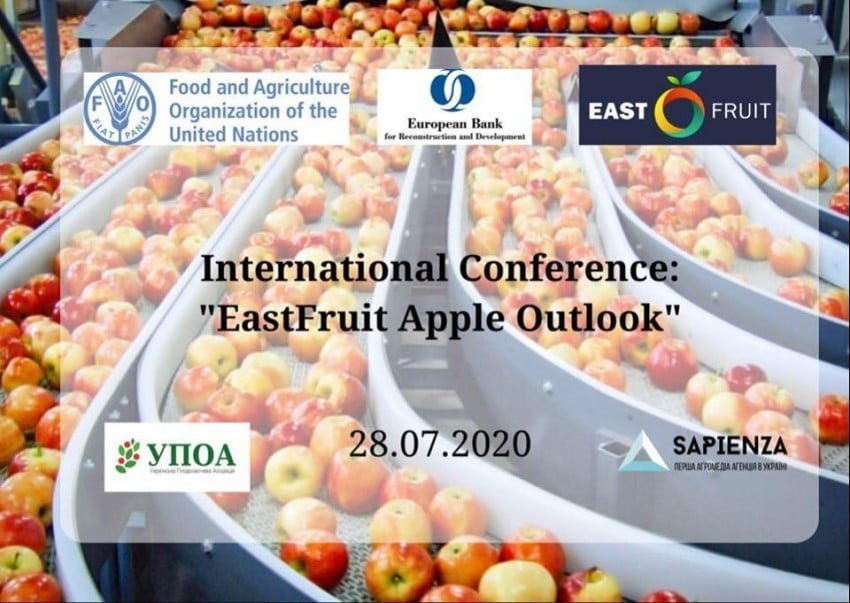 Will global demand grow as fast as apple production in the 2020/21 season? Prices on the domestic market of Ukraine, Moldova, and Serbia are now at their peak, what will be the situation in the coming months? What’s in store for apple growers in the 2020/21 season? These and other topics were discussed during the International Conference “EastFruit Apple Outlook”, which took place on July 28, 2020, and was organized by FAO, EBRD, and the EastFruit project with the support of industry associations from Ukraine, Moldova, and Serbia. (The full video of the conference in English can be viewed here).

“When investing in apple orchards, you need to clearly understand that this is a “red ocean”

“The global trend of the apple market over the past five years is a decline in world apple trade in physical terms by 3.8% annually. At the same time, apple production in the world is growing by 1% every year, despite the recent increase in the negative impact of weather factors. All over the world, work is underway to grow and adapt varieties to conditions atypical for apple orchards. Today the apple business and apple export are the “red ocean”. Therefore, if you plan to invest in apple orchards, you need to clearly understand why you are doing this and what advantages you have over your competitors,” said Andriy Yarmak, an economist at the Investment Department of the Food and Agriculture Organization of the United Nations (FAO) during the conference.

The economist notes that in developing countries, the advantage is lower labor costs. However, it is necessary to take into account such important parameters for the consumer as quality, safety, appearance, caliber, and taste of the product. 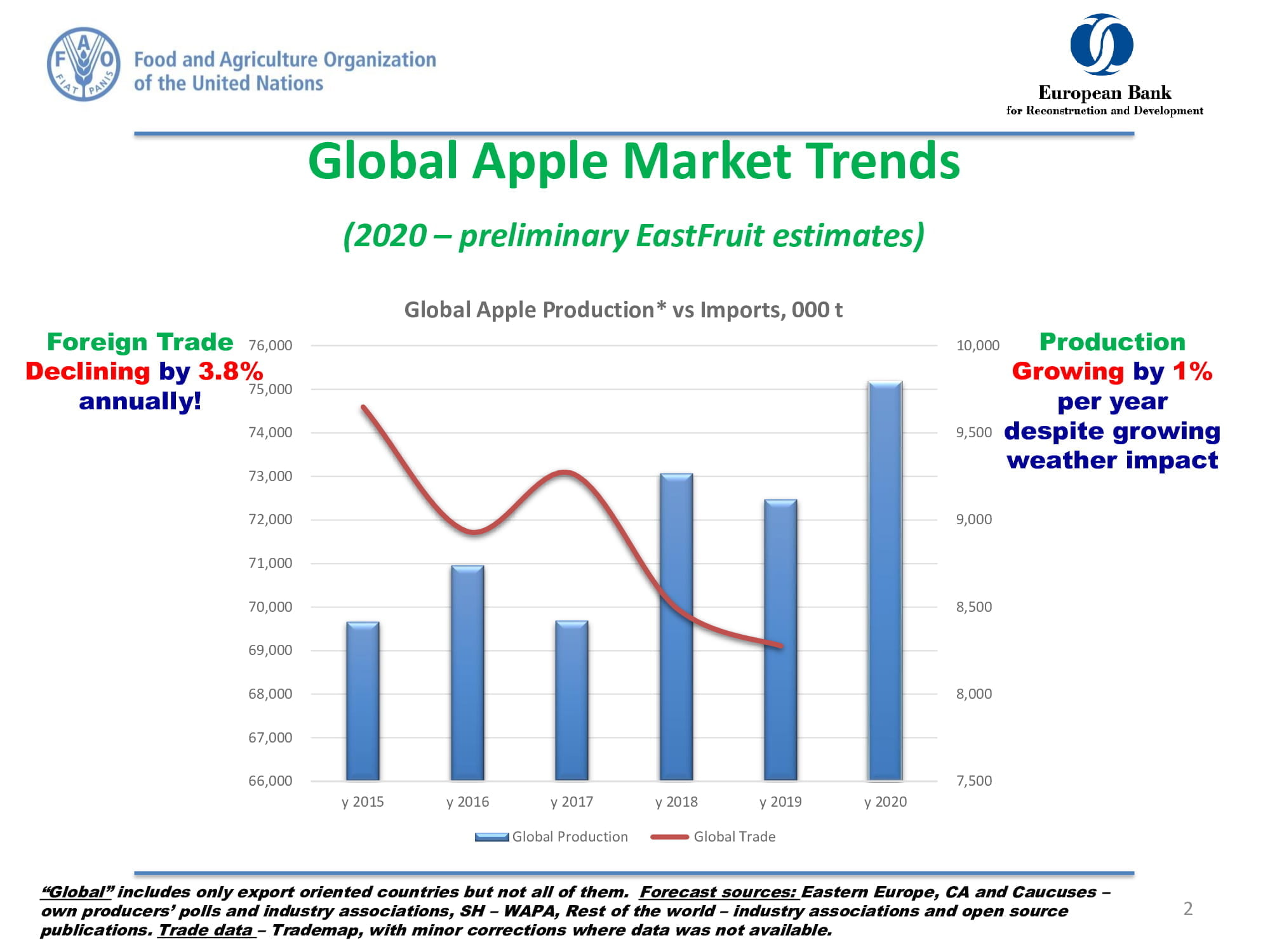 As Andriy Yarmak notes, Serbia, Moldova, and Ukraine show the fastest growth rates in production and exports among all countries in the region. However, apple production in the United States, for example, is growing almost as fast as in these countries. China is the growth leader in terms of increased volumes, and Iran and Turkey are slowly becoming very important and global players. There is not much information about apple production in Iran, and therefore, the participants in the apple market often underestimate the capabilities of this country, having little idea of ​​the real volumes of production and export of Iranian apples.

Ukrainian gardeners this year focus mainly on the domestic market

The manager of international projects “APK-Inform: Vegetables and Fruits” (Fruit-Inform) Evgeniy Kuzin during the online conference described the current state of the Ukrainian market and made forecasts regarding its future development.

“The weather conditions for apple producers in Ukraine this season were more favorable than a year earlier. Problems such as hot summers and spring frosts had a negative impact mainly on less intensive gardens,” notes Evgeniy Kuzin.

He also emphasizes that according to the forecasts of APK-Inform: Vegetables and Fruits, the volume of export-quality apple production in Ukraine in 2020 will be higher than in the previous season, but lower than in 2018, when a record amount of high-quality apples was produced. It is expected that this season in Ukraine will be produced about 1.2 million tons of apples. For comparison: in 2019, production was at the level of 1.15 million tons, and in 2018 – 1.5 million tons.

According to Evgeniy Kuzin, Ukrainian gardeners this year focus mainly on the domestic market due to the high prices for apples in Ukraine. However, according to his forecasts, apple exports this season will be higher than a year earlier, but lower than in the 2018/19 season. And here a lot will depend on the quality of the apple at the harvesting stage in August and September.

Evgeniy Kuzin also focused on the Russian apple market. According to Fruit-Inform, currently, in Russia, many gardeners expect the decline of apple production due to unfavorable weather conditions. On the other hand, huge areas of new intensive orchards are being laid in this country, many of which are beginning to bear fruit this year or are increasing. And only the intensive new gardens have been minimally affected by weather disasters.

He also emphasizes that apple imports to Russia have been declining for the second season in a row. At the same time, the country is still dependent on imports and imports about 850 thousand tons per year, despite the upward trend in domestic production.

Andriy Yarmak also added that the official statistics of the Russian Federation are very different from the real state of affairs in the production and import of apples to Russia. This is primarily due to the specifics of trade within the EAEU when not all volumes entering the Russian market through partner countries are reflected in official statistics. 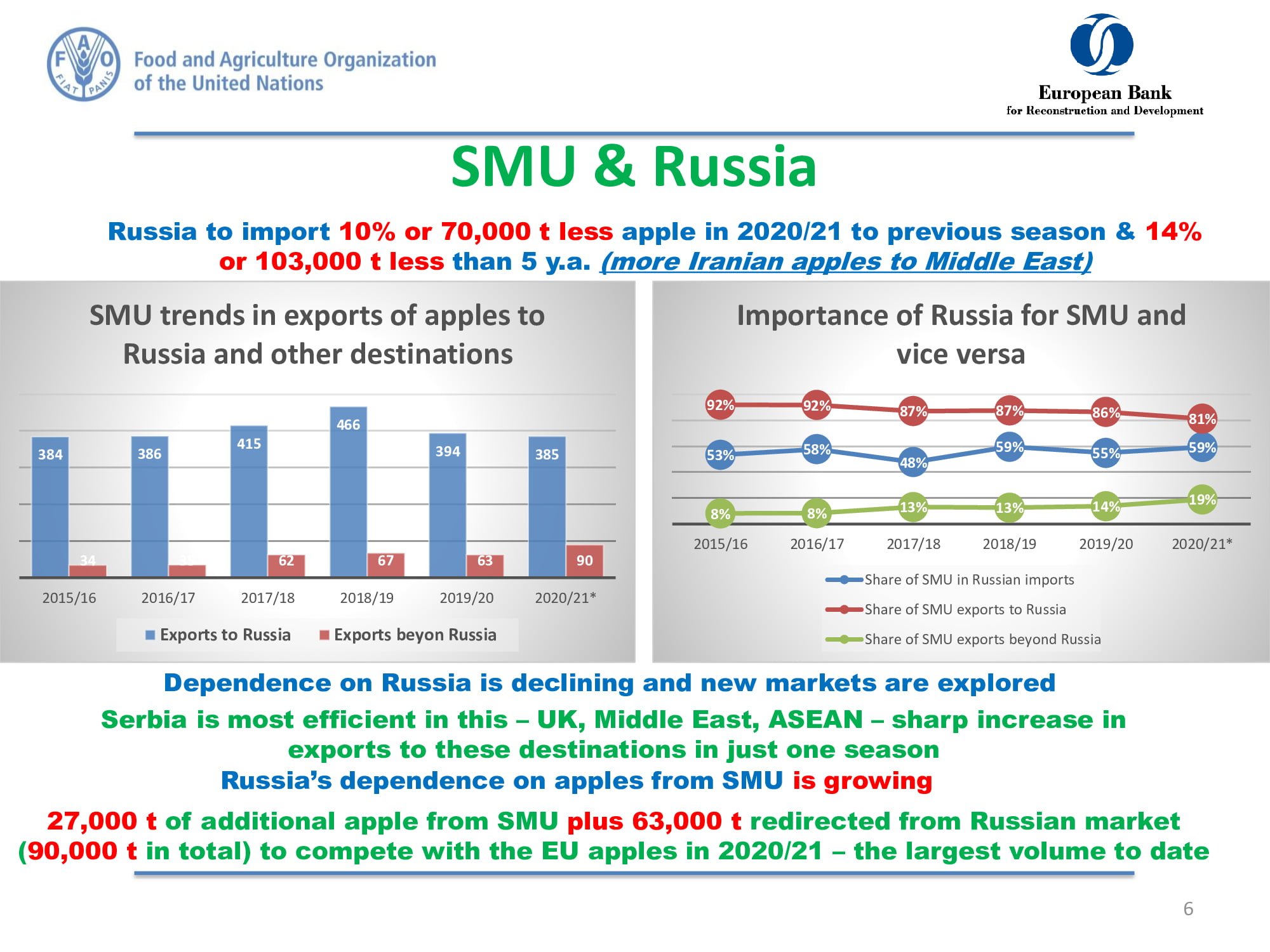 During the conference, Yulka Toskic, Manager of the Serbian Does Apple Association, spoke about the situation on the Serbian market.

“In Serbia, the current season was influenced by the situation related to the COVID-19 pandemic. At the same time, export results are strong. Prices on foreign markets for Serbian producers this year are satisfactory, and therefore the bulk of apples were sold, and a small one remained in storage. If we talk about the apple harvest volumes that Serbian gardeners expect to receive in the current season, then, according to preliminary forecasts, they will amount to half a million tons,” the representative of the Serbian profile association notes in her speech.

At the same time, according to Yulka Toskic, as in many other countries, apple producers in Serbia this year faced weather disasters – spring frosts and summer hail, which will have a certain impact on the future harvest. This, in particular, is due to the fact that not every manufacturer has hail protection systems installed.

If we talk about the geography of exports, the Russian market is still the main one for the sale of the Serbian apple. However, several years ago Serbia began the process of export diversification and today the country supplies apples to 40 countries of the world, which have different requirements for varieties and product packaging.

Yulka Toskic also emphasizes that Serbian producers should pay attention to finding new markets where the price of a quality apple will be even more attractive. As an example, she cited the UK market, which in the 2018/19 season turned out to be attractive for Serbian apple exporters for its pricing policy.

The manager of the Serbian Does Apple Association, in turn, notes that the countries of Eastern Europe remain interesting for Serbian producers. In addition, producers hope that in the near future the Serbian government will make decisions regarding the trade of Serbian products on the Chinese and Indian markets, which are also attractive for the supply of Serbian apples.

At the same time, according to Andriy Yarmak, despite the fact that India is an attractive destination for export, it is not easy to work with this country today. As an example, he cited the uncertain situation with the supply of Ukrainian apples to India. Thus, trial deliveries of apples were carried out without any significant remarks more than a year ago, however, the Indian side did not give a final answer regarding the opening of the market for Ukrainian products.

As EastFruit notes, the Ukrainian Horticultural Association (UHA) has been dealing with this issue for the second year in the hope of clarifying the situation, since the number of requests for the supply of Ukrainian apples from importers from India is constantly growing.

Igor Gorashov, the owner of the Moldovan company Gigacom LLC, engaged in the production and supply of fruits, during the conference shared his opinion on the development of the Moldovan apple market this year.

“Today, 50 thousand hectares are occupied by apple orchards in Moldova. And the trend of the new time is the replacement of ineffective old gardens with new intensive gardens using modern technologies. Farmers have finally realized the benefits of super-intensive production technologies. And it’s not only about the economic effect but also about the technical possibilities of obtaining the best varietal apple of a certain caliber and quality with less manual labor, as well as the use of weather protection, which is available in intensive orchards,” says the owner of the Moldovan fruit company.

According to Igor Gorashov’s forecasts, in 2020, Moldovan gardeners will produce about 700 thousand tons of apples. At the same time, he notes that the apple of green varieties is losing its position in the market, while apples of such varieties as early “Gala” and red apple varieties remain popular.

He also emphasizes that in recent years Moldova has not only been actively growing apples but also has been increasing its storage and processing capacities. “In addition, local producers are working to improve the quality of their products, giving priority to quality over quantity,” says Igor Gorashov.

Andriy Yarmak, making forecasts regarding the development of the apple market in Serbia, Moldova, and Ukraine in 2020, notes that the production of these fruits in these countries will increase by 3.6% or 80 thousand tons compared to 2019. 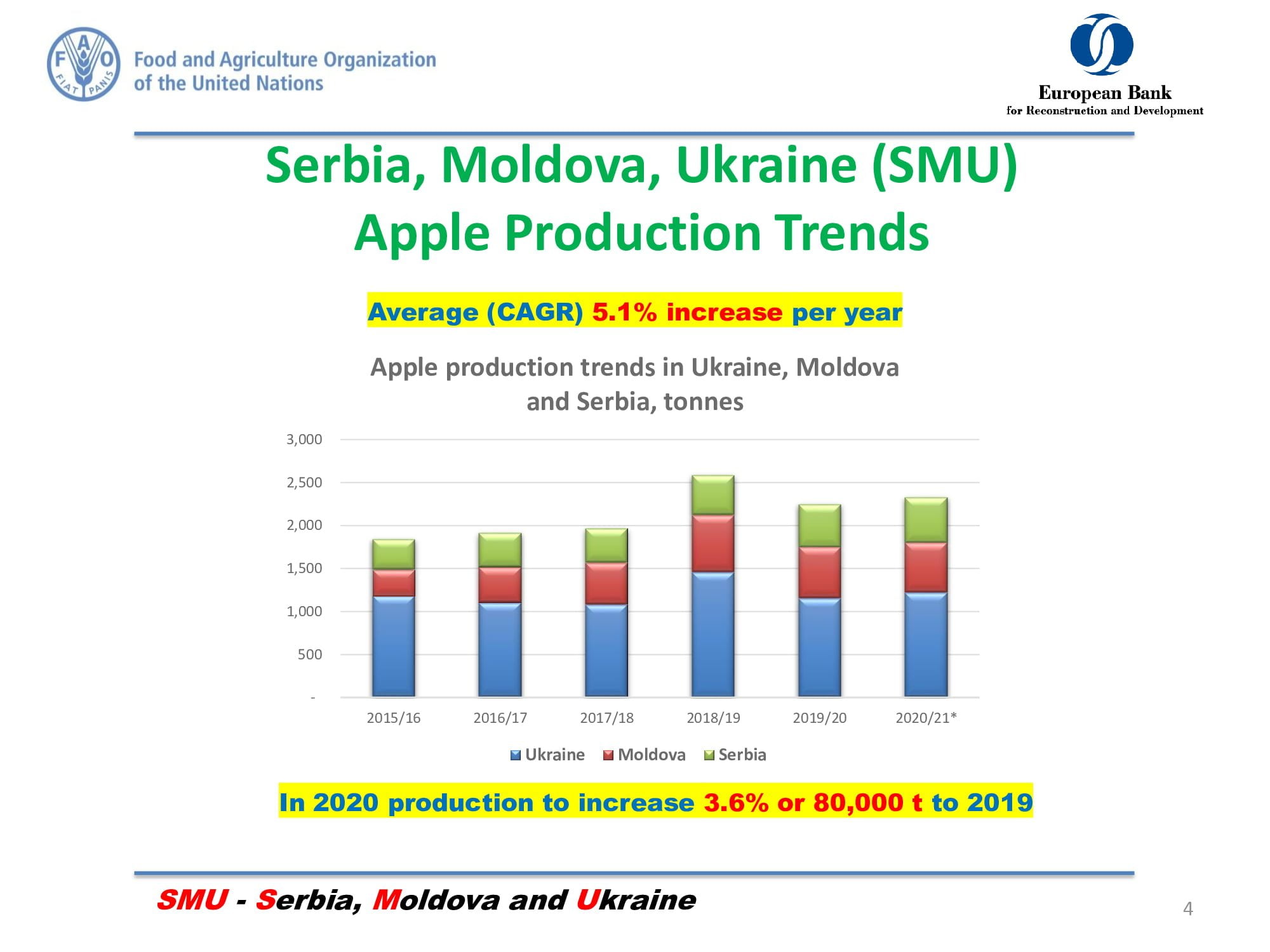 He also drew attention to the fact that, despite the likely decline in apple exports from Moldova (although experts from Moldova believe that apple exports will not decrease despite the decline in harvest), the three countries will jointly export a record volume of apples, if not take into account deliveries to the Russian Federation. The increase in the export volume of apples outside Russia from these three countries will reach 90 thousand tons in comparison with the last season, and this apple will directly compete with apples from the EU countries and in the markets of the EU countries as well.

He also drew attention to the fact that an unrepresentative survey conducted by the EastFruit project among apple producers and exporters in Eastern Europe showed that gardeners expect prices to rise by an average of 6.5% compared to last season. At the same time, more than half (56%) of respondents are sure that apple prices this season will be higher than in the past, and only 32% believe that prices will decrease. 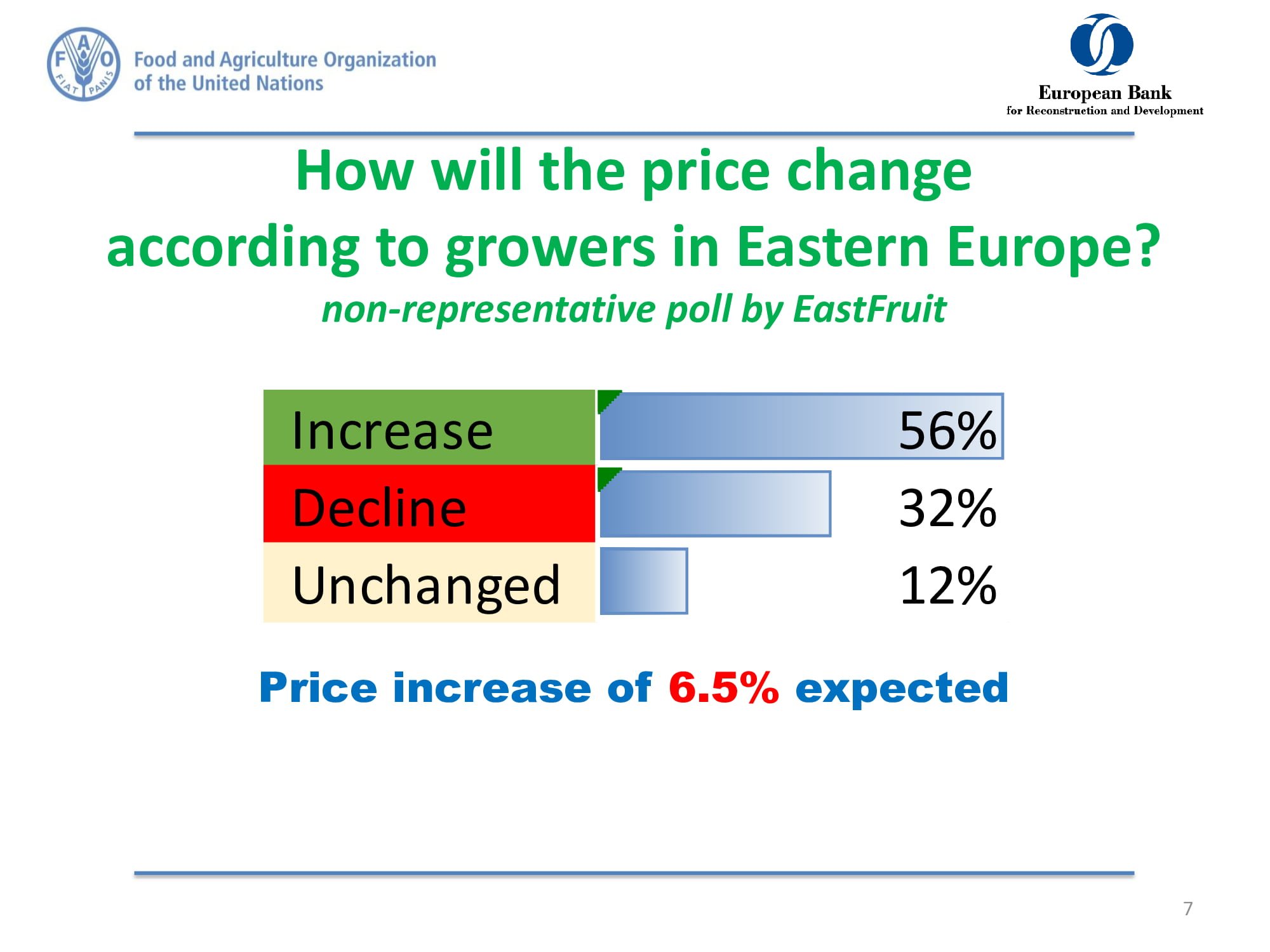 However, according to Andriy Yarmak, although the demand for apples increased sharply during the COVID-19 pandemic in a number of countries, in others it, on the contrary, decreased. He also draws attention to the fact that for two years in a row in Ukraine and the EU countries, the spring was quite cold, which led to a delay at the beginning of the ripening season of berries and even the loss of a significant harvest of berries and stone fruits, in particular cherries. This also contributed to an increase in the apple consumption season and stimulated prices in May-June, when usually apples are no longer in high demand.

“Therefore, it is not yet clear whether the higher demand for apples will be sustained or whether the trend towards increased consumption of alternative products such as berries and exotic fruits will return,” says the FAO economist.

In addition, Andriy Yarmak notes that many countries where apples are exotic fruits may reduce imports due to lower consumer incomes. After all, in Europe, the apple is the cheapest fruit, but in the countries of Southeast Asia and Sub-Saharan Africa, where consumption has grown rapidly in recent years, the apple belongs to the category of expensive products.

In addition, global apple production could be even higher than the record level in 2018. Therefore, if production does not turn out to be much lower than currently expected, prices may well disappoint growers in Eastern Europe, the EU, and Central Asia.