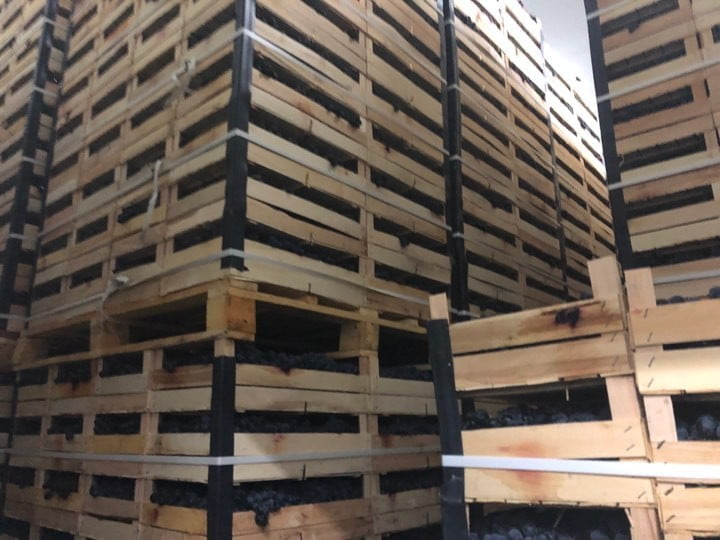 Our first article detailed the positive outcomes for the Moldovan village of Costesti and factors leading to their farmers’ success and cooperation. Our second article focused on the technologies for growing and pruning table grapes, including why table grape growers are switching to pergola technology, using special film to cover grapes to protect from rain and hail, and using greenhouses to grow early grapes. In this third and final installment of our series, we will discuss in detail the technologies for storing grapes in refrigerators, size of refrigeration chambers, types of containers and packaging, and demonstrate what a fully automatic production line of veneer boxes looks like.

As you may recall, the 12,000 residents from the Moldovan village of Costesti generates about $30-40 million in proceeds from the sale of grapes, plums, cherries and other fruits and is actively developing cooperation. Their construction of refrigerators for storing late grapes and plums in the village, according to the Head of the Moldovan Table Grape Producers and Exporters Association Ion Sula, began only 15 years ago. Many mistakes were made back then. One of the most common beginner mistakes is building very small refrigerators. As a result, the cost of storage is too high, which negatively affects the return on investment.

Andriy Yarmak, economist at the FAO Investment Department, notes that at the first stage of refrigerator construction for storing table grapes and fruits in Moldova, they were built not by producers, but by resellers and traders who bought table grapes cheaply during harvesting, stored them, and then sold them when it rose in price. This business worked great while the number of storage facilities was insufficient, but it gradually became less profitable.

“The storage for fruits and vegetables is not a separate business, but an integral part of the business of growing and selling fruit and vegetable products. When I say this, especially in countries where refrigerators are in short supply, many grin and they say, ‘we know better – we personally make good money on this.’ However, over time, the storage only grows, and this business dies. Therefore, storage facilities inevitably pass into the hands of producers and their cooperatives. Now, if you grow apples, plums, grapes, onions, potatoes or any other vegetable or fruit subject to long-term storage on an industrial scale, then you simply have to consider not only the cost of planting an orchard or vineyard per 1 hectare, but also the cost of storage per 1 hectare… Moreover, it is necessary to layout the cost of the business as well as the line for sorting, processing and packaging products. And these investments, in most cases, are more than the cost of planting a garden, which makes the cooperation of farmers even more urgent,” states Andriy Yarmak.

During our 2019 study trip to Moldova, EastFruit experts managed to visit the Eco-Fruit Farmers Cooperative. Cooperative members jointly store and sell their produce and provide storage services to other farmers. The cooperative has its own modern storage facility, its own sorting and packaging of products, as well as seven trucks to independently deliver products for export and to consumers in the domestic market. In Moldova, the state returns 50% of investments in storage facilities to cooperatives from the budget, but only after the project is put into operation.

The six members of the cooperative grow not only table grapes, but also plum and cherry orchards. Cherries are sold after refrigeration and plums after storage. In the cooperative’s fruit storage, each chamber holds 80 tons of products, which is equal to four truckloads. In addition, there are specially equipped pre-cooling chambers where 20 tons of grapes can be cooled at a time.

In the video below, you will see what the pre-cooling chamber looks like and how grapes are stored in Moldova.

Fast cooling is achieved thanks to special fans that direct the flow of cold air and remove warm air outside the chamber. The grapes are cooled from approximately 40 degrees Celsius down to 4-6 degrees in just four hours. Then, the grapes are cooled even further to zero degrees in order to be stored for a long time. Additionally, different programs and storage modes are used for different varieties of table grapes.

The modern consumer is more willing to buy table grapes if the branch remains green even after storage because it’s viewed as an indicator of the freshness of the product. Accordingly, the same requirements are imposed by supermarket chains and importers. Therefore, in order to keep the branches green, local producers are actively adapting growing technologies and storage regimes. Also, they are using special bags with sulfur to prevent the development of fungal diseases on grapes.

The use of bags with sulfur for storing grapes is a fairly new trend in Moldova, despite the fact that they have been used for a long time in Central Asian countries as well as the United States and Chile. The vast majority of producers in Moldova use the older method where treatment with sulfur dioxide is carried out directly in the chambers every week. After processing, sulfur dioxide is discharged outside the chamber through special pipes to avoid corrosion of sandwich panels and refrigeration units.

However, the cooling units in the chambers still suffer from sulfur leakage. To prevent the units from corroding, stainless steel is used in Moldova. Although they are expensive, they provide durability to refrigeration equipment.

The grapes are usually harvested in veneer or plywood boxes. The grapes are stored and shipped to consumers in them as well so the need for such boxes in the village of Costesti is very high. EastFruit managed to see a fully automatic line for the production of veneer boxes in operation. The cost of a new line, according to experts, is estimated at around 300,000 euros. Such lines are used in EU countries where labor costs are high. But in countries with low labor costs, as a rule, cheaper semi-automatic lines prevail.

You can see how a fully automatic line for the production of veneer and plywood boxes works in Costesti in the following video:

Fedir Rybalko, Head of the Ukrainian Horticultural Association (UHA) in 2019, notes that the veneer box has its advantages, but it also has disadvantages. For supermarket chains in particular, such packaging is not very convenient because it must be constantly removed from the store and then bear the costs of disposal. “In the EU, this problem is easier to solve. There, due to the absence of borders between countries, pooling systems for recycled plastic containers work well. It is more environmentally friendly and significantly cheaper for both the manufacturer and the supermarket chain. It is still difficult for Moldova to implement such a system, since almost all grown products are forced to cross borders, and it is very difficult to resolve the issue of returning containers, both legally and technically,” says Fedir Rybalko.

Speaking about the development prospects of the fruit business in Costesti, Yuri Khurmuzaki, Deputy Director of the Federation of Farmers of Moldova (FARM), talks about the beginning of effective farmer cooperation as the first important qualitative leap in the development of production and marketing of fruits in the region. In his opinion, the cooperation of producers will increase the productivity of vineyards, the quality of products, their safety and presentability, and hence the price. At the same time, storage costs will decrease due to the enlargement of refrigerators and their modernization.

“If you get more high-quality products, store and sell them better, and at the same time reduce costs, then you earn more. We at FARM think that it is thanks to cooperation that Moldovan grape producers will be able to increase their incomes, which will allow them to start large-scale technological re-equipment, find funds for investment in training and, most importantly, in marketing. We think that Costesti will eventually become a kind of business school for all table grapes growers in Eastern Europe and Central Asia. After all, we are always happy to share our experience and are open to continue learning from others,” says Yuri Khurmuzaki.

The EastFruit project, FAO and the EBRD are grateful to the village of Costesti for their hospitality and openness as well as their desire to share experiences with producers from other countries. We wish this unique village further prosperity and development.