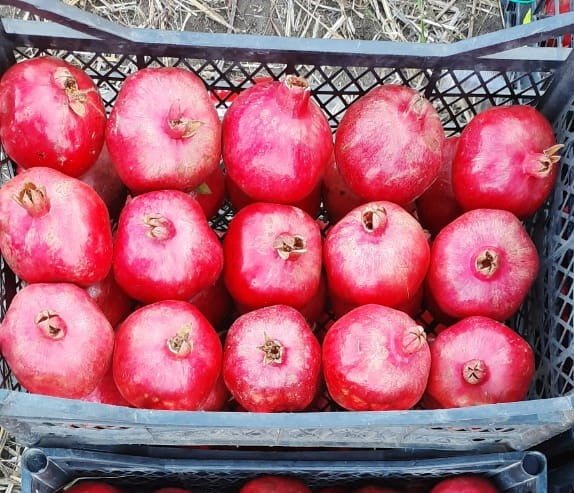 Georgia consumes more than one million US dollars worth of imported pomegranates every season. Pomegranates are produced locally, some even in large-scale orchards. However, they are mainly imported from Turkey and Azerbaijan at this time. Wild crops of pomegranate trees are widespread throughout Georgia, but the optimal climatic conditions for its cultivation are in the Kakheti, Dedoplistskaro, and Sighnaghi municipalities. Imports, as well as local harvesting, began in late September. Today, pomegranates are sold at almost every grocery store and supermarket in Tbilisi. 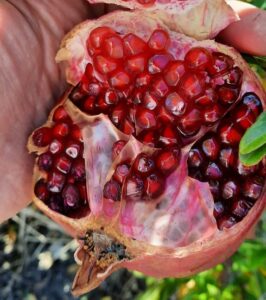 East-fruit contacted one of the largest pomegranate orchards in Georgia to discuss the production process in more detail.

Khornabuji Ltd owns 35 hectares of pomegranate orchards in the Sighnaghi municipality of the Kakheti region. 15 hectares were planted 4 years ago and the remaining 20 hectares 2 years ago. It takes 6-7 years for pomegranate trees to reach their full harvest capacity so their orchards are still young and the yield is small. The owner decided to cultivate pomegranate orchards for industrial-level production because of the favorable climatic conditions in their region.

When cultivating pomegranate orchards that will not be used for processing, be sure to pay special attention to the selection of seedlings. This necessity was learned through their own experience. Initially, they planted seedlings from Azerbaijan on 15 hectares. When the orchard reaped its first harvest, they discovered that they would have to sell more pomegranates to processing companies than expected. The company learned from their experience when expanding the orchard two years ago. This time, they planted seedlings of the Turkish pomegranate variety Hicaz. According to the director of the company Avtandil Jibladze, the new variety has a better appearance and can be stored for a longer period. Also, Hicaz is a sweet-sour variety, which, according to their observations, is more acceptable to Georgian consumers than the relatively sweet pomegranates from Azerbaijan.

The 2020 harvest began in late September and lasted for one month. 60 tons of pomegranates were harvested from the 4-year-old orchard and most have already been sold. Part of the harvest was kept for observation to better explore their storage processes both outside and in cooling storage units to compare the results. According to Jibladze, pomegranates are kept in refrigerated stored at 5-6 degrees. If the temperature drops below 5 degrees, the pomegranates change color and turn white. If kept at ambient temperature with no additional storage means such as waxing, pomegranates can be stored up to 3-4 months.

Khornabuji pomegranates were sold to resellers from the orchard as well as in supermarkets (e.g., Goodwill, AgroHub), and some sent to a processing plant. The delivery price for processing was 0.5 GEL ($0.15), while the prices on the fresh market ranged from 1.5-2.5 GEL ($0.45-$0.75). According to Jibladze, prices up to 1.5-2.5 GEL ($0.45-$0.75) are profitable for pomegranate producers, but we should note that only quality pomegranates are sold at this price. Thus, to get the maximum profit, the share of the potential processed harvest should be less. They do not plan to replace the old seedlings because the company plans to produce pomegranate juice in the future so these will be delivered to the processing company. The project has been written and partial funding has been received. However, the start date for implementing the project is still unknown due to the COVID-19 pandemic.

According to Jibladze, other pomegranate growers have also appeared in the region and there is heightened interest in this fruit. Khornabuji is often contacted for guidance on proper seedling selection and orchard maintenance procedures. Jibladze thinks that if pomegranate production in the country increases, Georgia should raise awareness at the local and export markets, too. Only then will Georgia be able to compete with Turkish and Azerbaijani pomegranates already established on the market. 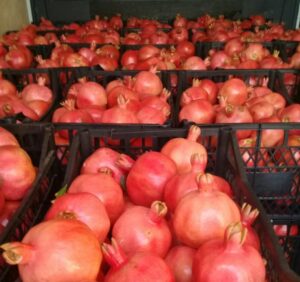